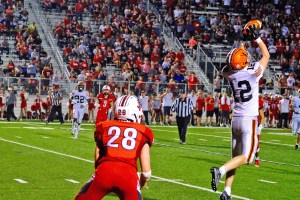 Ironton Fighting Tigers’ defensive back Braden Schreck (12) picks off a pass with 16 seconds to play and secure a 29-26 win over the Jackson Ironmen on Friday. (Photo by Jeremy Holtzapfel) 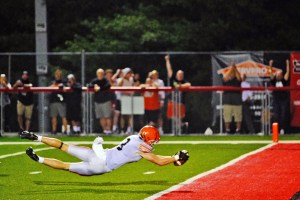 Ironton Fighting Tigers’ wide receiver Ty Perkins (3) makes a diving catch during Friday’s 29-26 win over the Jackson Ironmen. Perkins had a pair of touchdown receptions as he caught 8 passes for 174 yards. (Photo by Jeremy Holtzapfel)

JACKSON — Braden Schreck had his hands full trying to defend two receivers. But, he also filled his hands with one huge interception.

The 6-foot-2 sophomore defensive back came up with a clutch interception with 16 seconds to play that secured the Ironton Fighting Tigers’ 29-26 win over the Jackson Ironmen on Friday.

Ironton had just taken the lead with 1:06 to play. Jackson went to a hurry-up offense as quarterback Jacob Winters tried to rally Jackson with time running out with completion of 22, 15 and 8 yards and the ball was at the Ironton 18.

After an incompletion, Winters threw for Eli Broermann but Schreck stepped in front of the receiver at the 4-yard line for an interception with 16 seconds to play to seal the win for Ironton.

“We were supposed to be in man coverage but one of our guys isn’t in the right spot and I had to play both of (the wide receivers) and the ball just kind of came right to me. He kind of under threw it,” said Schreck.

Jackson started the game by recovering an onside kickoff and going 45 yards in 6 plays as Winters hit Brodie Butcher with a 40-yard scoring pass. Chance Thorpe kicked the conversion for a 7-0 lead with 8:52 on the clock.

It took Ironton just 3 plays to even the score as Tayden Carpenter hit Ty Perkins with a 53-yard touchdown pass with 1:15 on the clock.

Ironton had the ball at the Jackson 11-yard line and was facing a fourth-and-9. But an elderly man was knocked down when two players collided near the sidelines. The man received medical attention and was taken to the hospital.

Following the long delay, Ironton turned the ball over on downs and Jackson used the momentum to score as Winters hit Broermann with a 42-yard touchdown pass with 6:48 to go in the quarter.

The conversion kick failed and it was 20-14.

Ironton drove to the Jackson 27 only to fumble the ball away and Jackson recovered.

Winters got off an 18-yard run to the Ironton 26 and then hit Jake Wood with a 13-yard scoring strike a few plays later and it was 26-14.

But that proved to be all the scoring Jackson would do on the night.

Jackson fumbled the second half kickoff and Ironton recovered at the Ironmen 34.

Carpenter went to Perkins on the ensuing play for a touchdown and Williams’ kick made it 26-21.

Ironton forced a punt and got the ball at the Jackson 49, but the Fighting Tigers’ drive stall at the 14-yard line.

The defense forced a Jackson punt from their own 20 and Landen Wilson returned the kick to the 19-yard line.

Again, Ironton failed to score as they fumbled the ball away at the 1-yard line.

Jackson managed to get the ball to the 7-yard line before punting and Ironton had the ball at their opponent’s 36.

The Fighting Tigers failed to move the ball again and turned the ball over on downs as the quarter came to an end with Jackson leading 26-21.

A 36-yard run by Kyle Staten got the ball to the Ironton 22 and Jackson had a fourth down at the 4-yard line only to fumble the ball away at the one.

After an Ironton punt, Jackson had the ball on the Fighting Tigers’ 34-yard line.

But another fumble was recovered by Ironton at the 28.

Ironton began to move the ball and a 2-yard run by Shaun Terry on fourth down kept the drive alive at its own 48.

Carpenter hit C.J. Martin with a 15-yard pass and Perkins with a 14-yard reception to the Jackson 11.

Carpenter was sacked for a 10-yard loss but he then hit Wilson with a 14-yard pass to the 7-yard line.

Keyes ran for 5 yards and then no gain, Carpenter ran for one-yard to bring up a fourth-and-1 at the 2-yard line.

Carpenter ran for the first down and then Wilson went the final yard for the go-ahead touchdown to cap a 12-play, 72-yard drive.

Carpenter threw to Wilson for the conversion and Ironton led 29-26 with just 1:06 to play.

That set up the final drive and yet another big play by the Ironton defense with Schreck’s interception.

“I think we can make the plays. It’s just trying to get over the hump,” said Schreck.

Ironton (2-0) finished with 364 total yards including 249 passing as Carpenter hit 15-of-26 passes with 2 touchdowns and an interception.

Perkins had 174 yards on 8 receptions with 2 touchdowns. Keyes led the ground game with 90 yards on 19 carries with a TD.