‘This is our future’ 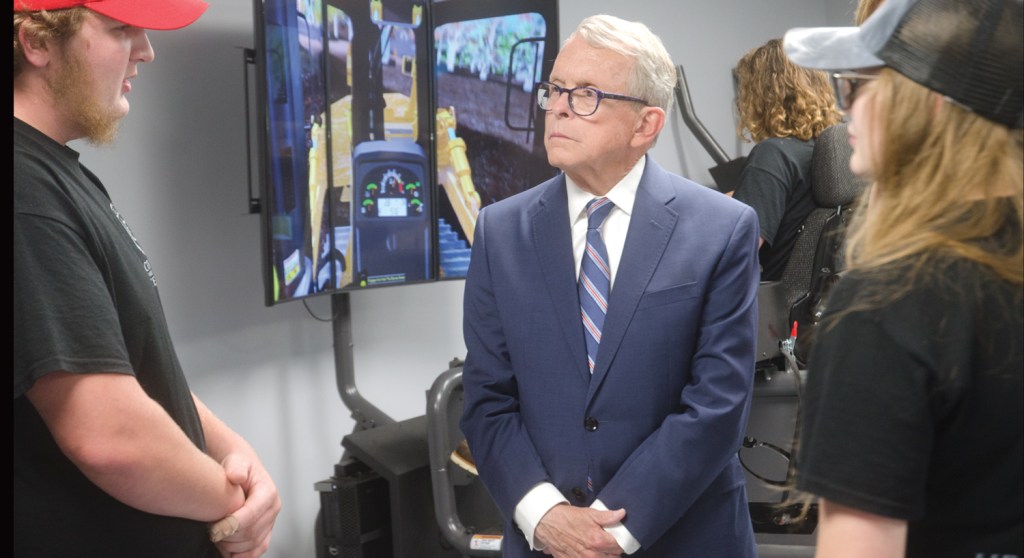 Ohio Gov. Mike DeWine speaks with students in the heavy equipment program at Collins Career Technical Center after they demonstrated the simulators used in classes during his tour of the campus on Wednesday. (The Ironton Tribune | Heath Harrison)

Governor and first lady get up-close view of CCTC programs

GETAWAY — Gov. Mike DeWine said the most important thing adults and educators can do for youth is to not “leave anyone behind.”

“As adults, we need to show them all the options they have,” he said. “That’s one of the great things about a career center.” 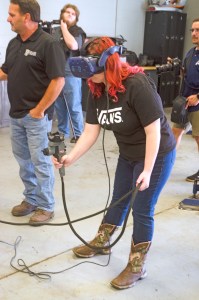 The governor, accompanied by first lady Francis DeWine, was at Collins Career Technical Center on Wednesday, where he was given a tour of the campus and got to see demonstrations by its students in various programs. 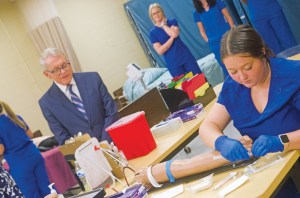 DeWine said he has heard many stories of students who “hated school,” until they went to a career center.

“They found something they love to do and that’s important,” he said to faculty at the end of his visit. “Just knowing where they’re going and learning a skill they like. All the kids we talked to today had a plan.”

At CCTC, the largest career center in the state, he got to see up close the heavy equipment, nursing and auto collision programs.

While visiting classrooms, students showed him things such as a bulldozer simulator and a virtual painting program.

“How many are seniors?” DeWine asked after each stop. “What happens next?”

Many told them of career plans or the next step in their education. In the auto collision program, he was told that one senior already had a job lined up at a Ford dealership.

“I have dealers who tell me all the time that they cant find enough people,” the governor said.

The governor seemed to enjoy roaming the school’s halls, waving in classroom windows, joking with students and catching one group of teens watching him from an adjoining hallway as he passed.

“Well, let’s take a picture,” he said, greeting them and pulling in the first lady and introducing her. “This is my wife, Fran.”

He shook hands with each student as he departed the classroom. One asked him for an autograph, which he obliged, with a flattered laugh.

Altogether, the DeWines spent about two hours at the school, finishing their visit in the Collins Corner Grille, where they were presented with a gift, a metal garden decoration in the shape of Ohio, created by the school’s welding students.

They also were served by, by the culinary students there, which the governor described as “delicious,” showing his empty plate and pointing out that he finished it before departing.
While they ate, they met with superintendent Adam Pittis, who has been with the school for about a year, taking the position at the end of last summer when longtime superintendent Steve Dodgion retired.

Pittis said the school has grown exponentially and now served about 700 students. 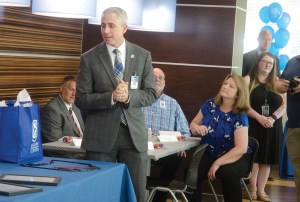 “A lot of programs expanding,” he told DeWine. “We want to meet students’ needs.”

Gathered there were notables from the community, including officials from prospective employers for students, like AEP.

“A lot of these folks will hire these kids, so that’s an important relationship,” Pittis said.

The governor then took questions from the room.

He was asked about Intel’s decision to build a chip manufacturing plant in the Columbus area and what it could mean for southern Ohio.

DeWine pointed out that the plant “will be the largest chip manufacturing plant in the world” and a $20 billion dollar investment for “Phase I.”

“We have 35 suppliers moving to Ohio,” he said. “And we’ve been talking to companies and suppliers relocating or those here who are expanding.”

He said the biggest criteria for companies is whether they can “find enough employees to fill a skill set,” as well as “having skilled workers or workers to train.”

Population density will also be a factor in attracting companies, he said.

“Whether they think they can pull enough people or it’s not dense enough,” DeWine said.

He said it is important that local governments “continue talking” to companies like Intel and that they have sites to build on that are “ready to go.” 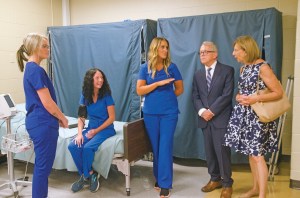 Ohio Gov. Mike DeWine meets with instructors and students in the nursing program at Collins Career Technical Center during his tour of campus on Wednesday. (The Ironton Tribune | Heath Harrison)

DeWine was also asked about the $500 million investment in the state’s Appalachian counties that he recently signed into law after passage from the state’s General Assembly.

“We have a half billion dollars set aside,” DeWine said. “The idea was for two phases — one for planning and one for execution.”

Of the planning phase, he said, “what we’re starting to see is what we wanted to see – communities are coming together.”

DeWine pointed out that due to the nature of the federal funds, they had to be put to use for things that are related to the pandemic. He said some communities are using them to revitalize downtowns, while others are using them to expand broadband service.

“There is no right answer,” he said. “We didn’t want to tell people how to spend it. We need to allow people in communities to figure out what they want to do.

He said this approach is due to Ohio being a “very, very local government state.” 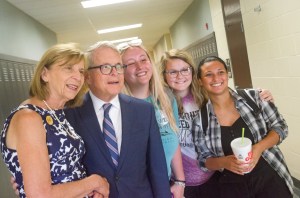 “We have more forms of local government – townships, villages, school districts — it’s who we are and what we do,” he said. “And we tell our team to rely on local communities to come together.”

One local elected official in the room was Lawrence County Common Pleas Judge Andrew Ballard, who shared with the governor his work with CCTC.

Ballard said, after establishing the county’s first drug court, he was able to work with CCTC to allow those who enroll in the court to waive their community service requirement in exchange for enrolling in education at the school. 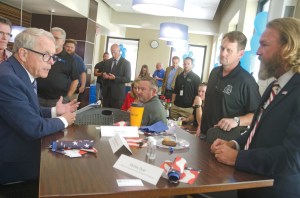 “This gives them an incentive,” Ballard said. “And we have 16 lined up so far.”

DeWine approached Ballard after the event and thanked him for sharing a “fascinating story.”

“It’s great and it makes sense,” he said.

Ballard credited school officials and said the program was the “brainchild” of those working there.

Before departing, DeWine said he was impressed by what he saw at CCTC.

“This is our future,” he said of the students. “It’s always fun to talk to the young people and find out what they’re doing. Fran and I always learn things when we travel.”

He said he was particularly struck by so many who had a career plan in mind.

“One lady said she is ready to go work on a pipeline,” he recalled. “She was quite amazing.”

He said he was upbeat about what years to come have for the state.

“We’re creating more jobs than we have people,” he said. “I’m very optimistic about our future, and this includes southern Ohio.”

In addition to his visit to CCTC, the DeWines also made a stop in Coal Grove, where, at the invitation of South Point Mayor Jeff Gaskin, they met with officials from the villages of South Point and Coal Grove, as well as Lawrence County Economic Development Corporation president Bill Dingus and employers from The Point industrial park.