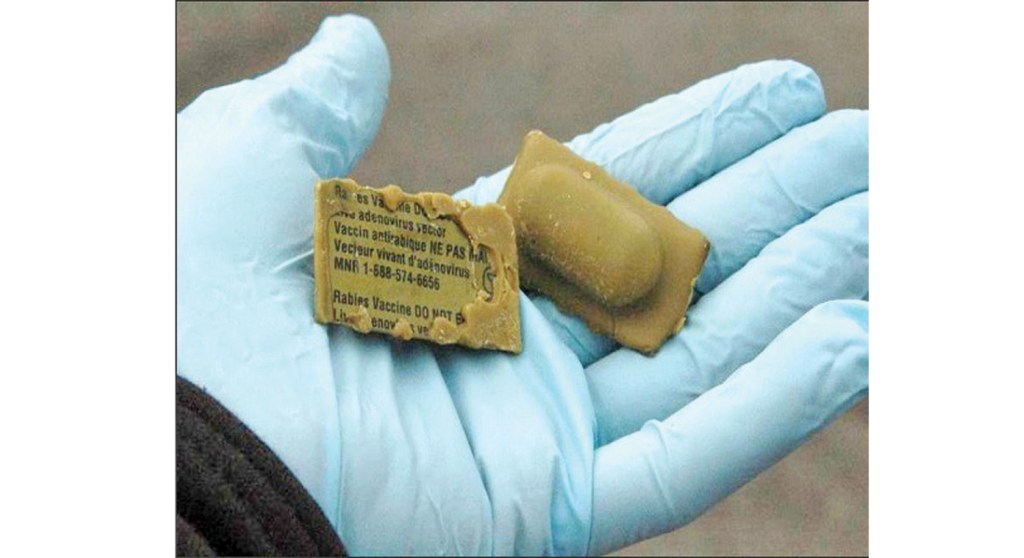 Baits are dropped in Ohio to immunize wild raccoons for rabies. (Ohio Department of Health)

NEW ORLEANS (AP) — The U.S. Department of Agriculture has begun scattering millions of packets of oral rabies vaccine from helicopters and planes over 13 states from Maine to Alabama.

The major aim is to keep raccoons from spreading their strain of the deadly virus to states where it hasn’t been found or isn’t widespread, said field trial coordinator Jordona Kirby.

The USDA is also continuing tests of a vaccine approved in Canada to immunize skunks as well as raccoons, said Kirby of Wildlife Services, which is part of the agriculture department’s Animal and Plant Health Inspection Service.

Rabies is spread through an infected animal’s saliva, usually through bites. However, saliva that gets into the eyes, nose or mouth can also infect someone, according to the Centers for Disease Control and Prevention.

Thirteen people in South Carolina were considered potentially exposed in March because they had bottle-fed or given medicine to a sick calf that turned out to have rabies, said Dr. Michael Neault, the state veterinarian.

Globally, the virus kills 60,000 people a year, most bitten by dogs, the World Health Organization states.

That’s about the same number that get shots to prevent rabies in the U.S. after being bitten or scratched by an infected or possibly infected animal, according to the CDC.

State and local pet vaccination laws mean the virus is mostly spread by wildlife in the U.S.

The national rabies control program started in 1997 in Texas, where coyotes were spreading the canine variant of the virus, Kirby said.

She said vaccine drops eliminated that variant in 2004. Three years later, the CDC declared the nation free of canine rabies.

Canine rabies is among more than 20 variants — seven found in terrestrial mammals and more than 13 in species of bats, said rabies control program coordinator Richard Chipman.

A bite from an animal infected with any variant can make any other mammal sick. Scratches occasionally do so, since animals lick their paws.

And Texas, with help from USDA, dropped 1.1 million baits along the Mexican border in January to keep coyotes from bringing the canine variant back.

Raccoons are the main rabies reservoir in 18 states along and near the East Coast and skunks in 21 others, according to data from 2020, the latest year available.

But since nearly all of the 40-plus bat species found in the U.S. eat insects and the rest drink nectar or eat fruit, oral vaccines would be much trickier.

Some scientists have speculated that bats could be vaccinated during hibernation, perhaps with a fine mist or with a gel that could be transferred from bat to bat, Chipman said.

Early research is testing the idea in vampire bats, which live in Mexico and Central and South America and might spread such a vaccine within a colony by grooming each other.

A rabid fox on Capitol Hill was caught less than 24 hours after the first report in April.

By then, about a half-dozen people had reported bites or nips to U.S. Capitol Police, but others may have gone to other agencies, a Capitol Police spokesperson said by email.

Raccoon rabies campaigns started in August in West Virginia and southwestern Virginia. The 348,000 Raboral V-RG baits in Maine and 535,000 in the three other states are being dropped from planes in rural areas and from vehicles in urban and suburban areas.

In all, about 3.75 million packets — coated with a fishmeal attractant or encased in 1-inch fish meal cubes — will be distributed in nine states, ending when 1.1 million are dropped in Alabama in October.

The vaccine has been found safe for more than 60 kinds of animals including domestic dogs and cats.

Eating a large number of vaccine packets might give dogs an upset stomach but wouldn’t cause any permanent problem, APHIS says.

About 3.5 million doses of the experimental vaccine Onrab are being distributed in parts of Pennsylvania, West Virginia and Tennessee — which also are getting the approved vaccine — plus four other states.

Onrab comes in blister packs with green, marshmallow-flavored coating. Wildlife Services hopes it may be approved next year in spite of lingering pandemic-related delays.