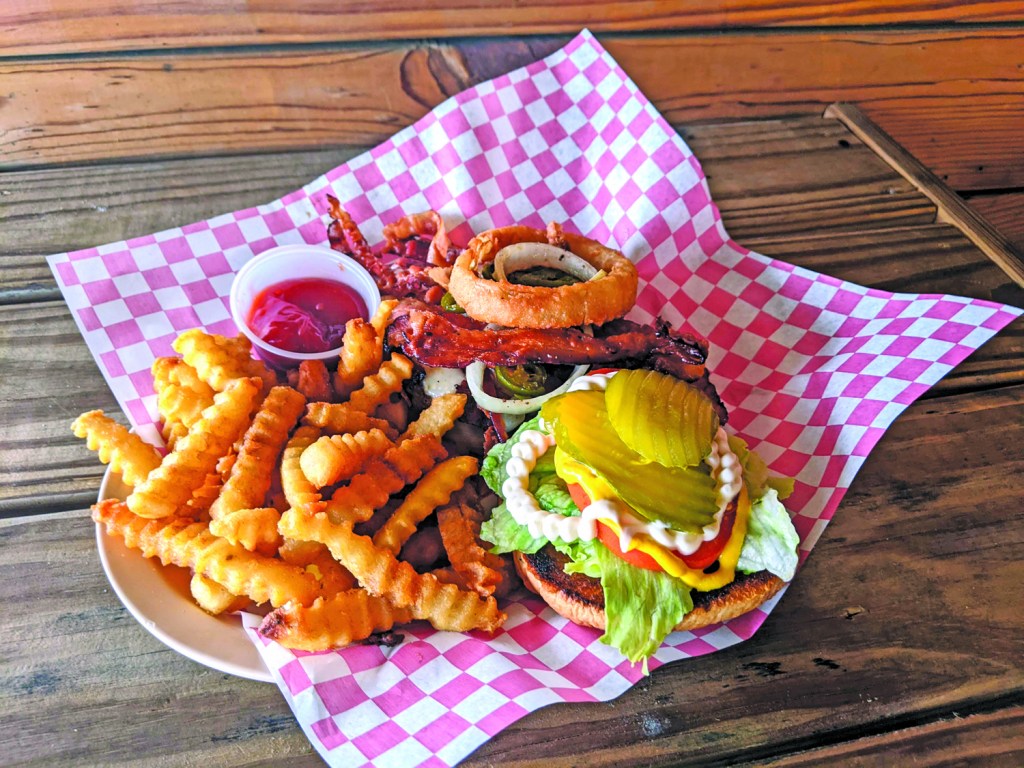 “The Heather Burger is my new signature burger,” said Heather Jenkins, who is over the kitchen at The Auger in Ironton. “It has grilled onions, jalapenos, pepper jack cheese, bacon, lettuce, tomato. Everybody seems to love it,” she said. 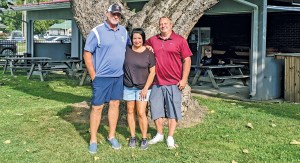 From left to right, Phil Hieronimus, Heather Jenkins and Josh Moore of The Auger. (The Ironton Tribune | Sarah Simmons)

While she just took over in September, she has known her way around the kitchen for quite some time.

“I’ve worked at the Fuzzy Duck before, which has been about 12 years ago, but that’s where I started out cooking,” she said.

The menu features an array of appetizers, including the popular stuffed mushrooms with a honey mustard sauce made by Jenkins, which she says compares to the CR Thomas recipe. “I make all of our sauces.”

While the menu is new, some of the fare includes a bit of history.

“Larry and Wanda McKenzie were the owners of the bar. In 1973 they bought it, brought it down to this location. I’ve known them since 1975,” owner Phil Hieronimus says of their namesakes, the Wanda Burger and Larry Burger.

“The reason I bought the bar was because it was the Auger Inn. I had my first legal beer here in 1975,” said Hieronimus.

While he has made improvements, such as installing a U-shaped bar with more seating, constructing a patio with garage doors to keep it warm in the winter and adding a parking lot, he decided to keep some things as they were. 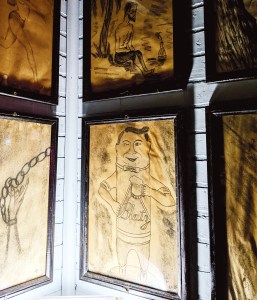 Dozens of drawings can be found on the walls of The Auger. (The Ironton Tribune | Sarah Simmons)

This includes decor. Dozens of drawings adorn the walls of the establishment. Hieronimus said they were created by Bruce Adams.

“Those drawings all were done at the old Auger Inn across from East End Hardware when the Auger Inn was down there,” said Hieronimus.

Of the inspiration behind the drawings, he said “He (Adams) was sitting, getting inspiration off of seeing somebody at the bar. I’ve had people offer me thousands of dollars for the collection, but that is The Auger. I won’t sell those.”

Visitors will find live music, daily specials from the kitchen, including a quesadilla on Wednesdays that Jenkins says is her favorite, and games with prizes, such as music bingo. And Hieronimus says you’ll also find friends.

Of the patrons he says, “Either I will know who they are or I will know who their dad and mom is. It’s the same local crowd and that’s why I bought it. It’s a great place to make new acquaintances and get back with the people you’ve known forever. If you want to see everybody that you’ve ever known in Ironton, come here on the Wednesday before Thanksgiving. It’ll be elbow to elbow,” he said.

And you can find Jenkins Monday through Saturday from 11 a.m.–6 p.m.

“Heather works six days a week during the day, and she is an awesome cook. I wouldn’t trade her,” said Hieronimus.

They offer takeout for those calling ahead. “Come see us,” said Jenkins.