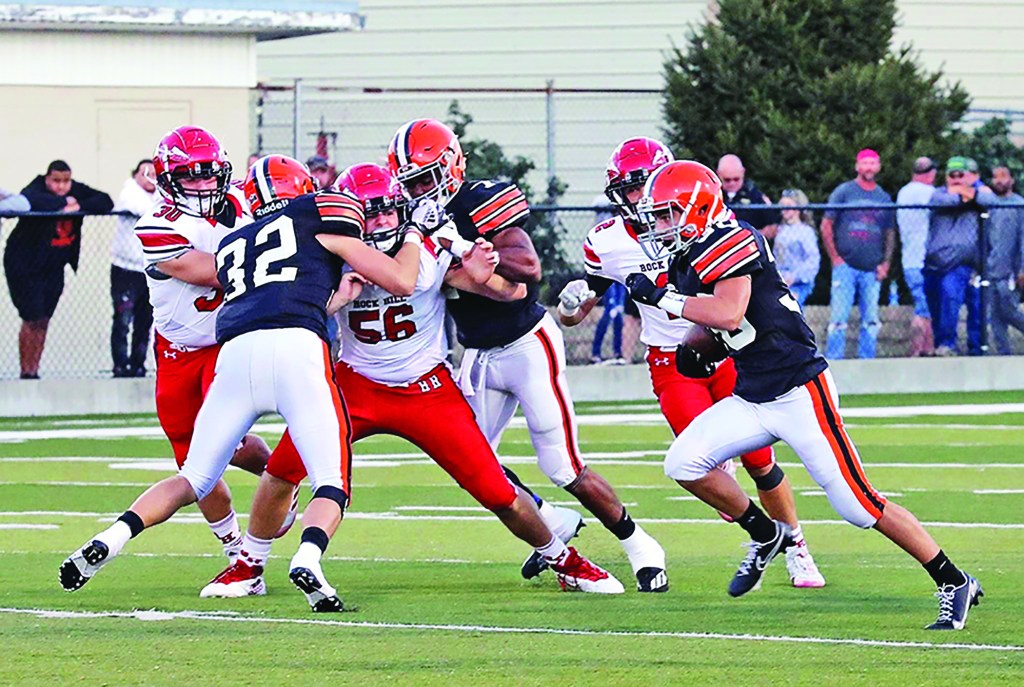 Shifting to fullback, Barnes opens a hole for running back Ben Sloan. (Photo by Tim Gearhart)

Anyone who mentions the name Barnes in Ironton automatically thinks or talks basketball.

However, there is always an exception to the rule and there is one current exception that can dominate the conversation in the Barnes’ household as well as for any Ironton Fighting Tigers’ football fan.

Instead of describing him as the black sheep of the family, he’s more like the lone wolf.

“Last year was the first time I had played basketball in three years,” said Barnes, who admitted when there are backyard games that his participation can best be described as “not much.”

There is some history of football in the Barnes family. Keith Barnes — longtime accountant in Ironton — and his twin brother Ken were running backs for the Fighting Tigers. Keith went on to play at Marshall before suffering a career-ending knee injury.

“My mom’s side loves football. My dad’s side has always been basketball. All except my grandpa (Keith Barnes) and he played football at Marshall,” said Barnes whose grandfather passed away several years ago. “He was around for the younger years. From middle school on he wasn’t here.”

And while other members of his family as well as uncles, aunts and cousins watch college and pro basketball, Barnes does most of his television game viewing on a different schedule.

“I normally watch (games) every weekend. I watch all the college (football) games. I don’t really get into pro (NFL).”

Barnes is a 6-foot, 210-pound senior linebacker and three-year starter who is not only the most experienced player on the Ironton defense but probably the most talented. He had the fortune of playing with some outstanding linebackers including current Ohio State linebacker Reid Carrico and Tiffin linebacker Cameron Deere.

“Playing with the older guys when you’re a young guy is a big deal. You’ve got Reid (Carrico), Cameron (Deere) and Dalton (Crabtree) who all started since they were sophomores. They coach you up really well and that’s my role now. I’m a coach on the field basically,” said Barnes.

Barnes will play both tight end and fullback on offense this season.

“I think I’m in good enough shape to play both ways,” said Barnes. “There’s some specials of the tight end, but most of the time it’s rhythm rout. You’re the guy sitting in the zone if (quarterback) Tayden (Carpenter) needs to get it out of his hands quicker.”

Even though Barnes will log playing time on offense, his heart remains on the defensive side of the football.

“You’re involved in the play on every play. Every play you’re in contact,” said Barnes who shifts from the outside linebacker position to inside.

“Everything is in front of you know. You have more pass responsibility playing outside. Now, you’re run game first.”

Barnes plans to play at the University of Dayton which is an NCAA Division I-A non-scholarship program and members of the Pioneer League.

But before turning his thoughts to next fall and his college career, Barnes is focused on the upcoming season and helping the Fighting Tigers achieve their goals.

The team suffered some heavy losses but Barnes thinks this team can reload and step up.

“We’re more athletic than last year. Our line is younger but more athletic. They can move. That’s one of the bigger pieces we’ve had to make this year. We should make a (deep) run the year,” said Barnes.

The loss of district Co-Defensive Player of the Year Nate Cochran leaves a huge void in the Ironton defense. Cochran was double and even triple teamed on virtually every play which helped free up the linebackers to make plays.

“In some ways it’ll hurt not having Big Red in front of me, but also on the other side of it, it could be great because you have quicker guys in front of you who are getting on the quarterback and he’s throwing  routs right in front of me,” said Barnes, who expects to drop into coverage more often.

Although he is adamant about playing football, Barnes is open to doing another sport in the winter and it might even be basketball again.

“I’ll probably play basketball again this year. I’ll try to get into as much as I can for my senior year. Wrestling is another one I might end up playing,” said Barnes.

“(Family members) always try to talk me into (playing basketball). I’ve just always stuck with football and I’ve gotten better at it. I just like it so much more.”

Which only goes to show that you can’t tame a lone wolf.