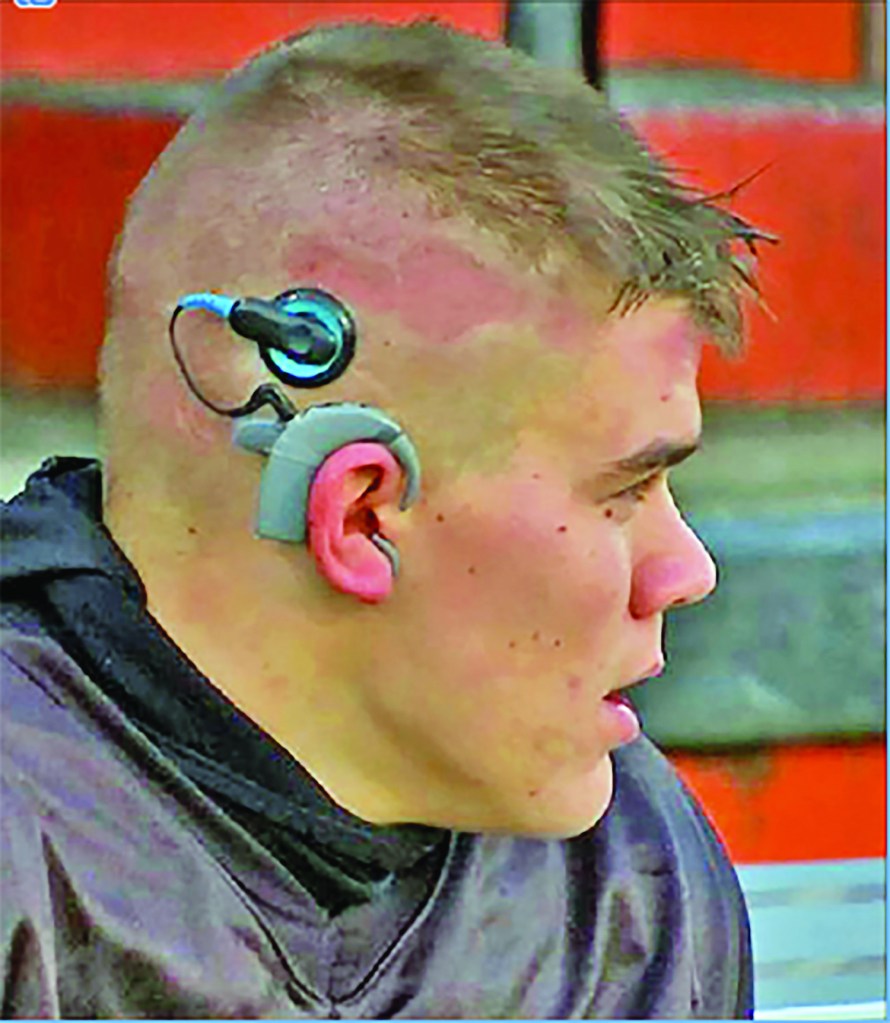 Ironton Fighting Tigers’ senior quarterback Tayden Carpenter became deaf at the age of two, but a surgically implanted hearing aide has enabled him to hear and play football and other sports.

Players at a home game love to hear the roar of the crowd. Players on the road hate to hear those same fans cheering at near deafening sounds.

For Tayden Carpenter, it all sounds good to him.

The 6-foot, 195-pound senior quarterback for the Ironton Fighting Tigers is much like everyone else on the team although his accurate, strong left arm makes him stand out among some other players. But Carpenter is different from other players because he’s deaf.

Only through the miracle of medicine and hearing aids implanted in his skull is Carpenter able to hear.

“When I was first born, I just lost a little bit. I had to wear hearing aides. And then one morning my mom came in my room and I just completely stopped hearing. I was like one year, two years old. I couldn’t hear at all. We went to the doctor and I was completely deaf,” said Carpenter.

“So, they had to do a surgery when I was three and they cut this hole and put like a magnet inside and helped me hear.”

But just being able to hear wasn’t the end of Carpenter’s ordeal. There would be speech therapy for many years and it is a constant battle he will face the rest of his life.

“From when I was four until I was eight, I had to go to like a pre-school at Marshall and they helped me a lot. Just doing speech therapy every day is a blessing that they did that. It helped me big time,” said Carpenter. “In kindergarten it helped me progress all the way up.”

Much of Carpenter’s ability to overcome his handicap has been his gritty determination coupled with a strong dose of family support.

“My family has done the most. I have trouble speaking and if I say something wrong, they’ll always correct me. I mean, I hate it but it helps me a lot. There are times I get mad, but it means a lot that they always help me. They don’t have to do it, but they try to help me and it means a lot to me,” he said.

“And all these coaches I’ve had throughout the years have been a blessing. I’ve had some great coaches who have helped me big time. And not just sports, but in life. My eighth grade basketball coach (John Large) would always take us at Thanksgiving and help the homeless. It was an eye-opener. It’s not all about sports. You can do more in life. You can help others. It meant a lot what he is doing.”

If having to deal with the loss of hearing wasn’t enough, there have been more obstacles for Carpenter to overcome during his short life.

“That still hurt a little bit though. It was hard. I could see you but it was still messing with the reflection (off the shield),” said Carpenter.

One thing that helps Carpenter is his ability to read lips, but that was also erased in most instances due to COVID.

“Yes. Very well,” said Carpenter when asked about being able to read people’s lips. “It messed with me during COVID because of the masks.”

So, can Carpenter use his lip reading ability on defense to read what the opposing quarterback is saying in the huddle?

“I’ve never really done it. I always wanted to try it,” Carpenter said with a grin.

Injuries have plagued Carpenter during his football career. He suffered a broken collarbone as a freshman but came back to start as a sophomore. His junior year saw him get injured twice and only play in a little more than five games.

“My freshman year, it was coming in as a new person. It’s completely different than middle school. You’re just trying to work you butt off and get things going,” said Carpenter.

“Then when you get to your sophomore year, you’re like ‘OK, I get the hang of it.’ I started my sophomore year and went to the state (finals) so that was nice. It helped a lot. My junior year, I can do more than that. I just tried to help my team win but I got hurt my junior year,” said Carpenter.

“When I got hurt, that put things in perspective. I said, ‘This is my last year. I need to lead this team.”

Staying healthy the entire season his sophomore year let Carpenter play all 10 regular season games and the five playoff games that included that state championship at Massillon. Ironton lost the title game to Kirtland and finished 13-2.

“It’s kind of nerve-racking. The day before I went over all my plays and said, ‘I know what I’m doing. I just have to go out and perform.’ As soon as you step out there it was like everything went away. Man, it’s an unreal atmosphere, especially the stadium we played at. It’s just massive. As a sophomore, it’s completely different than any other game you’re watching,” said Carpenter.

Last season, Carpenter suffered a hip injury prior to the start of the season. He attempted to play in the opener against Wheelersburg but couldn’t go past the second series and was sidelined until week five.

He returned for the 10th game at home against Portsmouth but didn’t make to halftime as he suffered a broken foot and missed the rest of the games and the playoffs.

“It’s tough, but my whole life I’ve been dealing with overcoming obstacles. Ever since I was younger, it’s not going to be easy the whole way so you’re going to have to fight through it,” said Carpenter.

“That (foot injury) actually kind of helped me because after all, I’ve got guys who can play for me. I’m going to get hurt and I just have to come back and battle. A minor setback is a major comeback.”

One problem about football is wearing a helmet and how it can obstruct your hearing. Carpenter said that problem has been resolved for the most part.

“Playing football and wearing the hearing aide was a concern, how it might affect him, but things went well. In fact, things improved when the F-7 helmet was introduced and he never had to take his helmet off to hear anything,” he said.

“Now, if I took a shot (the helmet) was going to come off. I just gave it to the sidelines and I could read the coach’s lips and what he was saying so I could get back in the huddle and tell everyone the play.”

While mother Johnda and father Trent and the rest of the family may be worried about Carpenter when he’s on the field, his only concern is helping his team win and achieve their goal of a state championship. As a senior and the quarterback, Carpenter will need to be a leader, but he said there is no shortage of leaders in the senior class.

“There’s me, but we have Trevor Carter and lots of kids who are D1 football players. You’ve got Ty Perkins, Jaquez Keyes, it’s just going to be all of us coming together,” he said.

Although winning a state title is the ultimate goal, Carpenter said the team has been taught to take care of business and not look ahead. It’s the old cliche of taking it one game at a time.

“We go through that every day at weightlifting. We take it one day at a time. We say get one percent better every day. We just focus on the first game so right now. We just focus on Wheelersburg. We just do that and it helps us get through the season and not overtaxed and not worry about the next game,” said Carpenter.

Being a senior, Carpenter will have to contend with separating the present from the future. College is on the horizon and he’s already being courted by schools including the Ivy League.

“The only offer I have so far is Charleston. It’s a D2 school. I talk to them a lot. I love them. It’s a nice school,” said Carpenter.

“The main schools that talk to me a lot are the Ivy League schools. You’ve got Harvard, Yale, Princeton and all of them. I have a good relationship with them. Yale has been the best so far. Their coach textes me all the time.”

Much of Carpenter’s ability to overcome his handicap has been his gritty determination coupled with a strong dose of family support.

“And all these coaches I’ve had throughout the years has been a blessing. I’ve had some great coaches who have helped me big time. And not just sports but in life. My eighth grade basketball coach (John Large) would always take us at Thanksgiving and help the homeless. It was an eye-opener. It’s not all about sports. You can do more in life. You can help others. It meant a lot what he is doing.”

Sounds like Tayden Carpenter is not only overcoming his obstacles but helping others do the same.

Cheers to him from both the home and visiting crowd.