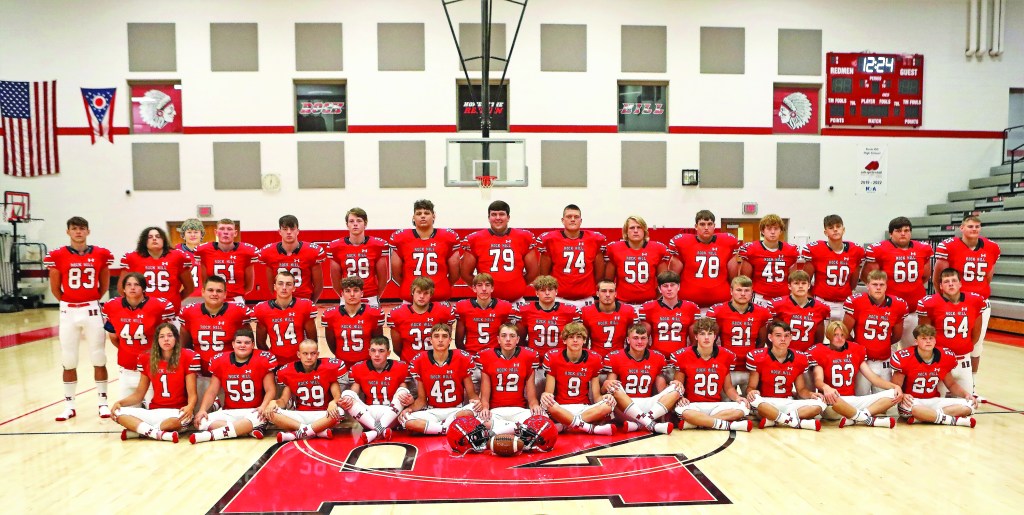 PEDRO — When talking depth, it usually means whether the water is shallow or deep.

If that is applied to the Rock Hill football roster, the Redmen would be drowning in very shallow water.

Heavy losses on the offensive and defensive lines leave sixth-year head coach Mark Lutz treading water as he looks not only for replacements but backups in the trenches.

Not only that, he must find a new quarterback and his backup.

“We’ve got a lot of holes to fill and a lot of young and inexperienced players who are going to have to step up and fill those holes,” said Lutz.

“No matter how good a player looks in practice, it’s a whole new world when the scoreboard comes on and there are people in the stands.”

The Redmen were 3-5 last season and struggled early after having to miss their first two games due to COVID-19 shutdown. Rock Hill will need to play its three pre-conference games to get some valuable experience for taking on its Ohio Valley Conference opponents.

“We were playing pretty well coming out of our scrimmages last year and then we had to shut down for two weeks with no practice and no games. It really set us back. We can’t afford that with such a young and inexperienced team,” said Lutz.

There is a music group called ? and the Mysterians and the lead singer Rudy Gonzales actually changed his name legally to Question Mark.

The Rock Hill quarterback situation could be a subject of a song for the group as Lutz looks for a replacement for a third straight season.

Senior Brayden “Larry” Adams (5-10, 150) is the frontrunner although he missed almost all of last season with an injury. Adams could give the Redmen a run-pass option style quarterback with his exceptional speed that makes him one of the fastest players in the conference.

“Both are working hard and improving every day,” said Lutz. “Adams is a senior and he can be a dual threat and help open up our offense. Cox has looked good but he’s never been under center in a varsity game.”

If there is a strength on offense, it will come from the backfield that has some speed and it does have some depth.

Senior Chase Delong (5-9, 170) is one of the quickest runners and has good speed. He can also play fullback and halfback. Another candidate is sophomore Gage Clutters (6-0, 245) who has good size and good speed.

There are some speedy halfbacks led by shifty senior Kordell French (5-8, 155) to team with Delong and Jiles for a talented trio. Another candidate is sophomore Anthony Stamper (5-10, 155) who is one of the fastest players on the team.

“We have some speed in our backs, but how well they perform will depend a lot on how well our offensive line does,” said Lutz.

Three of the seven linemen return to a group that looks to be young and inexperienced.

Back for his third year as a starter is senior Andrew “The Giant” Medinger who stands 6-foot-5 and tips the scales at 335 pounds.

Medinger is one of three returning starters along with senior Landon Harper (5-8, 255) who back at the center position and senior Dave Jenkins (6-1, 230) who returns at guard.

“All three of those seniors have improved and we’ll count on them to help the younger guys. Our size is pretty good from tackle to tackle, but there’s not much experience from end to end,” said Lutz.

This is an area of concern beginning from the starting standpoint.

Senior Chanz Pancake (5-9, 170) split time between split end and tight end. In fact, the Redmen rotated three different players at the one end.

Braydon Malone was a two-year starter at the other end but has graduated and senior Zaylor Gregory (6-1, 195) could fill that hole. Gregory did not play last season.

But senior Drake Smith (6-4, 185)  is taller and added some weight from last season and could step in and play. Other candidates are sophomore Zach O’Bryant (6-3, 170) and junior Cameron Stevens (6-2, 160) who was at Sugarcreek Christian Academy last season and did not play football.

“We have some players with potential but no game experience. It’s just a matter of finding out who will step up and do the job,” said Lutz.

Gregory, Delong, Smith, O’Bryant and Stevens will all be in the rotation at defensive end. The versatile Delong can also play inside at nose guard or shift to cornerback.

Gregory, O’Bryant, Smith and Stevens all have good height and will be prototype pass rushers.

There will be a plethora of defensive tackles who will rotate depending on the situation.

Jenkins and Clutters should top the list but Harper figures to play along with gritty sophomores Grant Bevins (5-8, 180) and Mason Hanners (5-10, 160).

“We don’t have much experience up front,” said Lutz. “We want to use a lot of people and keep our guys fresh.”

Kidd is in his third season at linebacker and gives the Redmen a solid player in the middle.

“Skylar has a lot of experience and he knows where everyone should line up and where they should go,” said Lutz.

Jiles is another returning starter who can play on the inside or outside.

“Jiles and Kidd will both hit you,” said Lutz.

Short got limited playing time as a backup last season but should move into a starting spot. Harper and Bevans can also play up as a linebacker along with Murphy. Short, Harper and Murphy can all play defensive end, too.

This is the area with the most experience but has the least amount of depth.

French and Adams are both back at safety while Pancake and senior mini-cyclone Brock Friend (5-7, 140) return at cornerback spots.

The other secondary candidates will be either Stamper, Hanners or freshman Preston Malone (6-0, 170).

“We have some speed at each position and we have some experience with our older guys, but we just don’t have much depth,” said Lutz.

The punter will be freshman Christian Depriest (6-2 230) or junior Landon Rose (5-7, 150) while the placekicker should be Hazley Matthews who was a standout for the girls’ basketball team. Matthews is a soccer-style kicker who has hit from 40 yards in practice.

“Our kicking game could be better, but again, we have young players who haven’t had any experience kicking in a varsity game,” said Lutz.

Lutz doesn’t see much change at the top of the Ohio Valley Conference.

“It’s Ironton until someone beats them and that could be tough this year. They have a ton of skilled players and some good, young linemen. They’ll be hard to beat,” said Lutz.

“Fairland will be a solid team again. They lost some key skill players and good linemen, but they had a lot of depth. Portsmouth lost (Drew) Roe but (Tyler) Duncan is a good athlete at quarterback. They’ll be better than people think.

“I think there will be some teams who have improved. Coal Grove has a lot back and will contend. South Point has a lot back, Gallipolis has a new coach but they have some great skilled players plus (Isaac) Clary is back on the line. I think Chesapeake is young but they should be better. It’ll be a tough league.”