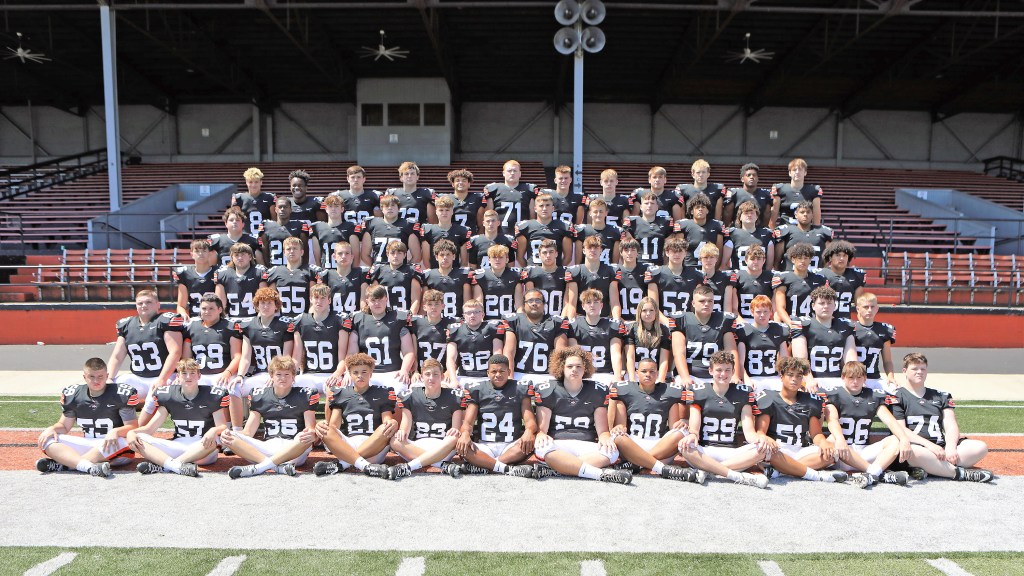 “Rising up, back on the street

Did my time, took my chances

Went the distance, now I’m back on my feet

Just a man and his will to survive

So many times it happens too fast

You change your passion for glory

Don’t lose your grip on the dreams of the past

You must fight just to keep them alive

It’s the eye of the tiger

It’s the thrill of the fight

Rising up to the challenge of our rival

And the last known survivor

Stalks his prey in the night

The song “Eye of the Tigers” sung by Survivor and written by Jim Peterik and Frank Sullivan has been played at Ironton Fighting Tigers’ football games in the past, but never has the message been more relevant than this season.

With heavy losses on the offensive and defensive lines as well as at linebacker, Ironton will be looking to fill the holes with a lot of inexperienced players, some young and some old.

But Ironton fifth-year head coach Trevor Pendleton has a plethora of skilled players to help nurse the new players along until they can get their feet wet. He also has a team with a mental outlook that he believes will overcome its shortcomings.

“I think athletically we’re very talented and I think they’ve taken the challenge even better than I thought they would. They don’t feel the pressure of replacing those (graduated players), but they know how important it is to pour everything into replacing these guys,” said Pendleton.

“I definitely think it’s going to be different. It’s going to look different schematically and physically than in years past. I don’t necessarily think that’s a bad thing. I think having a veteran secondary we can do a lot of different things, disguise coverages, give different looks,” said Pendleton.

One key position with experience is quarterback where senior three-year starter Tayden Carpenter (6-0, 185) is the frontrunner but he’ll be challenged by junior Bailey Thacker — a transfer from Ashland, Ky. — and sophomore Braden Schreck (6-2, 175) who started Ironton’s first two playoff games due to injuries and produced a pair of wins.

Carpenter battled injuries last season, suffering a hip injury that kept him out of four games to start the season and a broken ankle in game 10 that ended his season.

Pendleton said Carpenter has recovered and has returned to form.

“Tayden has worked hard coming off a couple of injuries last season. He has experience, he’s a good athlete and he is a dual threat,” said Pendleton.

“The sky’s the limit for Bigs (Schreck). It don’t matter where you put him. He just kind of adapts and reacts. It’s just starting to click with him how good he can be. Thacker has been impressive in our summer workouts.

“I told all three of them guys when you’re not playing quarterback, jump in and play receiver, play a position. Bigs plays every position really well. It’s pretty impressive.

The offensive line took a big hit with graduation. Junior Noah Patterson (6-2, 225) is the lone returning starter and he’ll have to be a leader for the players who fill in the other open positions.

“You’re replacing four starters and guys who were not only one-year starters but multi-year starters. We’ve had a lot of guys step up. Obviously, Noah Patterson started every game last year. He won’t be playing center this year unless it’s a dire situation. He’ll play tackle or maybe guard,” said Pendleton.

With so many young players, Pendleton is looking to platoon as much as possible and possible be able to play on both sides of the ball when needed in the future.

“Layne and Gossett started some games, the Moore boys played some varsity minutes. We’ve got a lot of young guys who worked really hard this offseason. I told them not to be shy. They’re going to have the opportunity to step up and play whether it’s Jaxon Johnson, Creighton Bryant, Johnson Bryant, Bump or Fitzpatrick. They’ve put in the time and the work, now it’s time to show it on the field” Pendleton said.

Senior Lincoln Barnes (6-1, 210) is a three-year starter on defense but played some tight end as well last season. Pendleton said the versatile Barnes will play some at tight end and fullback.

Senior DeAngelo Weekly (5-11, 220) is another possibility at tight end and even fullback.

The wide receiving corps is led by senior Ty Perkins (6-3, 190) who was All-Ohio last season as he led the team in receiving and has committed to the Cincinnati Bearcats.

“Honestly, Perkins has probably made the biggest change of any kid in our program in the last 12 months. He had some struggles at times last year, but you saw how talented he was. It was just a matter of when it would all click and over this offseason it did. It clicked,” said Pendleton.

This is a position that is stacked.

Leading the way is senior Jaques Keyes (6-1, 215) who has already given a verbal commitment to Wisconsin. Keyes is a slasher who had some big games last season including the playoff game against Wheelersburg.

Senior Landon Wilson (510, 170) was a wide receiver last season until the Fairland game. With injuries taking their toll, Wilson was inserted into the backfield in the second half and rushed for more than 100 yards in a 20-14 overtime win.

Senior Amari Fielder (5-10, 180) played at Huntington, W.Va., last season before moving to Ironton and joins senior Trevor Carter (6-2, 210) to give Ironton a pair of backups who could easily start and both possess excellent speed.

Carter lettered in both his freshman and sophomore seasons before sitting out last year with a shoulder injury.

“He had a great year as a sophomore but was hurt last year,” Pendleton said of Wilson. “Fielder will be able to play some running back and some receiver. We’ll be able to rotate a lot of guys. We’re going to have some depth and rotate and keep guys fresh.”

Pendleton said everything is an open competitive with Weekly, Patterson, Layne, Thacker,  Bump and sophomore Jesse Copas (5-10, 185) all in the mix.

Cochran drew double and sometimes triple teams from opposing offensive lines that helped free up the linebackers to make plays.

Weekly started every game last season on the defensive line and will be counted on to provide leadership along with big plays. Patterson played some on defense and should be one of the tackles.

Layne is expected to be one of the defensive ends and Thacker may get the starting nod.

One player who could find his way into the lineup at nose guard or linebacker is junior Ben Sloan. The 5-10, 170-pound tiger cat is a talented wrestler with good quickness and strength.

“Ben has played some nose, but with some guys we have banged up, Ben’s gone back to linebacker and actually done a good job in the Waverly scrimmage. He’s a guy who’s come a long way and a guy we can play in multiple positions as well,” said Pendleton.

Barnes will be at linebacker for the third straight season and looms as one of the best at his position in the area.

With Carter healthy, he will be back in the starting lineup. Carter has already committed to play for the Cincinnati Bearcats next fall as he and Perkins will continue to be teammates.

“Carter will play on the outside but he will probably jump inside,” said Pendleton.

Keyes can play inside or outside and look for Freeman, Pittman and Schreck on the outside.

to get a look there if they can be freed up from playing on the line.

The Fighting Tigers have experience and depth throughout the secondary.

Young — who had three interceptions last season — will play a safety while Wilson — who had a pick six in the season opening win over Wheelersburg — is back at one cornerback spot.

“Wilson could play some safety, but he loves playing corner. You put him on an island out there. He’s aggressive,” said Pendleton.

Besides Young, Fielder, and Perkins can all play safety. The other cornerback figures to be senior C.J. Martin (6-0, 170) who played in the secondary last season.

Schreck figures to be the punter with junior Wesley Neal, freshman David Fields or senior Evan Williams handling the placements. Another possibility is Perkins who just entered the competition.

“Bigs can boom it. He’s been a pleasant surprise. When he kicks the ball he has a different thump on it that we haven’t had here lately,” said Pendleton.

“Having a smart football player, a good athlete and one of your quarterbacks back there is not a bad situation either. It just makes us pretty dangerous to run some fakes. He makes it hard for teams to rush us which I like.”

Both Neal and Fields attend St. Joseph High School but the Flyers do not have football.

“They’re doing well,” said Pendleton. “Fields is just a freshman and he made (a field goal) from 47 yards the other day. So he has a big time leg. Wesley has a much stronger leg. He’s a second-year kid in the program and he is night and day better than last year.

“Evan Williams — our girls’ basketball player point guard, volleyball player — is a tremendous kid and leader. People don’t realize she’s a lifetime soccer player playing on travel teams. She’s come out this year and done a tremendous job. She’s hit from 45. Ty Perkins can kick the ball. The other day he was 3-for-3 from 40 yards, so he has a good leg on him.”

Fairland will be one of the favorites and Portsmouth could be the dark horse as they join Ironton as the favorites.

The Fighting Tigers won the league last season for the third straight year and the fifth time in seven seasons.

“I haven’t look into the other teams that much. I know Fairland has some good skilled guys back. I’m just trying to get us ready,” said Pendleton.