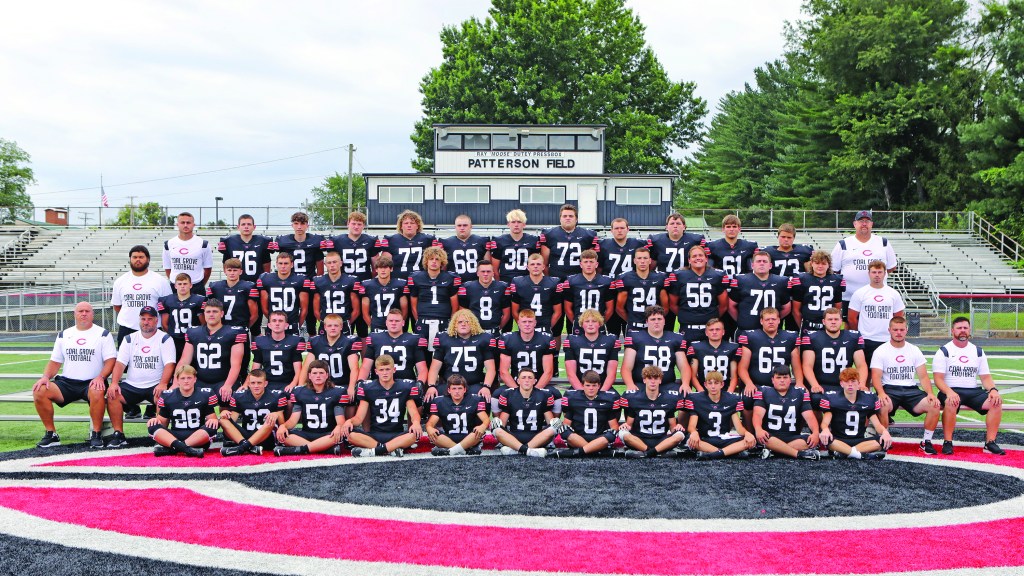 No, this isn’t a rerun of Leeza Gibbons’ famous line from the movie Poltergeist. It is describing the Coal Grove Hornets football team that returns 17 of it 22 starters from last season.

And with that many returning players, the Hornets could be a very scary challenge for opposing teams.

The Hornets return nine starters on offense and eight on defense and head coach Jay Lucas is hopeful the experience will pay big dividends.

“We feel like we have a good nucleus coming back on both sides of the ball who can really help us. As is always the case, it’s how well they mesh together as a group. Having a lot of guys returning helps with that,” said Lucas.

All positions have some talent and depth, but the running game may be atop the list thanks to the return of All-Ohio running back Chase Hall (6-2, 205) who rushed for more than 1,600 yards last season in eight regular season games.

“Chase is a special player, a special athlete. You look up and see all the success he had last year and a lot of that was at the line of scrimmage and fortunately we have a lot of them back,” said Lucas.

“Chase is a hard-working kid. He gives you everything he’s got all the time. We’re expecting big things from him. He’s a special player and there’s no secret he’s a large part of our success last year.”

Juniors Steven Simpson (5-8, 160) and Gavin Gipson (6-0, 165) shared the fullback duties last season and should do the same this year as well. Freshman Kaden Murphy (5-9, 145) will join the mix with sophomore Joe Scarberry.

“We feel like we have some pretty good weapons (in the backfield),” said Lucas. “With Steven Simpson and Gavin Gipson and Hall, all three of those guys started last year. And now we’re adding Caden Murphy who is coming in as a ninth grader and he’s a special talent as well. We feel like those four guys and Scarberry at the fullback position can all help us.”

Junior Wyatt Mannon (6-2, 180) took over the reins early last season and proved to be a valuable weapon in the offense.

“Wyatt’s a good athlete as well. He can throw the ball around,” said Lucas. “He’s weapon. He throws the ball well. He’s grown into a good leader.”

There are veterans aplenty up front where it is a key to success.

“Delawder did a really good job for us last year. Lunsford has a lot of experience and does a good job. C.J. had a fantastic spring and summer. He’s a nice athlete,” said Lucas.

“I think we do have some depth at the line of scrimmage. Having those guys returning brings the younger guys’ level of play up.”

Gone to Wilmington is Perry Kingrey along with Steve Easterling but Lucas said there are four solid candidates who will give the Hornets depth at that position as well.

“We have some depth there. Caden Turner will play some there and we’re going to look at Huff there. Devin has grown leaps and bounds in a year. He’s grown up a lot and developed,” said Lucas.

Gipson will play some wingback when he isn’t at fullback. Junior Landon Roberts should see playing time along with fellow junior Kaleb Sullivan.

Lunsford is a returning starter along with Klaiber. Pemberton, Delawder, Meadows, Yates, Bazell and Huff are all battling for playing time.

“We didn’t have to start from scratch.

Hall is back and can play inside and out but should team with Scarberry moving from defensive end to inside linebacker. Simpson is a returning starter and will be on the outside. Turner is battling for playing time. Mason Wheeler, Hankins and Runyon are all in the mix.

“Most of those guys are interchangeable,” said Lucas.

Roberts and Gipson are both returning starters and Mannon played extensively. Also in the mix will be Murphy, Bloomfield and Hankins along with newcomers Sullivan, sophomore Damian Price and freshman Leland McKnight who Lucas called the “sleeper” of the bunch.

Senior John Turner will be the placekicker and Hall will handle the punting duties.

Lucas said the conference as a whole is going to be highly competitive.

As for the Hornets, Lucas said his team could be among the contenders.

“I like the team. I like the makeup of it. We just have to hope they jell together as a unit and they’ll have success if they do that,” said Lucas. “This is a well-balanced group of kids.”