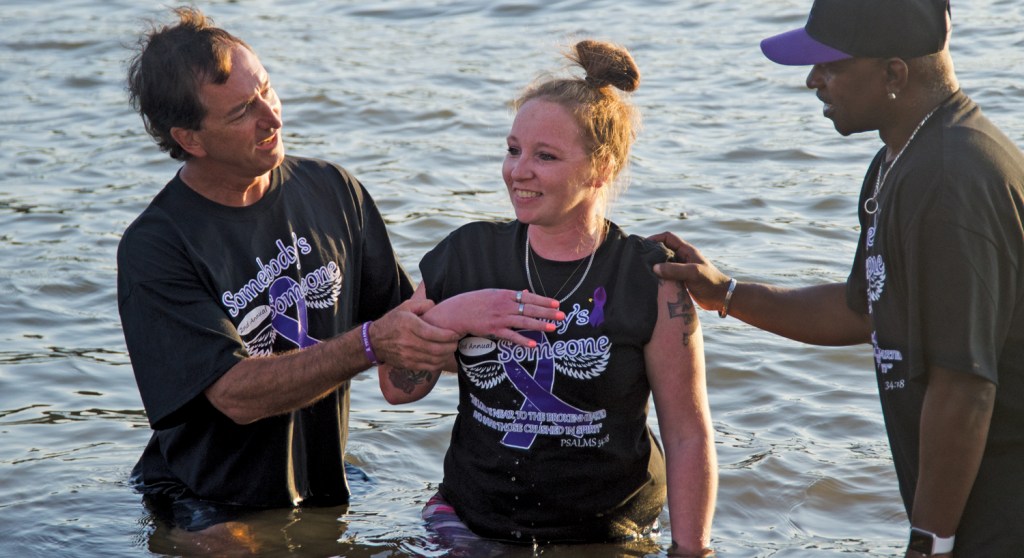 Mark Salyers, CEO and program director for Land of Goshen, left, conducts baptisms in the Ohio River, assisted by Michael Quann of Riverside Recovery Services, at the Ironton boat dock, as part of the Somebody’s Someone recovery event on Wednesday. (The Ironton Tribune | Heath Harrison) 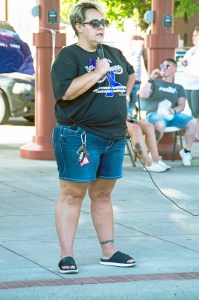 Amanda Richards, of Land of Goshen, speaks at Somebody’s Someone, a recovery event organized by the group, at the Ironton Farmers Market on Wednesday. (The Ironton Tribune | Heath Harrison)

“Like they said in ‘O Brother, Where Art Thou?,’ ‘Come on in, the water’s fine,’” Mark Salyers called to the dozens gathered at the Ohio River by Ironton’s boat dock on Wednesday.

The co-owner and CEO of Land of Goshen Treatment Center, Salyers was about to conduct the culmination of the group’s “Somebody’s Someone,” program, a spiritual portion that included the baptism of some of those attending. 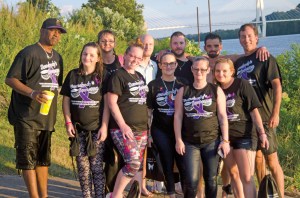 Attendees of Somebody’s Someone pose for a group photo at the Ironton boat dock after a baptismal portion of the event at the Ohio River in Ironton on Wednesday. (The Ironton Tribune | Heath Harrison)

After they entered the water, Salyers asked each person, “What has Jesus has done for you?” before baptizing them.

Altogether, nine were baptized by the event’s close.

“What a glorious day to come to the river,” Salyers said.

Named for the place in the Bible where the Hebrews resided in Egypt prior to the Exodus, the treatment center, located on Township Road 349, is a faith-based nonprofit, founded seven years ago and that offers a comprehensive program for those who are battling addiction, including treatment, wellness programs and helping those in recovery to integrate with the community.

Thursday’s event, which began at the Ironton Farmers Market, was the second annual program by the group and was held on National Overdose Awareness Day.

It featured speakers, including those telling their recovery stories, HIV tests from the county health department, Narcan availability and, as many families turned out, food and inflatables were on hand.

This year’s crowd was about double that of last year’s event, Allison Mowery, intake coordinator for Land of Goshen, said.

“It’s blown up massively,” she said of the turnout. 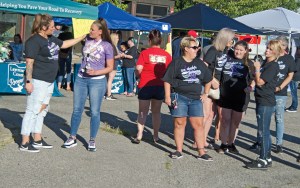 Somebody’s Someone, a recovery event organized by Land of Goshen, took place at the Ironton Farmers Market on Wednesday. (The Ironton Tribune | Heath Harrison)

Hundreds attended, with parking at the market and adjacent lots full from the turnout.

Mowery said the goal was to “get everybody together,” celebrate recovery and memorialize those lost to addiction.

On the edge of the farmers market were dozens of luminary bags, each bearing the name of someone lost to an overdose.

Other groups were set up at the event, including Lawrence County Recovery, Spectrum Outreach and Bethesda Services.

Michael Quann, from Riverside Recovery Services, was one of the speakers at the event, conducting a “Clean Time Countdown,” in which he asked those present to raise their hands for the amount of time they had been sober.

Starting with decade milestones, he counted down, next to year, then months, then days.

Each person who raised their hand was complimented and congratulated by the crowd, no matter how far into recovery they were. 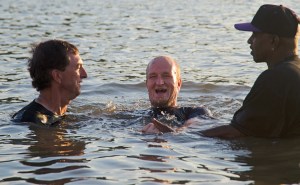 Mark Salyers, CEO and program director for Land of Goshen, left, conducts baptisms in the Ohio River, assisted by Michael Quann of Riverside Recovery Services, at the Ironton boat dock, as part of the Somebody’s Someone recovery event on Wednesday. (The Ironton Tribune | Heath Harrison)

Taylor Jones is director of operations for Bethesda Services, another faith-based recovery group, located on Fifth Street in Ironton.

“We are reaching out to the community and helping those who are struggling,” she said. 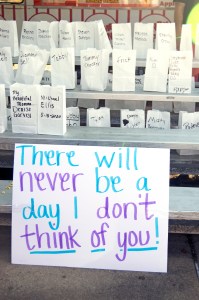 Luminaries, dedicated to those who lost their lives to addiction, ringed the Somebody’s Someone event at the Ironton Farmers market on Wednesday. (The Ironton Tribune | Heath Harrison)

She said the group’s goal is to provide a “safe environment and change lives.”

They are in their second year of operation and Jones said though they are “fairly new,” they “have a lot of longtimers.”

“We want people to know we’re offering a helping hand,” she said. “People suffering from addiction should know they are loved and worthy and we are always here.”

Jones said those seeking more information about Bethesda Services can call their intake line at 740-534-2100.

As for the event at the market, she said “It’s going great.”

“People in the recover community are really close,” she said. “We are seeing people we reached out to in a bad part of their life and they are now in recovery and working.”

In honor of the lives lost to overdose and to recognize and raise awareness for Ohio Overdose Awareness Day, Ohio Gov. Mike DeWine ordered that the flags of the United States and the State of Ohio be flown at half-staff upon all public buildings and grounds from sunrise until sunset on Thursday.

As part of this year’s observance, RecoveryOhio has announced the creation of Naloxone.Ohio.gov, a new resource that provides a simplified process for obtaining free naloxone, a life-saving drug used to reverse an opioid overdose.