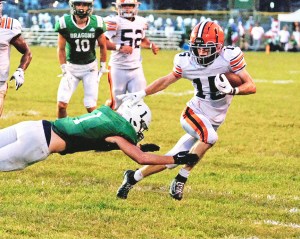 PROCTORVILLE — When Ironton packs its team equipment bag for the next game, the Fighting Tigers might want to toss in a couple of jumper cables.

After a third straight slow start offensively, Ironton finally kicked into gear and erased an early 6-0 deficit to win 34-13 on Friday in an Ohio Valley Conference game.

“Our guys were gritty. It didn’t start out pretty. I don’t know what it is about not starting out good,” said Ironton coach Trevon Pendleton. “We need to get a little more pep in out step coming out of the gate.”

Both teams came into the game 2-0 and Fairland routed Wellston 47-7 last week. The Dragons picked up where they left off as they took the opening drive of the game and went 66 yards in 6 plays to score.

Quarterback Peyton Jackson went to the air on 5 of those plays as he completed 4-of-5 for 60 yards including the final 24 yards to Brycen Hunt for the touchdown with 9:51 on the clock. The conversion run failed.

Ironton got the ball at its own 18 after the kickoff and marched to the Fairland 40-yard line only to fumble the ball away.

But two plays later, the Dragons returned the favor and Ironton recovered at its own 38.

Ironton was forced to punt and the Dragons appeared to be on the mark on their next possession, but a 38-yard pass completion to Steeler Leap ended with another Fairland fumble at the Ironton 30.

After an exchange of punts, Landen Wilson had a 30-yard return to midfield and the Ironton offense needed just 5 plays to score as Carpenter hit Ty Perkins with a 24-yard catch-and-run pass.

“You just got to get the ball to (Perkins) so he can make a lot of plays. You can do a lot of RPO stuff with him and get him the ball quick. There are times when he’s able to do things before the catch,” said Pendleton.

Fairland went 3-and-out and Wilson had a 22-yard return to the Dragons 44. Ironton went the distance in 8 plays including a 2-yard run by Keyes with exactly 2 minutes left in the half. Williams’ kick made it 14-6.

Ironton got the ball back at its own 37 and used a 25-yard pass to Wilson and a 21-yarder to Aiden Young to reach the Fairland 25, but a pass fell incomplete as the half ended.

“Our conditioning came into affect in the second half. We started leaning on people a little bit and we can be pretty successful that way, but we can’t keep getting off to these slow starts,” said Pendleton.

“Fairland is a good football team. Their athletes are as good as any team we’ve played this year if not better,: said Pendleton.

The Fighting Tigers went to work right out of the gates to begin the second half with a 65-yard, 9-play drive — all on the ground — capped by Keyes’ 11-yard scoring run and it was 21-6 with 6:50 left in the quarter.

Fairland wasn’t about to roll over and die. The Dragons answered with a 68-yard, 10-play march that featured three completions by Jackson for 41 yards and it was Jackson who ran the final 10 yards on a scramble to his right.

Gabe Polcyn kicked the conversion and it was 21-13 with 1:31 left in the quarter.

Ironton came right back after the Fairland kickoff and drove 63 yards in just 5 plays. Carpenter had an 18-yard pass for Person to start the drive and later rambled 28 yards to set up a 5-yard scoring run by Amari Felder with 11:27 to play for a 28-13 lead.

Any Fairland hopes of a comeback disappeared on first down as Wilson fought off a blocker on a quick screen and intercepted the pass at the 23 and ran it back for a touchdown and a 34-13 lead with 11:14 to go

“Football players don’t get any better than Landen Wilson. He’s a gritty, gutsy kid. He’s a leader. He’s as good as they come and he made a play right there in a time he needed to step up and make a play,” Pendleton said.

Ironton racked up 410 total yards of offense with 204 on the ground and 206 through the air.

Fairland finished with 271 total yards including 156 passing as Jackson hit 13-of-21 with a touchdown and an interception.

Ironton host the Gridiron Classic triple-header on Saturday and will play Johnson Central in the 8 p.m. game.

Fairland will play a non-league game at Trimble on Friday.