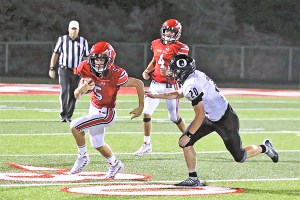 Rock Hill Redmen quarterback Brayden Adams (5) outruns Oak Hill Oaks Masen Saunders (20) to the outside as he gains 12 yards. The Redmen beat the Oaks 20-7 on Friday. (Photo By Tim Gearhart)

Renlentless means oppressively constant and not allowing people the freedom they should have. Which describes the Redmen ball-control offense.

Rock Hill ran 37 times for 210 yards and kept the Oak Hill Oaks from having the freedom to run their offense more frequently. The result was a 20-7 win over the Oaks on Friday.

“We did a good job of executing offensively for the most part and sustaining drives after the first quarter,” said Rock Hill coach Mark Lutz.

“But you have to give our defense a lot of credit. They made the plays and shut them down until late when we had the lead and let them hit some plays against our prevent.  There were a couple of plays we should have picked the ball off and they went for big yardage.”

The two plays were passes of 57 and 50 yards — the latter on the final play of the game.  Until those two plays, the Oaks only had 47 yards passing.

Oak Hill (1-2) had 216 total yards with 62 net yards rushing after lost yards rushing. Mason Saunders ran 18 times for 70 yards. Quarterback Eddie Abele was 9-of-15 for 154 yards with a touchdown and an interception.

The interception came in the first quarter when the Oaks got the ball at the Redmen 39 after a short punt.

On the third-and-12, Abele threw deep but French cut in front of the receiver, leaped into the air and came down with the football.

Oak Hill used a couple of penalties to help get the ball to the Rock Hill 15 but missed a 32-yard field goal attempt as time expired.

The second half began with Anthony Stamper returning the kickoff 50 yards to the Oaks’ 37.

Seven plays later French cutback across the grain and went 7 yards for the score. Hazley Matthews’ conversion kick made it 7-0 with 7:41 on the clock.

The Redmen forced a 3-and-out and got the ball at their own 40.

It took seven plays once again with the key play a 40-yard blast by Delong to the one-yard line. He scored on the next play and it was 13-0.

Rock Hill fumbled the ball away at midfield but the Oaks couldn’t capitalize as they managed just one net yard and had two incomplete passes.

Rock Hill took over at its own 29 and a 12-yard run by Brayden Adams got things rolling. Six plays later, Delong went the final 4 yards and Matthews’ kick pushed the lead to 20-0 with 2:32 left to play.

Oak Hill got its touchdown four plays later when Abele scrambled and threw the ball deep but behind the receiver. However, Aiden Hall was coming across the field and when the football when through a Rock Hill defensive back’s hands, he caught the ball and ran into the end zone to complete a 57-yard play.

Rock Hill ran three plays and punted and the Oaks had time for just three plays, the third a 50-yard catch and run by Al Harrison as Abele threw scrambling to avoid being sacked.