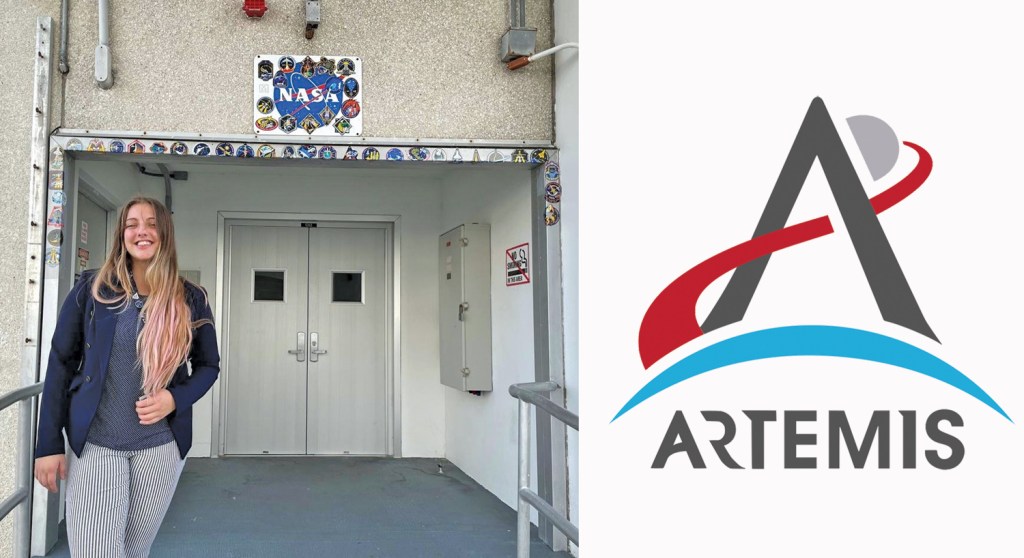 Breana Staton, a 2017 graduate of Dawson-Bryant High School who works as a ground integration engineer in systems engineering and integration for NASA, is seen in front of the “Astronaut Doors” at the Neil Armstrong Operations and Checkout Building, the last doorway crewed astronauts walk through before getting in their launch pad transportation. (Submitted photo)

NASA is gearing up for the launch of its Artemis I mission, which will take the U.S. space program and humanity back to the moon, and a Lawrence County native is among the many who have helped to make the project a reality.

Breana Staton, a 2017 graduate of Dawson-Bryant High School, works as a ground integration engineer in systems engineering and integration for the space agency.

The daughter of Crystal and Mike Staton, she said her interest in her field dates back to when she was a junior in high school and she attended the Young Women Lead conference in Ashland, Kentucky.

“They had women talking about different career tracks and doing presentations,” Staton said. 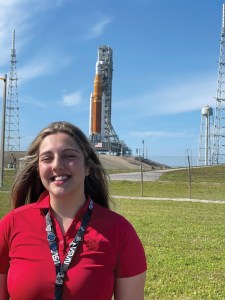 Breana Staton at NASA Kennedy Space Center’s Launch Complex 39-B, where the Space Launch System (SLS) rocket will launch from atop the Mobile Launcher. (Submitted photo)

She said there were representatives there from Morehead State University, where she would eventually attend.

“They were talking about the space systems program,” she said. “It was really cool.”

Staton, who took some Project Lead the Way STEM classes at Dawson-Bryant, as well as college credit courses, said her favorite subjects in high school were English and reading, and that she planned to major at Morehead in English education.

However, she said in her first years there, she kept hearing about the space systems program, which has been in place at the university for about two decades and decided to change her major to space systems engineering.

“I started thinking about changing my major after our open house summer of ’17, when I saw the space science building and remembered the talk from the YWL conference,” she said.

At the beginning of summer 2020, Staton said she applied for 15 internships with NASA, but didn’t hear back for several weeks.

Then, the same day NASA administrator Jim Bridenstine was visiting Morehead for a talk, Staton got an email from her future mentor, Abdiel-Santos Galindo, and landed the internship.

Her internship was slated to begin in summer 2020, just after the COVID-19 pandemic and its related shutdown hit.

“I panicked on what to do,” Staton said. “But they were able to figure out a way.”

Working remotely from Ironton, she was part of a team dedicated to the John F. Kennedy Space Center, in Merritt Island, Florida, specializing in technology, management and innovation for the Exploration Ground Systems (EGS) program, the program that stacked, tested, and now will soon launch the Space Launch System (or SLS) for the Artemis I mission.

Artemis will take place in three phases, with the first, the upcoming launch, being an uncrewed test of Artemis and the Orion capsule, sending it into lunar orbit and returning the capsule to earth. Artemis II will be a crewed mission, with tests in earth orbit, a trip around the moon and a re-entry and splashdown on earth. 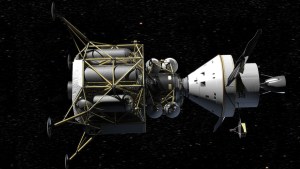 Artist’s rendering of the lunar module (left) and space capsule of the Constellation program, which will be part of the Artemis missions. (NASA illustration)

Artemis III will be a crewed landing, made possible by a team of four astronauts first docking in the Orion capsule with a Human Landing System, which will be placed in orbit around the moon by a prior support mission. From there, two of the crew will transfer to the HLS and descend to the lunar surface. The HLS will later ascend back to the Orion capsule, which will return all astronauts to earth.

Staton said the Kennedy Space Center team, which included the interns, targeted areas throughout the agency that need improvement, including capability gaps such as low-loss, high-efficiency cryogenic transfer and storage, and flame and leak detection and mitigation. She said the goal was to make things operate “More efficiently and be cheaper, while still safe and reliable.” 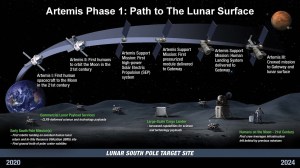 Following her internship, Staton graduated from Morehead in 2021. From there, she returned to NASA, working at Kennedy, as well as remotely, for the Artemis II mission and beyond.

She said she will get to see the upcoming Artemis I launch in person and has invited friends to come and watch.

While at Morehead, Staton said her program at the school had partnered with NASA Goddard on the Lunar IceCube satellite, one of the small CubeSats that will deploy from the Orion capsule as it nears the moon. These satellites will make observations and conduct experiments that will go toward future deep-space missions. Now, in her work at NASA, Staton is again part of the team for Artemis I.

Of the mission to return to the moon, which will be the first since the Apollo program ended a half-century ago in 1972, Staton said it is about building on the “major strides” of later decades.

“Apollo proved we could get to the moon,” she said. “Now, we can build a sustainable presence.” 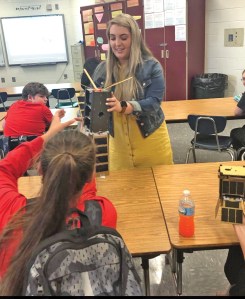 Morgan Harrison, a 2016 graduate of Dawson-Bryant schools, displays a CubeSat during a visit to Aaron Watson’s class at the district’s high school in 2018. (Submitted photo)

She said this includes plans for on-site resource utilization on the moon, with and without crew present.

“We can live and work on another world for a longer period of time,” she said, adding this would be key in an eventual mission to Mars.

In addition to Staton, another from Lawrence County is working on the Artemis missions.

Morgan Harrison is a 2016 graduate of Dawson-Bryant and also attended Morehead State as part of the space systems program. Upon graduation, she worked in Utah, then returned to Kentucky. Her work has focused primarily on safety on the mission.

Staton said her experience has led to her to tell others, “No matter your background, you are capable of pursuing whatever career path you choose.”

She said it is possible for anyone to be “engineers, artists, teachers and educators at NASA.”

“And you should not ever limit yourself, just because you come from a small town,” she said.

Artemis I was originally set to launch last weekend, but is currently delayed as teams work to replace a seal on the interface between the rocket and launcher.

A new launch date may take place in the next several weeks.