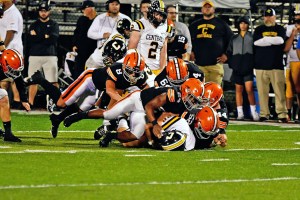 Listening to Ironton head coach Trevor Pendleton, one might have thought he was filming another Fast & Furious movie.

Pendleton wanted his Fighting Tigers not only to match the scoring of Johnson Central, but to score more and to score often.

He got what he wanted as the Fighting Tigers outscored the 4A Kentucky powerhouse 32-21 on Saturday in the final game of the Gridiron Classic at Tanks Memorial Stadium.

“You’ve got two options. You’ve got to keep the ball away from them because they wear on you and grind on you, or you’ve got to score and score in rapid succession and put points on the board. Tonight, we were kind of between those. We were able to do some good things but not score fast enough or not have drives long enough to give some guys the blow they need. They fought, they battled and they won.”

Leading the quick-strike offense was senior quarterback Tayden Carpenter who threw for 2 touchdowns and ran for 2 more. He was 11-of-16 for 234 yards and also ran 11 times for 35 yards.

“He played well. He done everything we asked of him. We’ve got to sharpen up a little bit here and there. Ultimately, a great leader and a great player,” said Pendleton.

Carpenter said the coaches talked about Johnson Central stacking the line of scrimmage to stop the run and trying to bring pressure. He said the game plan shifted from ground game first to pass.

“We made some adjustments at halftime to start throwing the ball a lot more and it just started clicking,” said Carpenter.

“All our skilled players are playmakers. I wouldn’t say there was any pressure. The one did a great job of picking up people. They were bringing stunters a lot of the time. I was just trying to get the ball out. I knew I didn’t have much time so I had to make the reads quick  (The Eagles) were a great team.”

Ironton — now 4-0 on the season — found running the ball more difficult against the big and strong defensive line of the Eagles.

The Fighting Tigers ran 33 times for 117 yards as Amari Fielder had 43 yards on 11 carries and Jaquez Keyes 37 yards on 10 rushes to go with Carpenter’s 35 yards. Ironton had 351 total yards.

The Eagles (2-2) were their usual offensive self as they ran the ball 58 times for 317 yards while only throwing the ball 3 times, twice on their final 2 plays of the game.

Fullback Chase Price ran 16 times for 155 yards and 2 touchdowns, Zack McCoart had 87 yards on 19 tries and Mason Lawson added 50 yards on 15 attempts. Quarterback Jacob Grimm was 1-of-3 passing for 17 yards to Caiden Yates.

Ironton’s first score came after the Eagles dropped the snap trying to punt and Ironton got the ball at the 8-yard line. Felder ran one and then7 yards to put the Fighting Tigers up 7-0 after Evan Williams’ kick at the 5:39 mark of the first quarter.

Johnson Central went on an 82-yard, 16-play drive in the second quarter with Price gong the final yard for the touchdown. Sawyer Crum’s conversion kick tied the game with 3:25 on the clock.

But Ironton was able to answer quickly with a 62-yard drive in 9 plays capped by Carpenter’s 1-yard run with just 17 seconds left in the half. The conversion kick was blocked and it was 13-7.

Carpenter had 3 completions in the drive including a big 37-yard pass to Ty Perkins that got the ball to the Eagles’ 25-yard line.

Perkins had 3 catches for 104 yards on the ninth.

“If you ever want to see what your team is made of, put their backs against the wall. You’re going to see fight or flight. You’ve got a room full of guys that have a lot of fight in them, so I’m happy,” said Pendleton.

Ironton took the opening kickoff of the second and needed just 6 plays to go 71 yards. Besides a 19-yard pass to Perkins, Carpenter hit Felder with a 24-yard touchdown strike and it was 20-7 with 9:59 on the third quarter clock.

“You’re going to get man coverage against them. They’re going to load the box. We have to do a little better job on the edge. But ultimately, we was able to find some mis-matches that we liked and exploit those.”

Johnson Central decided to copy Ironton’s quick-strike scoring by going 74 yards in3 plays. A 60-yard run by Price got the ball to the 10-yard line and McCoart scored on the next play and the Eagles were down 20-14 with 8:58 on the clock.

The Eagles went with another onside kickoff and recovered at their own 47. But the drive stalled at the Ironton 32 and the Fighting Tigers went in fast-forward mode by using just 7 plays to score when Carpenter hit Bailey Thacker with a 7-yard pass in the end zone.

A holding penalty on the conversion moved the ball back 10 yards and the second conversion kick attempt failed and it was 26-14 at the 3:47 mark.

The Eagles came right back with a scoring drive that began in the third quarter and ended 3 plays into the fourth quarter with Price running 4 yards for the score. Crum’s kick cut the deficit to 26-21 with 10:59 to play.

But Ironton went 64 yards in 10 plays as Carpenter went the final 3 yards for the clinching touchdowns. Williams kicked set the score at 32-21 with 6:21 to play.

Carpenter had a key 25-yard run on a third down to keep the drive alive and moved the ball to the Eagles’38. He also hit Felder with a 17-yard pass to the 8-yard line to set up the touchdown.

“They’re gritty,” Pendleton said of his team. “They find a way to win. We’re just going to try and get better and improve on it.”