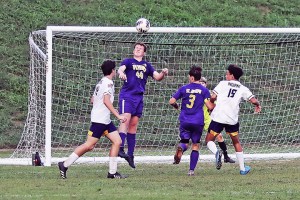 St. Joseph Flyers’ Bryson Burcham (44) uses his head to stop a Lucasville Valley shot at the goal during Thursday’s Southern Ohio Conference game. The Flyers lost a 5-4 heartbreaker to the Indians. (Photo By Tim Gearhart)

It was a tough game against a tough opponent which made for a tough loss.

The St. Joseph Flyers battled back from a 4-2 halftime deficit by outscoring Lucasville Valley 2-1 in the second half, but it wasn’t enough as they fell 5-4 in a Southern Ohio Conference soccer game.

St. Joseph’s Zachary Johnson had his hand in all of the Flyers’ scoring. He recorded a hat trick with 3 goals and he also had an assist on a goal by Landon Rowe who had 4 corner kicks in the game.

Lucasville Valley improved to 3-2-1 overall and are now 2-0 in the SOC.

Goalkeeper Evan Balestra had 16 saves as Valley had 21 shots on goal.

The Indians had 3 corner kicks, 4 fouls and 5 offsides.

The Flyers play at Rock Hill on Tuesday in a non-league game.