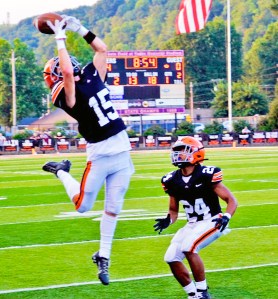 The Ironton Fighting Tigers wanted to get off to a fast start for a change, but this was ridiculous.

Ironton scored on its first 5 possessions to lead 35-0 after the first quarter en route to a 55-12 win over the South Point Pointers in an Ohio Valley Conference game on Friday.

“Our offense was in pretty good rhythm there early and was able to hit some big strike plays,” said Ironton coach Trevon Pendleton.

“We talk about explosion plays which are throws for over 15 (yards) and runs for over 10. If we get a chunk of those, we like our chances and we was able to do that early and the kids just executed when the opportunity arose.”

Quarterback Tayden Carpenter helped create some of the explosion plays. Carpenter was 4-of-5 passing for 170 yards and 4 touchdowns and also ran for another score.

“A lot of those are RPOs, situations where (Carpenter is) reading the guy and he can run it or throw and he did a heck of a job because we got some man coverage and you typically don’t like as an RPO team. But we have some man (coverage) beater RPOs in now and he done a phenomenal job with it,” said Pendleton.

The Fighting Tigers ran for 168 yards as Jaquez Keyes carried 14 times for 91 yards and a pair of touchdowns.

Ty Perkins caught 2 passes for 85 yards and 2 touchdowns. Shaun Terry had a 74-yard TD reception, Amari Felder one catch for 32 yards and a score and C.J. Martin had a 17-yard scoring play. Aris Pittman had 4 receptions for 45 yards.

The Pointers (2-3, 0-2) were led by backup quarterback Xathan Haney who hit 6-of-12 passes for 119 yards and 2 TDs. Haney was filling in for the injured Jordan Ermalovich.

South Point fumbled on the first place of the game to give Ironton the ball at the 7-yard line. Two plays later Keyes scored from the 7 and Wesley Neal hit the conversion for a 7-0 lead at the 11:08 mark.

Blaine Freeman ripped off a 28-yard run on the Pointers’ next series only to fumble the ball and Ironton recovered at its own 34.

A leaping interception by Landen Wilson gave the ball back to Ironton 2 plays later at the Pointers’ 25.

But a no gain, a 3-yard loss and a sack of Carpenter for 15 yards left Ironton facing a fourth down. Carpenter hit Perkins who made a nice catch in the end zone and it was 21-0.

Ironton forced a punt and Wilson returned the kick 27 yards to the Pointers’ 36.  On third down, Carpenter kept the ball and ran 26 yards for the score and a 28-0 lead with 4:01 left in the quarter.

A fake punt by the Pointers gave the ball to Ironton at the 29 and 2 plays later Carpenter hit Amari Felder with a swing pass and he ran 32 yards for the score and a 35-0 lead with just 10 seconds left in the first quarter.

South Point scored to start the second quarter when a blown coverage left Braydon Hanshaw wide open and Haney hit him for a 29-yard TD pass and it was 35-6.

Ironton needed just 3 plays to score again and Carpenter hit Perkins with a quick out pass and the senior wide receiver took it to the house from 52 yards away and it was 42-6 after David Fields’ conversion kick at the 9:03 mark.

After a South Point punt, Ironton drove 66 yards in 10 plays capped by Keyes’ second 7-yard TD run with 36 seconds left in the half. Keyes also had a big 25-yard run early in the drive.

With Ironton leading 49-6, the second half was played with a running clock.

Ironton went up 55-6 when Bailey Thacker hit Shaun Terry with a 74-yard catch-and-run touchdown pass with 6:38 left in the third quarter.

South Point got a touchdown on the second play of the fourth quarter when Haney hit Freeman with a nice middle screen pass that covered 30 yards for the score. The conversion kick failed and it was 55-12 with 11:02 to play.