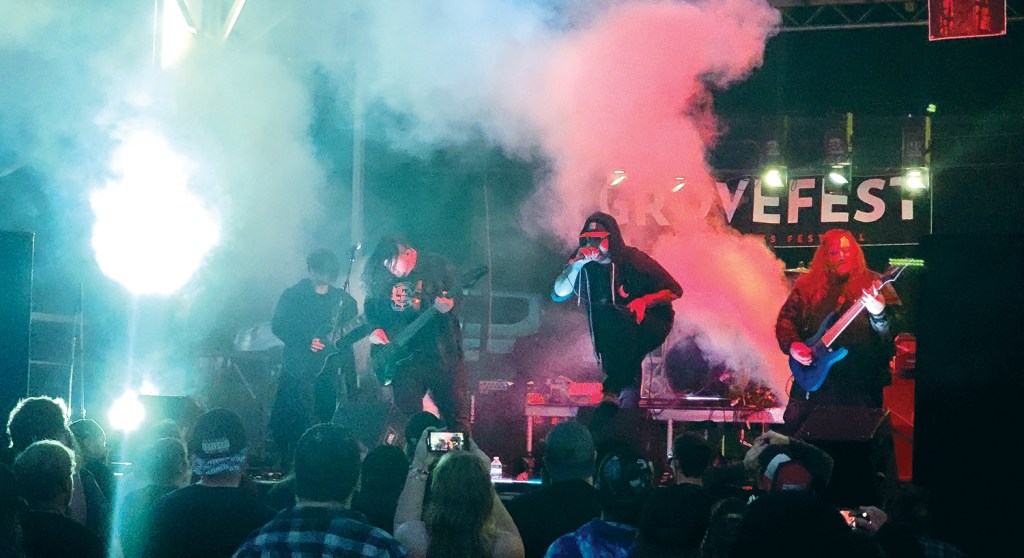 Revision, Revised on the stage of the 2021 Grovefest Music and Arts Festival in Paul Porter Park in Coal Grove. Lead singer Charlie Wilds is the founder of the festival set up the event in Coal Grove because he wanted to play in his hometown and wanted fans to have a festival like he attended back in the ‘90s. (The Ironton Tribune | Mark Shaffer)

The sound of metal returns to Paul Porter Park today for the second annual Grovefest Music and Arts Festival. Gates open at 11 a.m., music starts at noon and runs until 11 p.m.

“And we will end exactly at 11,” said Charlie Wilds, vocalist for the band Revision, Revised and creator of Grovefest. “We have to be done at 11, that’s the latest we can go.”

Wilds started the all-day series of concerts last year because he wanted to put on a music festival similar to the ones he went to in the ‘90s, like X-Fest, and he wanted his band to play in front of a hometown crowd for once. Previously, Revision, Revised has only played in Coal Grove once before.

“I just want to see the community to have events that they would never have unless I do it,” Wilds said. Earlier this year, Wilds hosted Emo Prom at the Ro-Na Theater, which was a dance set as if it was the early 2000s. “What we are trying to do is break even and keep doing it and keep growing it each year. I know it will take four to six years before it is really, really known around the area and expected each year.”

In addition to Revision, Revised, the bands include headliners I Set My Friends on Fire, Scarlett O’Hara, Aphasia, The Difference Between, Avanti, Ghostatic, Echobreak, Parked, Beyond Veils, Kings Hollow, Solemnly Swear, Duly, Pacific Skyline, Portrait of Betrayal, Let Them Divide and Something Wicked and returning artists I, The Oracle, Fear The Dreamer and Valley of Dismay.

“We don’t want to recycle a lot each year so it isn’t the same bands every year,” he said. After they get all the bands’
information, they “have a meeting and we all vote on who would fit best on the bill, based on the headliner.”

Wilds called I Set My Friends on Fire a very unique band.

“They had a truck that ran in the NASCAR series with their designs on it not too long ago,” he said. “And the truck was pretty crazy looking.”

The truck, driven by Brad Perez, is a white Chevy Silverado with logos in pink and black. It also has a
cartoon narwhale.

Wilds wants to assure everyone in the area that, just because it’s a metal festival, there’s nothing to fear.

“If you are around it, it is just a community that wants to play and be treated like a
country artist or bluegrass artist would be,” he said. “We just play different a
different kind of music.”