Path to the murals 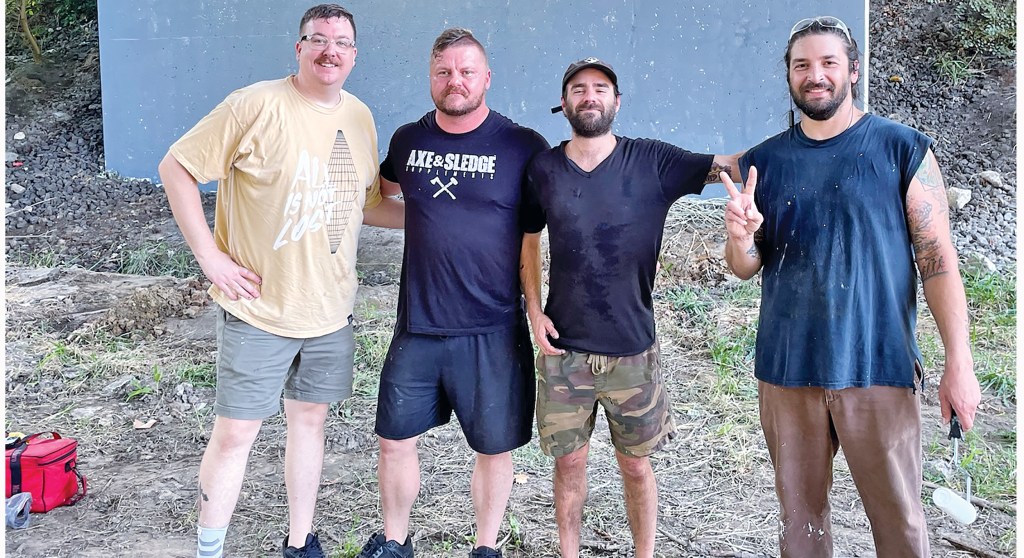 Four of the artists that helped paint several murals along the Moulton’s Field bike and walking route this weekend were, from left, Craig Bischoff, Jeff Bailey, Ryan Taylor and Kris Hillen. (Photo Submitted)

Over the weekend, a group of volunteers created new murals to brighten up the path for Saturday’s 5K Ironton River Run.

The Third and Center group, which puts on the run, put out a call for volunteers to help put new murals on the pathway next to Moulton’s Field in the north end of Ironton. 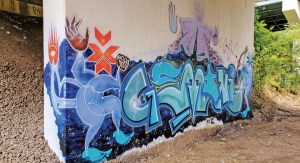 ABOVE: Three of the murals painted along the pathway by Moulton’s Field in the north end of Ironton by visiting artists helping out Third and Center beautify the area before the Saturday’s 5K Ironton River Run (The Ironton Tribune | Mark Shaffer)

By Monday morning, five murals, on the concrete vertical support pieces that hold up a U.S. 52 bridge and a utility building and more were being painted.

Amanda Cleary, a member of Third and Center, said they wanted to help liven up the rather dreary space along the 5K run’s new path.

“We wanted to make some modifications to last year’s course. This year, the course will go all the way around Moulton’s Field,” she said. “But when we ran the course to map it out, this space here was in really bad shape.”

She said there was a lot of trash, there were overgrown trees and weeds and, on the walls, there was a lot of unpleasant graffiti that was “vulgar, derogatory and hate-filled.” So a call was sent out on Facebook for artists to help beautify the area.

“The feedback was phenomenal,” Cleary said. Three artists, Craig Bischoff of MOTOPHOTO & Portrait Studio, Jeff Bailey of Get Beyond and Ryan Taylor, of Sweet Tea Studio, who came from Louisville, Kentucky and brought along an artist friend Kris Hillen, from Huntington, West Virginia.

“Jeff Bailey is native to Ashland, Kentucky, and he saw the post and recruited his friends to help,” Cleary said. “They came in on Saturday and gave us these four beautiful graffiti murals.”

There were also local artists such as Brittany Maynard, of South Point, Colleen Walker, of Huntington, W.Va. and formerly of Ironton, and Kaylin Triplett, of Ironton, that came down to paint as well.

“All of these artists donated their time and talents to give back to the city and help make our city shine,” Cleary said. “We are so grateful. As an arts-based organization, Third and Center likes to put an emphasis on paying artists, but this wasn’t a planned project for us. All these artists were so kind to donate their time and travel to make this part of our city look more aesthetically pleasing.”

Cleary said that the Ironton Street Department’s supervisor Mike Pemberton and his crew along with recreation director Brett Thomas and his team, came over to clean up the trash and scrape the dirt off the pathway.

“They did a fantastic job,” Cleary said. “It looks so much better here.”

The Ironton River Run starts at 6 p.m. Saturday at the Rotary Fountain at Third and Center streets.