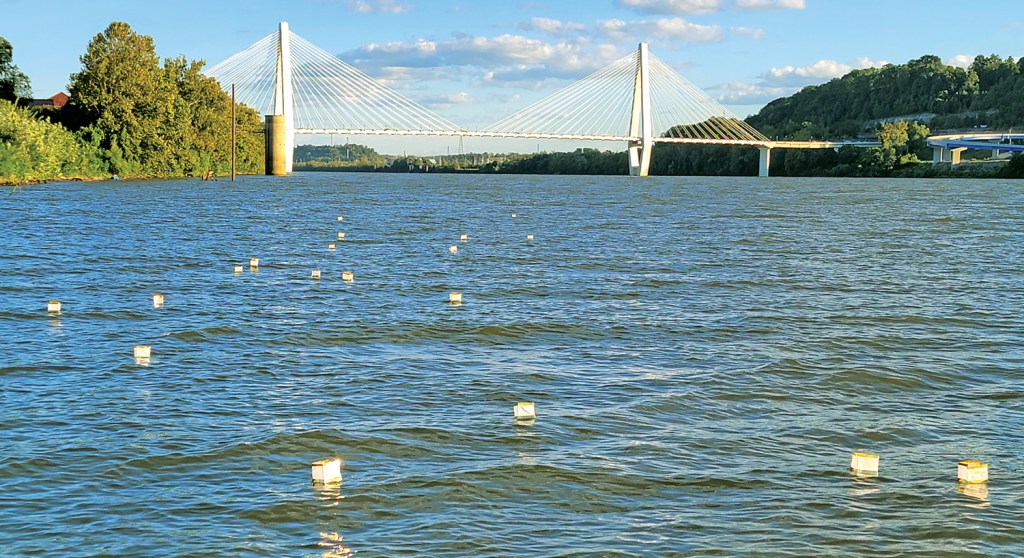 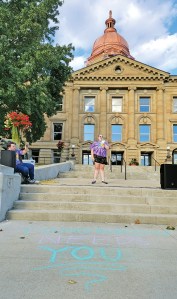 Veronica Poyner speaks on the steps of the Lawrence County Courthouse during Impact Prevention’s anti-suicide walk on Thursday. (The Tribune|Mark Shaffer) 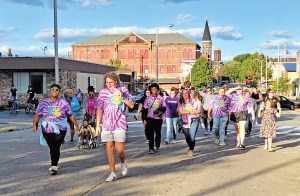 On Thursday, those who have lost loved ones to suicide walked to bring a message of support to the community.

The event was put on by Impact Prevention, a local nonprofit.

It started at the Lawrence County Courthouse, where messages of “Be happy” and “Tomorrow needs you” where chalked onto the sidewalks and retaining wall.

Meagan Joseph, the program manager for Impact Prevention, said this is the third year that they have held the walk.

“We are coming out in a show of community,” she said. “Our Southern Ohio Youth Council put this all together. We are really proud of the effort they put into this in bringing awareness to suicide and mental health. It is such an important issue in our community.”

The event was held to also honor September as Suicide Awareness Month.

“This is the kind of event we need in our community to raise awareness and end the stigma, to let people know that it is okay to not feel okay,” Joseph said. “And that there is help out there.”

Gavin Simpson is a freshman at St. Joseph High School and just recently became a member of the Southern Ohio Youth Council.

“I really enjoy the work that they do,” he said. “I think it really provides a good message. It is important to go out into the community so that people are aware these things are happening and we can help solve it.”

Veronica Poynor, a junior at Tri-State STEM+M Early College High School and a member of the Southern Ohio Youth Council, stood on the steps of the courthouse to speak to the assembled crowd.

“We are here to shine a light,” she said. “We want to remind people that there is hope.”

She said she knew what it was like to feel alone in a roomful of people.

After Poynor’s speech, the crowd made its way down Center Street to the Ohio River.

Once there, luminaries where lit. People said who the luminary was in honor of and some spoke of what they remembered about that person.

Then the luminaries were gently placed into the river and the choppy current sailed them towards the Oakley C. Collins Bridge.

The booths had information available for the services they provide.

Impact Prevention also unveiled a new brightly painted mural that repeated the messages of “Tomorrow needs you” and “You belong.” It also has the 988 suicide and crisis lifeline logo on it.