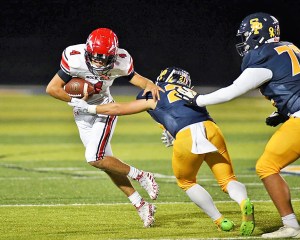 Rock Hill Redmen running back Kordell French (4) tries to elude a tackle by South Point Pointers’ Blaine Freeman (21) during Friday’s game. French ran for 244 yards and a touchdown in a 21-7 win. (Robert Stevens of The Gold Studio in Ironton)

SOUTH POINT — Kordell French might only be 5-foot-8, but he just keeps coming up big.

The Rock Hill senior made big plays running the ball and on defense as the Redmen downed the South Point Pointers 21-7 in an Ohio Valley Conference game on Friday.

On offense, French had one of the best rushing games in the program’s history as he ran 14 times for 244 yards and a touchdown.

On defense, the Pointers completed a long pass for 44 yards but French stole the ball from the receiver at the 2-yard line to thwart a possible touchdown. He also had an interception.

The Pointers ran for 135 yards as Blaine Freeman carried 18 times for 83 yards and a touchdown.

Thanks to a 22-yard kickoff return, the Pointers had the ball at the Rock Hill 48 to start the game.

The drive reached the 15-yard line but a fourth down pass to Freeman was sniffed out by Wyatt “Earp” Jenkins for only a 2-yard gain.

South Point began a drive that reached the Rock Hill 40, but French came up with a big interception and the Redmen at the ball at their own 27 early in the second quarter.

French quickly put the Redmen in scoring position one first down as he got loose on a 64-yard run to the Pointers’ 9-yard line. Skyler Kidd scored from 1-yard out just 3 plays later and Hazley Matthews’ kick made it 7-0.

“When defenses stack the line of scrimmage and you get a hat on everyone, you can break the plain and it’s off to the races. We were able to do that a few times,” said Lutz.

After a South Point punt, the Redmen got a first down at midfield and French ran the ball to the 2-yard line and set up a scoring run by Kidd on the next play and it was 14-0 at the half.

Both teams got on the scoreboard in the third quarter starting with the Redmen.

Stamper’s 37-yard kickoff return to begin the half put the ball at the Pointers’ 43. French ran 18 yards for a touchdown 7 plays into the drive and Matthews’ kick extended the lead to 21-0.

South Point came right back 77-yard, 10-play drive that saw Ermalovich complete 5-of-6 passes for 45 yards. But it was Freeman who ran 12 and then 7 yards with the second carry going for the touchdown.

Braylon Balandra kicked the conversion and the Pointers cut the deficit to 21-7.

Rock Hill threatened twice in the fourth quarter but failed to capitalize.

A 48-yard run by Stamper got the ball to the Pointers’ 16 only to have the defense stiffen.

South Point answered with a drive to the Rock Hill 35, but on a fourth-and-long Braydon Hanshaw was looking to pass on a flea flicker and had to run. He gained 21 yards but was well short of the first down.

Rock Hill used a 34-yard run by French to get to the Pointers 23, but again the drive stalled.

However, less than a minute remained and the Pointers could only manage 4 yards and a fourth down pass went incomplete as the game ended.