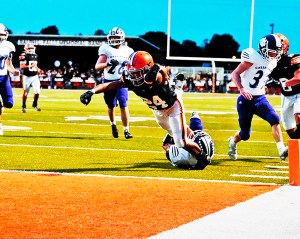 Ironton Fighting Tigers’ Zayne Williams (24) dives into the end zone for his first career touchdown during a 62-0 win over the Chesapeake Panthers on Friday. (Jeremy Holtzapfel/HoltzPhoto.com)

If you score 62 points, you would think the talk would be about the offense.

But the Ironton Fighting Tigers’ defense told the bigger story on Friday as they blanked the Chesapeake Panthers 62-0 in an Ohio Valley Conference game.

Ironton limited the Panthers to just 6 net yards of offense and no first downs in a dominating performance.

“That’s a testament to our defense and to coach Jarred Pendleton and the defensive staff and the way those guys approach things,” said Ironton coach Trevon Pendleton.

“(Chesapeake’s) Todd Knipp is a great football coach and does a great job. They’re well-coached and there are a lot of things they do well. On film, you see them move the ball.”

Ranked number one in this week’s Associated Press poll, Ironton (6-0, 3-0) got their offense going early. The Fighting Tigers scored all their points in the first half with quick scoring drives of 4, 4, 2, 3, one, one and 3 plays. The other touchdown was a punt return.

“We executed the game plan we put forth to them and they played hard,” said Pendleton. “We working to get better every day. Our kids are taking that in stride and they understand what we’re trying to accomplish and they’re working toward that goal every single day.”

Ironton recovered an onside kickoff to start the game and Keyes scored from 5 yards out 4 plays into the drive. Evan Williams kicked the conversion for a 7-0 lead.

Ironton got the ball back at the Panthers 46 and 4 plays later Amari Fielder scored from 23 yards out and it was 14-0.

The next drive was just 2 plays are Tayden Carpenter hit Shaun Terry for 18 yards and Keyes ran 37 yards on the next play to make it 21-0.

Another 3-and-out by the Panthers gave Ironton the ball at the 48 and 3 plays later Carpenter hit Zayne Williams with a 23-yard catch and run for his first career touchdown and a 28-0 lead.

Ironton got the ball at midfield early in the second quarter and a personal foul penalty moved the ball to the Panthers’ 35. Carpenter teamed up with Aiden Young on a TD pass play and Wesley Neal’s conversion kick made it 35-0 with 10:43 left in the half.

The next score was almost as quick as Felder ran 51 yards on the first play following a punt and David Fields’ conversion kick pushed the lead to 42-0.

Keyes had a 7-yard scoring run to cap a 17-yard, 3-play drive thanks to a fumble recovery by Cole Freeman and it was 48-0.

Ironton needed just one play for its next score as Copas raced 48 yards for a touchdown and it was 55-0 with 3:55 left in the half.

The Panthers had another 3-and-out but this time Shaun Terry returned the punt 44 yards for a touchdown and Ty Perkins’ conversion kick capped the scoring with just 38 seconds left in the half.

Landen Wilson also had a punt return for a touchdown in the first quarter only to be called back due to a penalty.

Ironton had 481 yards of total offense with 364 on the ground and Carpenter hitting all 8 of his passes for 117 yards and 2 touchdowns.

Felder ran just twice for 74 yards and 2 scores, Keyes had 6 carries for 72 yards and 3 TDs, Copas had the one carry for 48 yards and a score while Tyler Carmon came off the bench to get 78 yards on 9 attempts.