Trojans hold on to edge Hornets 43-42 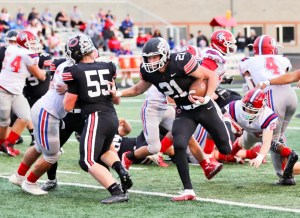 Coal Grove Hornets’ Chase Hall (21) follows the block of Elias Bazell (55) as he picks up some yardage during Friday’s game against the Portsmouth Trojans. Hall scored 6 touchdowns including a kickoff return but the Hornets lost a 43-42 thriller. (Photo By Tim Gearhart)

COAL GROVE —  Football has always been described best as a game of inches.

Well, it wasn’t exactly inches here, but the outcome of this game was decided by two yards.

A goal line stand on a two-point conversion try by the Trojans would be the difference as Portsmouth would win 43-42 hand the Coal Grove Hornets their first loss of the 2022 season.

Coal Grove opened up the scoring as they took the opening kickoff and used a vintage Hornet drive, going 80 yards in 10 plays.

Senior running back Chase Hall would sprint into the end zone from 9 yards away for the score.

Fullback Steven Simpson would run in for the two-point conversion and the Hornets would lead 8-0.

Hall would find the end zone 6 times on the night as he rushed 33 times for 279 yards.

The Trojans would respond with a score of their own as quarterback Tyler Duncan would lead his team down the field completing all 5 of his passing attempts on the drive.

His fifth pass of the drive was to a wide open Jayden Duncan for a 15-yard touchdown toss.

Kicker Zach Roth booted the extra point and the score was 8-7 in favor of the Hornets with 4:20 left in the first quarter.

The Hornets next drive would result in a turnover as Trojan defensive back Beau Hammond would make a leaping interception of a Whyatt Mannon pass at the Portsmouth 49 and return the ball to the Hornet 9-yard line.

A targeting penalty on a first down play would back Portsmouth up to the Coal Grove 23.

Roth’s extra point would extend the Trojan lead to 14-8 with 1:47 left in the opening frame.

The Hornets would commit their second turnover of the night on their following possession as Mannon would drop back to pass on a 2nd-and-10 only to be hit as he was throwing the ball.

The hit caused the ball to fall into the waiting arms of Trojan defense tackle Leo Poxes to give the ball back to Portsmouth at midfield early in the second quarter.

Portsmouth (3-3, 2-1) would capitalize on the turnover quickly as they would move 62 yards in just five plays with the drive ending with a Hammond 1-yard run to put the Trojans up 21-8

The score was set up by a 42-yard pitch and catch from Duncan to Duncan, as Jayden Duncan caught a pass in front of the Portsmouth bench, shook off a tackler and raced down the sideline to the Hornet 14 before he was dragged out of bounds.

Hall would swing the momentum back in his teams favor on the following kickoff as he would field the kick at his own 15 and take it the distance to put the Hornets back within 7.

Hall would then add the two-point conversion to make the score 21-16.

Portsmouth would tally the final score of the first half on another Duncan-to-Duncan connection on 3rd-and-27 as Tyler Duncan would roll out to his left and throw up a jump ball for Jayden Duncan, who would come up with the ball in the end zone to make the score 28-16 in favor of the Trojans.

Portsmouth took the opening drive of the third quarter and methodically drove down to the Hornet 9, but that’s when things broke down for them.

The Trojans would commit a costly penalty to back themselves up to the 26 and end up turning it over on downs, giving the ball back to the Hornets on their own 11.

During the drive, Hall ripped off a 37-yard run to put the Hornets at the Trojan 49.

The third quarter was the Chase Hall show as 12 of Hall’s 33 carries and 110 of his 279 rushing yards came in the quarter.

The Hornet defense would again halt the Trojan offense forcing a 3-and-out, giving Coal Grove the ball back with 2:47 left in the third and plenty of momentum at this point.

The Hornets proceeded to drive 74-yards in 6 plays to take their first lead since being up 8-0 in the first quarter.

The touchdown score came on the very first play of the 4th quarter when Hall ran in from 22 yards out. The Hornets would lead 30-28 with 11:54 remaining in the game.

Portsmouth finally end their scoring drought as Brenden Truett got into the end zone on a 6-yard run to put the Trojans back ahead 36-30 with 8:57 left.

Coal Grove would just need three plays to answer as Hall would sprint 33-yards past the Portsmouth defense to tie the game.

However, the Trojans would stop Hall on the two-point try to keep the score 36-36.

Portsmouth moved down the field quickly thanks to a huge gain on a Duncan pass to Nolan Heilland in front of the Trojan bench.

Heilland took off down the sideline before being taken down at the 6 by Hall.

Tyler Duncan then threw his fourth touchdown pass of the night as he connected with Jayden Duncan for third time on the night on a 5-yard pass to take the lead.

Coal Grove would respond as Simpson would take a sweep 34 yards down to the Trojan 3.

On the very next play, Hall punched it in for this fifth rushing touchdown to make the score 43-42.

As they had all night, the Hornets would go for two to take the lead and they put the ball in the hands of Hall.

But this time the Portsmouth defensive front was there to meet Hall and take him down 2 yards shy of the goal line, leaving the score at 43-42 with 2:48 remaining in the game.

Despite recovering the onside kick, Portsmouth failed to run the clock out and had to punt.

Coal Grove would get the ball back on their own 14 with 46 remaining.

The Hornets were aided with a Portsmouth pass interference call which moved the ball to their own 40.

On the final play, Mannon dropped back to throw up a Hail Mary only to be sacked by Portsmouth defensive end T.J. Debord to seal the win for the Trojans.