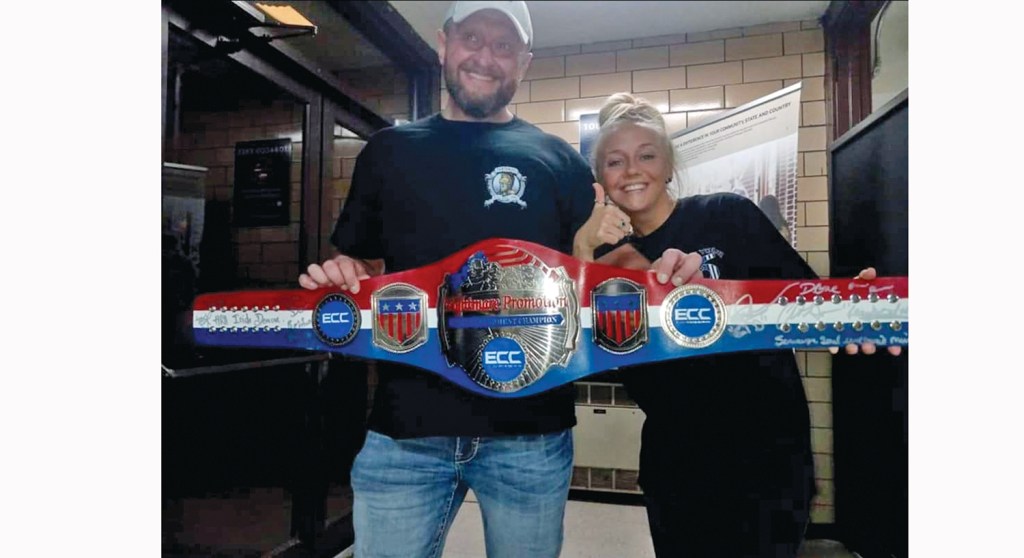 Ironton Police Sgt. Chad Gue and his wife, Destiney, hold Gue’s championship belt he won by default after his opponent didn’t show up for a charity fight on Saturday. Still, the match raised an estimated $20,000 for St. Jude’s Children’s Research Hospital from the auctioning of the belt and from people in the YouTube community. (Submitted photo)

ASHLAND, Ky. — Saturday came and went and YouTuber Chille DeCastro, as promised, did not show up for a cage match between him and Ironton Police officer Sgt. Chad Gue. But that didn’t stop YouTubers from raising thousands of dollars for St. Jude’s Children’s Research Hospital.

The long-scheduled event was set to take place in the Ashland Armory, but no one expected DeCastro to show. He had posted a video that he couldn’t fight because a pre-fight medical examination showed a bad knee and high blood pressure.

“I did not pass my physical,” DeCastro said in a video posted to his channel, Delete Lawz. “My blood pressure was 179 and my left knee is pretty banged-up. I’ve been keeping it a secret because you don’t want your opponent to know what part of your body is injured.”

Gue, who spent the last part of summer recovering from a bad knee, decided to continue on and do what the fight was for… to raise money for St. Jude’s hospital.

Since Gue won by default, he had decided to auction off the belt and give the money to St. Jude.

Gue, who also has a channel on YouTube as Leaducator, had several of his fellow YouTubers in attendance including Irish Demon, who held a fundraiser on his channel before the event and raised an additional $1,000 from his followers.

That wasn’t all the money raised for the children’s hospital.

Gue estimated that from various YouTube channels fundraising for St. Jude, “It’s probably over $20,000 total. We did a fundraiser in July that raised several thousands of dollars. Plothole did one just the other day and I think he raised $4,000 in one stream. It’s been pretty crazy.”

Gue said the main thing was everyone coming together to help a good cause.

Besides the fundraising aspect, Gue enjoyed meeting up with several YouTubers who came in for the fight, even though they all knew it was unlikely that there would be an actual cage fight.

“We had a good time,” he said. “We had Irish Demon, Bridge the Divide, Bits and Pieces, Ironton Auditor and there were several guys I didn’t even know about their channels before this. I think this was one of the biggest YouTube events, we had so many people come together and do something awesome.

So, I want to thank the YouTube community and Nightmare Productions who was willing to do all this for a wonderful charity.”

And the belt will be making its way to Massachusetts. The woman that won the championship belt gave it back to Gue. Per the suggestions of the YouTube community, it will make its way to Kate Peter, who runs the Troll Mafia Official YouTube channel.

Peter has been highly critical of DeCastro and in return, DeCastro has taken Peter to court twice.

In July, DeCastro filed to get a restraining order against Peter after she went to a Memorial Day Parade in the Boston area because DeCastro was live broadcasting on his channel.

Another YouTuber filmed DeCastro bumping into Peter and then him screaming at her to get away from him.

The judge didn’t issue a restraining order and dismissed the issue.

Peter was in court last week with DeCastro claiming that Peter was again harassing him, despite the fact that he was in Denver and Peter was in Massachusetts.

DeCastro was again denied a protection order by a judge.