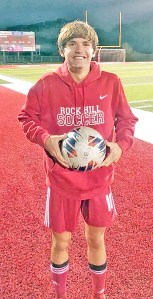 PEDRO — Sam I am, and I am the career leader.

Rock Hill senior Sam Simpson had a haul as he scored 4 goals which enabled him to set the all-time soccer scoring record as the Redmen beat the Portsmouth Trojans 9-0 in an Ohio Valley Conference game on Tuesday.

The record goal was a family affair as Sam scored off a corner kick from his brother Ben while assistant coach and dad Adam Simpson looked on.

Jaxon Rose and Dawson Lewis each scored a goal with Lewis getting 3 assists. Connor Blagg had an assist.

Rose scored off an assist by Adams to give Rock Hill the only goal they would need at the 20:13 mark of the first half.

Simpson then scored with an assist from Blagg at the 22:17 mark and then scored an unassisted goal with 28:36 on the clock.

Adams scored the next 2 goals for the Redmen with Dawson getting the assist each time and it was 5-0 at the half.

After Simpson got his milestone goal, Lewis used an assist from Sam Simpson to score with 57:10 on the clock.

Simpson scored again about 5 minutes later and Adams used an assist from Lewis to score at 66:57 and set the final score.

On Monday, the Redmen fell behind 1-0 but then scored 6 unanswered goals en route to a 6-2 non-league win over the New Boston Tigers on Monday.

Rhys Bratchett’s unassisted goal with 6:48 on the first quarter block gave the Tigers up 1-0.

Rock Hill took over from that moment and scored 6 straight goals.

Sam Simpson teamed up to score with Connor Blagg getting the assist and the game was tied at the 17:07 mark.

Adams scored off an assist from Sam Simpson and the Redmen had the lead for good with 26:5 on the clock.

Sam Simpson found the back of the net again with an assist from Adams at it was 5-1 at the half.

The Redmen went up 6-1 with 62:20 on the clock before Preston Jackson had an unassisted goal for New Boston.

Rock Hill moves to 7-6-1 on the season and 4-3-1 in the OVC. The Redmen will host Chesapeake on Thursday.