Blue Devils hold on to edge Hornets in OVC showdown 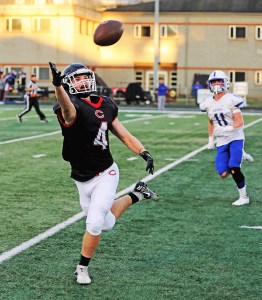 Coal Grove Hornets’ Wesley Runyon (4) reaches out to grab one of his two receptions during Friday’s OVC game against the Gallipolis Blue Devils. The Hornets came up just short for the second straight week as they fell 36-33. (Photo By Tim Gearhart)

COAL GROVE  — It was very much a war Friday night and Coal Grove won the battles.

However, despite wining the battles, the Hornets unfortunately lost the war on Friday night as the Gallipolis Blue Devils remained undefeated with a 36-33 win.

Coal Grove held the advantage in total yards in both rushing and passing, first downs, time of possession, and penalties. The Hornets even managed to force Gallipolis to be the only team to punt.

But in the end, the Blue Devils (7-0, 4-0) were able to slip by and remain in the hunt for the top spot in the Ohio Valley Conference.

The Hornets would get on the board first with an opening drive that covered 79-yards.

The key play on the drive was not on ground, but through the air.

On a first down play, tight end Wes Runyon made a spectacular one-handed catch on a pass by Whyatt Mannon to gain 23 yards and put the Hornets deep in Blue Devils territory.

The Coal Grove score would come just two plays later as Chase Hall would rip through the Gallipolis’ defense for a 12-yard touchdown run.

Hall would cross the goal line again on the two-point conversion and the Hornets would lead 8-0 with 8:38 in the opening quarter.

The Blue Devils would respond quickly as Joey Dambrough would field the ensuing kickoff and streak down the sideline, but not until being dragged down by Kaden Murphy at the 1-yard line.

On the following play running back Hudson Shamblin score his first touchdown of the night for the to make the score 8-6.

Shamblin would be stopped shy of the end zone on the conversion try by Hall to keep the Hornets ahead.

Coal Grove would extend their lead in the second quarter on a 3-yard touchdown plunge by Hall. The two-point try failed and the Hornets lead 14-6 midway though the second period.

Gallipolils’ offense would begin the click on the following possession as Shamblin would rip off a 29-yard run on the first play of the drive to the Hornet 36.

Shamblin finished the night with 162 yards on 23 carries and three touchdowns to lead the Gallipolis offensive attack.

The Blue Devils would score minutes later as Shamblin finished the drive with a 2-yard run to cut the Hornet lead to 14-12.

The Blue Devils attempted to steal a possession from the Hornets with a surprise onside kick. However, the ball did not go the 10-yards needed to recover it, so the Hornets were set up with prime field position at the Gallipolis 49-yard line.

The Hornets would take advantage and drive in for the go-ahead touchdown with just 26 seconds remaining in the half.

The scoring play came via the air as Mannon found Runyon for a 11-yard touchdown pass to cap off an 11-play drive.

Senior kicker John Turner converted the extra point to give the Hornets a 21-14 lead heading into the half.

Gallipolis got the ball to start the second half and began a 66-yard drive that would result in a 2-yard touchdown run by Shamblin.

Caleb Stout would convert the extra point try and the Blue Devils would tie the game up at 21-21 with 10:10 in the third period.

Coal Grove (5-2, 2-2) would retake the lead as Hall broke through the first level of defenders and raced 47 yards into the end zone to make the score 27-21 with 47 seconds remaining in the third quarter.

Hall finished the game with 214 yards on 36 carries with 3 touchdowns.

Franklin fielded the ensuing kickoff and cut through the Hornet defenders with a 56-yard return to set up the Blue Devils next offensive possession at the 21-yard line.

Gallipolis only needed 5 plays to answer with their own touchdown as Fellure lobbed up a jump ball to Franklin from 9 yards out for the score.

Stout would covert the extra point kick and Gallipolis would lead 28-27 early in the final period.

The Hornets answered in rapid fashion as Mannon hit Runyon again on a long pass covering 34 yards to set up shop at the Blue Devil 40-yard line.

On the very next play, fullback Steven Simpson broke free from the pack and sprinted 40 yards for the touchdown.

Hall was stopped inches from the goal line on the two-point try but Coal Grove still led 33-28 with 10:26 in the game.

The Blue Devils would again answer with a score of their own. This time Fellure called his own number and found his way into the end zone from 3 yards out to give Gallipolis a 34-33 lead.

Fellure hit fullback Cole Hines on the two-point conversion to make the score 36-33 with 8:38 remaining.

On their next possession, the Hornets faced a 4th-and-5 on their own 37-yard line with 5:30 left on the clock.

Coal Grove decided to roll the dice and go for it and gave the ball to Hall who was stopped 2-yards shy of the first down marker to give the ball back to the Blue Devils.

The Hornets were unable to get the ball back as the Gallipolis’ offense managed to run the remaining time off the clock and secure the win.