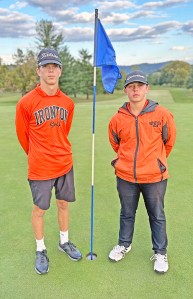 PORTSMOUTH — It was one-out-of-5 and 4-out-of-5 for local golfers at the Class AA sectional tournament.

One team — the Fairland Dragons — and four individuals took all but one of the qualifying spots in next week’s district tournament.

Gallipolis won the sectional title with a team score of 313 with the Dragons second at 322.

The Wheelersburg Pirates were third at 336 followed by the Piketon Red Streaks at 339 and Waverly with a 341 total.

Kerns won on the fifth hole of a playoff as he sank a 25-foot putt to earn his trip to the district.

The district tournament will be Wednesday, Oct. 5, at the Crown Hill Golf Club in Williamsport.

Fairland was led by senior Landon Roberts who shot a 79 on rounds of 42 and 37.

Laith Hamid of Gallipolis took medalist honors with a 70 on rounds of 37 and 33.

The Chesapeake Panthers had a sixth place finish at 375 while the Ironton Fighting Tigers were just 2 strokes behind at 377.

The Panthers were led by sophomore Jacob Skeens who fired an 85 on rounds of 46 and 39.