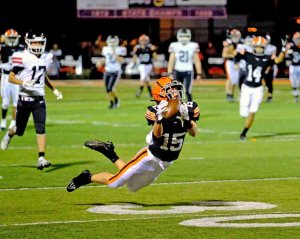 Ironton Fighting Tigers’ Landen Wilson (15) makes a diving catch to set up a touchdown during a 55-6 win over the Coal Grove Hornerts on Friday. (Jeremy Holtzapfel of HoltzPhoto.com) 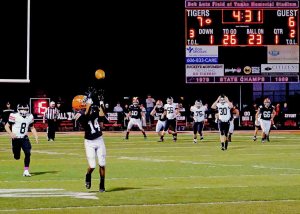 Ironton Fighting Tigers’ wide receiver Shaun Terry (14) makes an over-the-shoulder catch and then completes the 76-yard scoring play in an OVC game against the Coal Grove Hornets on Friday. (Jeremy Holtzapfel of HoltzPhoto.com) 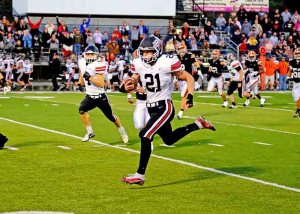 Coal Grove Hornets’ running back Chase Hall (21) races toward the end zone for a touchdown during Friday’s OVC game against the Ironton Fighting Tigers. (Jeremy Holtzapfel of HoltzPhoto.com)

Ironton fell behind quickly to start the game, but quickly scored to take the lead and had 5 scoring possessions of 4 plays or less as they beat the Coal Grove Hornets 55-6 in an Ohio Valley Conference game on Friday.

One player who exemplified a quick worker was Ironton’s Shaun Terry who caught 5 passes for 144 yards and 2 touchdowns and also returned a kickoff for a score.

“Shaun Terry is a great athlete. He’s grown into an all-around football player. We expect big things from him going forward,” said Ironton coach Trevon Pendleton whose team is now 8-0 overall and 5-0 in the OVC.

Coal Grove (5-3, 2-3) turned to its workhorse again as running back Chase Hall broke free and raced 65 yards on the second play of the game to give the Hornets a 6-0 lead.

Hall finished the game with 153 yards on 24 carries but only managed 12 yards on 7 carries in the second half as the Ironton defense zeroed in on the senior standout who came into the game with almost 1,700 yards rushing and had scored 30 touchdowns.

“He’s a great football player. He’s big, strong, fast. The kid’s got a bright future. We told our kids going in that we’ve got to rally to the football, get 11 hats on him and get him to the ground,” said Pendleton. “He’s very good at what he does.”

But as quickly as the Hornets took the lead, Ironton was even quicker getting it back as Terry returned the kickoff 85 yards for a touchdown.

Evan Williams kicked the conversion to put Ironton up for good at 7-6 just 15 seconds after the Hornets’ score.

Coal Grove started a drive but stalled at the 48 and got off a short 18-yard punt.

Two plays later, quarterback Tayden Carpenter threw to Terry who made an over-the-shoulder catch on a 76-yard scoring play and it was 14-6 with 4;25 on the clock.

Ironton drove to the Hornets’ 9-yard line only to fumble and Kaleb Sullivan recovered at the 5-yard line for the Hornets.

Another drive got to the 48 but Hall was stopped for a 5-yard loss on fourth down by Cole Freeman when a bad snap on the punt forced Hall to run and Ironton took over at the Coal Grove 43.

On the ensuing play, Terry took a pop pass in the backfield and weaved his way through the Hornets’ defense before getting a key block from Landen Wilson that enabled him to get into the end zone and Ironton lead 20-6 with 6:47 left in the half.

Coal Grove went three-and-out but Hall got off a 54-yard punt that put Ironton at the 11-yard line.

But the Fighting Tigers covered 89 yards in 7 plays with Keyes running 13 yards for the score. Carpenter passed to Braden Schreck for the conversion and it was 34-6 with 4:54 on the clock.

Ironton began a drive at its own 39 that spilled over into the fourth quarter where Felder ran 20 yards for a touchdown on a fourth-and-2 play. Williams kick made it 41-6 with 11:46 to go.

Ironton’s next possession took 2 plays to score as Carpenter hit Wilson who made a diving catch for a 32-yard gain and then threw a pass to Ty Perkins in the flats that he turned into a 29-yard scoring play. Wesley Neal’s conversion kicked made it 48-6 with 5:11 left.

A blocked punt gave Ironton the ball at the 17 yard-line. Schreck — now playing quarterback — ran for 5 yards and then hit Wilson on a 12-yard catch-and-run play for the touchdown. David Fields’ conversion kick made it 55-6.

Ironton had 497 total yards with Carpenter going 12-of-23 for 320 yards and 3 touchdowns. The running game added 165 yards with Felder running 9 times for 99 yards and Keyes carried 8 times for 47 yards and two scores.