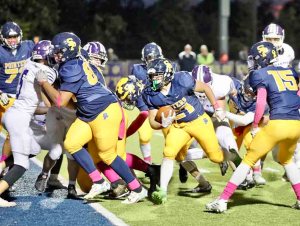 SOUTH POINT — Football is known as a team sport. Well, when it comes to winning football games, it takes a team effort.

And total team effort is exactly what the South Point Pointers used as they blanked the Chesapeake Panthers 31-0 on Friday night at Alumni Stadium.

The offense was highlighted by Jordan Ermalovich, who completed 12 of 27 passes for 156 yards, ran for 43 yards and threw three touchdown passes on the night.

The defense would finish the night holding the Chesapeake offense to just 117 total yards and with only 25 of that coming in the second half.

After forcing the Panthers to punt in their opening drive, South Point manufactured a 10-play, 61-yard drive to open up the scoring on the evening.

Quarterback Jordan Ermalovich would complete three of four passes on the drive, with his third completion being to running back Gage Chapman, who would catch a dump pass and race 29-yards into the end zone to put the Pointers ahead 6-0 with 5:30 remaining in the opening quarter.

Chesapeake would manage to move the ball to midfield, but their drive would be halted as a Jacob Harris pass would be intercepted by Xathan Haney to end the Panthers drive.

On the very next play the Pointers would fumble the ball away back to the Panthers and a second chance at answering with a score of their own.

However, the Pointer defense would shut down any hopes that Chesapeake had and force a three-and-out, getting the ball back on their own 29-yard line after a Curtis Brandenburg punt.

South Point would take advantage of several penalties by the Panthers and a 25-yard run by Ermalovich to drive the ball to the Chesapeake 3-yard line to end the first quarter.

Blaine Freeman would score on the very first play of the second quarter as he would negotiate the final 3 yards for his first score of the night.

Ermalovich would hit Braydon Hanshaw in the back of the end zone for the two points and make the score 14-0.

The Panthers would continue to struggle offensively as the South Point defense would refuse to let their offense get going and forced another punt.

After another Panther punt, the South Point offense would be set up with great starting position after Eli Wilburn would return the punt to the Panther 36-yard line.

The Pointers would take advantage of the field position and score in just three plays, as Ermolovich would toss his second touchdown pass of the night. This time to his other running back Blaine Freeman, who would catch a dump pass and head down the sideline for 31 yards on the play.

Freeman would finish the night with 51 yards on the ground and 29 yards receiving to go along with his two scores on the evening.

Braylon Balandra would come on to convert the extra point try and give South Point a 21-0 lead with 2:49 left in the half.

Balandra would get into the act again right before halftime as he would boot a 20-yard field goal as time expired to end the first half and extend the Pointers lead to 24-0.

The Pointers would round out the scoring on the evening with a 12-play, 64-yard drive, that would result in another Ermalovich touchdown pass to Hanshaw from 21-yards out to put the final touches on a 31-0 win for the Pointers.

The win marks the first time the Pointers have posted back-to-back wins in the series since the 2007-2008 seasons.