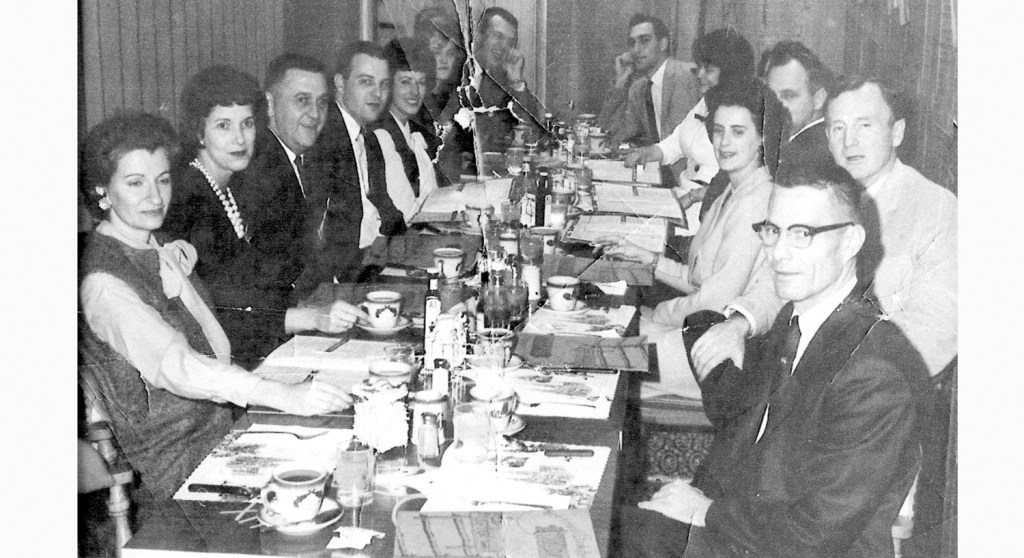 WIRO: The heart of the community — Part II

EDITOR”S NOTE – This is the second in a four-part series, which will run each Saturday through October. To view the previous installment, click here.

Ken Auble loved and trusted his announcers. He had an ear for talent and an intuition for potential.

Both were major talents on the air as well. Ken could be stern — he expected his rules to be kept — but he gave so many of us our first chance in the Radio Biz. And even a second chance. 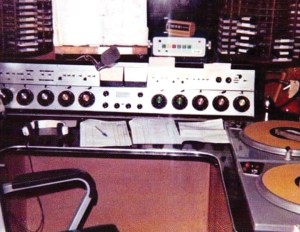 A Gates console at WIRO studios, with turntables seen at right. Ken Auble acquired the console for the station from WCOL in Columbus.

Meet some of the Boys of the Big I:

• Noah Don Adams, an Ashland native, responded to a newspaper ad for a job at WIRO in 1962. He was among the first to be hired by Ken Auble. It was his first job in radio. As a fledgling DJ, Noah found himself working a double shift. On the air from 9 a.m.–noon, he played the bright “good music” of the times as Sam Smith, a name bequeathed by Mr. Auble. Then, from 9 p.m.–midnight, hosting The Sandman Serenade, he played rock and roll, taking the requests and making the dedications that packed the program each night. The wildly popular show always began with its theme — the Chordettes’s 1954 hit, “Mr. Sandman” (Bill Trowbridge, the original “Sandman,” was followed by Joe Bowman, and Noah took the coveted air chair after Joe.).

Noah continued playing the hits beyond the confines of the Big I studio at afternoon junior high sock-hops, as well as counting down the hot hits of the week over the public address system at a local drive-in movie theatre making him, he remembers, “a rock and roll hero” to his fans. “WIRO,” he reports, “was never anything but a good time!”

Eventually, Noah Adams found a home on a public radio station in Lexington, Kentucky playing progressive rock and bluegrass before moving to National Public Radio in Washington D.C. as a writer and editor. In 1978, beginning on the weekend edition, Noah became the long-time co-host of one of NRP’s flagship programs, “All Things Considered.” He still fields reporting assignments for NPR.

• Mike “Todd” Tussey also began his broadcast career — 61 years and counting — at WIRO. “You’re on the Air” is the title of his radio memoir. As a teller at an Ashland bank, Mike looked up one day to see Big I personality Hal Murphy at his window.

Hal suggested he might have a future in radio. But Mike’s bank job frowned on moonlighting, so he needed an on-air name to cover his tracks. Johnny Dollar helped him out. They came up with “Mike Todd,” it was strong, easy to remember and one-syllable perfect. Trained by Noah Adams, Mike worked weekends over WIRO’s airwaves for a year before moving on. He returned to 1230 Radio as a full-time DJ from 1964–1967.

Starting on the mid-day shift, he was soon called upon to replace the departing Johnny Dollar as Hal Murphy’s “sideman” during the station’s morning drive-time’s The Coffee Grounds Show and the afternoon drive-time’s The Town Clowns program. The hilarity-packed shows became staples of the WIRO listening day.

Curiously, Mike and Hal never worked in the same studio. Hal broadcast from remote locations in Ashland including the Ventura Hotel and, later, Blue Ribbon Lanes at the foot of the Ashland Bridge. Both of these studios had large picture windows at street level, so Hal Murphy was seen live on the radio!

Mike Todd also partnered with Ken Jones in calling Ironton Fighting Tiger games. Mike, says, “Ken taught me everything I needed to know!” Ken Jones, for whom the Ironton High School football press box would be named, was the radio station’s long-time sports director. He died in the Marshall University plane crash in 1970.

One of Mike’s favorite remembrances: Ken bet him five dollars he could hit a golf ball over the U.S. 52 interchange and bounce it straight down Ironton’s Park Avenue. He lined up his shot in the station’s small yard and…Mike had to pay up!

After his WIRO years, even as an Ashland police officer, Mike kept a hand in local radio.

Today, Mike Tussey, a 2010 inductee into the West Virginia Broadcasting Hall of Fame, calls college Division I play-by-play for ESPN+. Perhaps, though, Mike’s greatest claim to fame is the naming by an Ironton drive-in eatery of a sandwich in his honor: The Todd Burger.

• Ronnie Bell began his life on the air as the mid-morning DJ on Big I radio. When Mike Todd left, he took over as co-host with Hal Murphy on the popular morning and the afternoon drive-time programs for five and a half years. He also eased into the sales manager spot following Hal Murphy’s tenure in the position. Altogether, Ron worked at the Big I stations for 23 years. But there’s a back story. Hal Murphy began airing a 15-minute gospel music program, The Singing Convention. 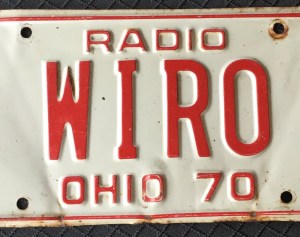 A WIRO license plate that was on the front of Ken Auble’s car. (Submitted photo)

He had only a few records, so he played the same ones over and over. Ron liked the program but knew it could be better. As he watched Hal approach his cash register at his Kroger’s grocery job in Ashland, Ron determined to say something. After hearing Hal’s explanation for the tired record repetition, Ron suggested if he couldn’t do a better job he should quit. Hal paused…then asked for suggestions. Ronnie, an avid gospel music lover, said he had dozens of gospel albums from which to choose and would glad to bring them in. Hal said three albums would be enough. It worked, and it opened the door for Ken Auble to ask Ronnie Bell to join the WIRO family.

Ronnie brought his LP’s to work, and the Saturday morning Gospel Singing Convention soon expanded to three hours from 9 a.m. until noon. The program remained sold-out with eager sponsors waiting in the wings until the Big I stations changed hands. A taped evening edition, Gospel Music with Ronnie, also had a long run.

After the Aubles retired, Ron took his joy of playing gospel music—and presumably his record cache—to other local stations, and the Singing Convention remained popular for another 29 years.

• Bob Miller, a homegrown Irontonian, began his 45-plus years in radio in September 1970, as a weekend warrior at the little radio station on the hill. For his audition, Ken Auble directed him to read stories straight out of the local newspaper, The Ironton Tribune. He did OK. Bob got the job. (I was happy to put in a good word.)

Self-effacing, perhaps, Bob says Ken hired him not for his talent but for his voice. A classic radio voice — resonant and vibrant, to be sure — but with a phenomenal talent that could not be contained.

In time, he moved on and up. He says he was blessed to learn cutting-edge radio as the protégé of WIRO alumnus Jim Schnieder, “The Flying Dutchman.” Working together at other local stations over the years, Jim tutored Bob through his expert, hands-on technical and programming direction. (The “Dutchman,” himself, as a junior high student, was the Big I radio protégé of Mike Tussey.)

At one point, Bob Miller — like many of us — was gifted by Ken Auble’s consummate grace and personal regard, and welcomed back to our home station, WIRO, for a second chapter.

As did many WIRO announcers, Bob put on his radio station blazer with the big WIRO logo on a breast pocket, packed all the necessary equipment and served as point man in City Hall for the live evening airings of Ironton City Council meetings. During the summer the windows were kept open because the place wasn’t air conditioned. Bob recalls the slow rumble of the DT&I engine that seemed always to roll past on Railroad Street during the council sessions. And blow its loud whistle through those open windows adding a touch of drama, or perhaps humor, to the proceedings. (The Detroit, Toledo and Ironton Railroad is, alas, a fallen-flag.)

Bob Miller was named the 1974 National Air Personality of the Year/Small Market when he was the morning DJ —“Miller in the Morning”— at WGNT Radio in Huntington.

He’s also a member of the prestigious West Virginia Broadcasting Hall of Fame. Although retired, he’s still in demand for commercial voice work.

And these days, he warmly welcomes his passengers as a rider-favorite conductor for the Astoria (Oregon) Riverfront Trolley.

NEXT WEEK: Our series continues next time with more memories from the Big I’s DJ “family,” and we’ll explore WIRO’s longtime love affair with the Ironton High School Tigers.

— Gordon Hall is a former DJ, broadcast journalist and communications instructor. He began his 30-year radio career at WIRO in 1969.

(Submitted for publication by Gordon Hall. Copyright on work reserved by the author.)