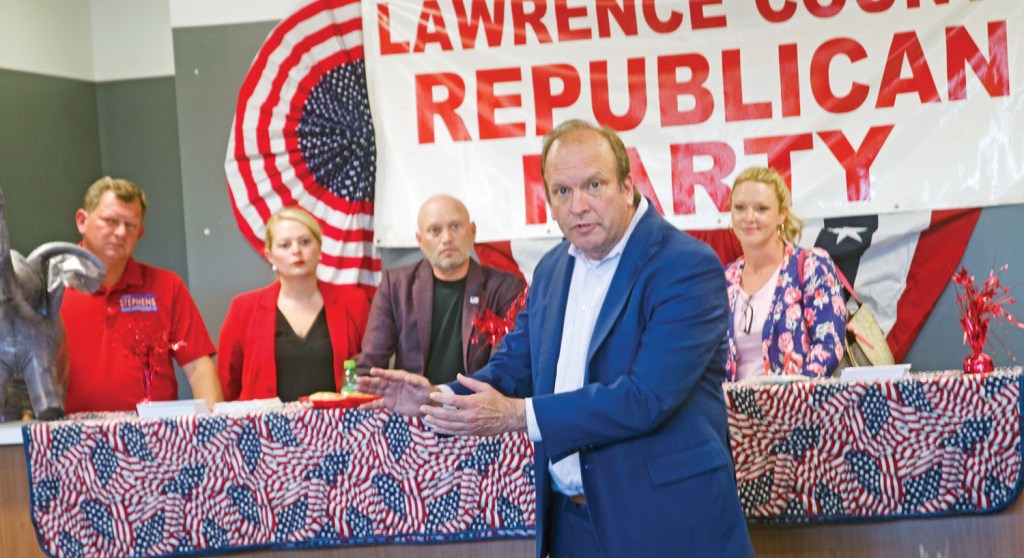 Ohio Supreme Court Justice pat DeWine speaks at the opening of the Lawrence County Republican Party campaign headquarters in Ironton on Thursday. DeWine is seeking re-election to a second term on the court. (The Ironton Tribune | Heath Harrison)

Ohio Supreme Court Justice Pat DeWine is wrapping up his first term on the high bench and, in seeking re-election, the Republican candidate said judicial philosophy is the key issue in the race.

DeWine was in Ironton on Thursday, visiting the opening of the Lawrence County Republican party headquarters, as one of several stops in southern Ohio that day.

He said it was not his first visit to the county.

“I’ve been here a number of times and have spoken at the high school,” he said.

Prior to the event, DeWine visited The Ironton Tribune, where he made his case for re-election.

“I think it comes down to judicial philosophy,” he said. “I’m someone who believes that the role of the Supreme Court is to apply the law as written to create an environment in the state where people want to invest and do business, but also to protect the safety of the public.”

DeWine described his views as those of a “constitutional conservative.”

“I believe judges have a limited role,” he said. “We are to say what the law is, but not to make the law. We call balls and strike within existing rules. We don’t say what rules should be. I think you do that by applying the text of the law and applying the law as written. One of the dangers of people who say they believe in a living constitution is that the constitution becomes whatever the judge wants it to be. The rules change depending on who the judge is and not everyone gets treated the same under the law. Whereas if you stick to the text, you ensure everyone gets treated equally applying same rules.”

DeWine, the son of Ohio Gov. Mike DeWine, has been on the court since 2017 and has a career in politics of more than two decades, beginning on the Cincinnati City Council and the Hamilton County Commission.

Prior to serving on the Supreme Court, he served as a Hamilton County Common Pleas Judge, followed by time on the Ohio Court of Appeals First District.

He faces Marilyn Zayas, a Democrat and current judge on that Court of Appeals, in the Supreme Court race this year.

“One thing that I bring is I have been a judge at all three levels of government,” DeWine said. “I have been a trial court judge, presided over criminal trials and know what happens in courtroom. I’ve also been on Court of Appeals and now the Supreme Court. I’m the only one in this race, between the two of us, who has that experience.”

In his interview, DeWine repeatedly referred to the Dubose vs. McGuffey case, in which the Ohio Supreme Court upheld a $1 million bail reduction in a murder case.

That case was decided by a 4-3 majority with Republican Chief Justice Maureen O’Connor joining with the court’s three Democratic justice, while DeWine and two other Republicans dissented.

DeWine called the ruling an “earth-shattering change in criminal law.”

“I think the real dividing issue is how people think about public safety,” he said. “The majority on the court in the court in January issued a very controversial decision which held that local judges, when they set bail for violent criminals, are not allowed to even consider the safety of the public in setting the amount of bail. That’s led to a lot of controversy. My opponent has said she supports that opinion. I certainly do not.”

DeWine pointed to the dissent he wrote in the case, stating it was “wrongly decided.”

“The majority ignored the text and, in my view, legislated from the bench and imposed their own policy views on what the law should be, rather than what law actually said. It’s led to so much public outcry that the legislature put Issue 1 on the ballot, which will essentially repeal what the Ohio Supreme Court decided in the DuBose case and allow judges in Ohio to do what they always done until January of this year, which is consider public safety when they set amount of bail.”

DeWine said he feels things are going well with the campaign as the election nears.

“We’re getting all over the state, talking to voters and have a lot of support in Ohio,” he said. “I think the contrast is my opponent — her donors come from largely outside Ohio. If you look the last few reports, 90 percent who’ve given money to her have been from outside Ohio. So you ask, ‘If she’s relying on people California and New York to fund her campaign, what is her agenda?”

Three seats on the Ohio Supreme Court are on the ballot in November, including the chief justice position.
— The Tribune welcomes interviews with all statewide candidates.