Will be archived, added to museum collection

A flag of one of history’s most insidious regimes, captured by an American soldier, will now be among the artifacts contained by a military museum in Ironton. 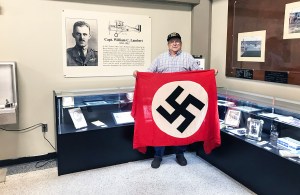 “It’s in mint condition,” said Joe Unger, with the museum, adding that the flag will now be taken to an archivist and preserved in storage as part of the museum’s collection. Displays from the collection rotate from a larger collection of artifacts.

Unger said the museum, which is named for Ironton native and World War I flying ace Lambert and includes artifacts from all U.S. military conflicts, is always accepting donations.

He said those making a donation receive a form, which can be used when filing taxes.

Tagg explained how the flag came into his possession.

“In 1971. I was assigned to the 1978th Communications Group at Albrook Air Force Station, Panama Canal Zone,” he said in a statement. “The summer of 1974, my son played T-Ball and two young Airmen, John and Herb (last names unknown) coached his team. John and Herb both lived in the single airman’s dormitory.”

Tagg said on weekends and holidays, he and his wife, Elinor, would invite the two to their home for a cookout “to get them out of the dormitory and enjoy a family dinner.”

“On one occasion when they came to visit John brought a Nazi flag,” Tagg said. “John said that he felt uneasy about having a Nazi flag in the dormitory and asked if I would like to have it. He was afraid that someone would report him for having it and that he did not want to get into trouble. We just put it away in a dresser drawer and basically forgot about it.

John explained that his grandfather (name unknown) was in World War II and he took the Nazi Flag from a captured German tank.”

Tagg said that, recently, when he was working out at the Fairborn YMCA, a friend told him that he had visited the Lambert Museum and was impressed with it.

“I said to him that I probably had something that they would be interested in,” Tagg said. “He asked what it was. I explained to him that I had a Nazi flag and how I came about having it. I stopped by the museum and talked to the curator and he was really interested in getting it.” Tagg, a native of Lawrence County, said he was curious about the museum and contacted them himself.

He spoke with Unger, who said they were interested in receiving it for a display on World War II.

Tagg delivered the flag in person, which he said “belongs in a military museum and not stashed away, sight unseen, in a dresser drawer.”

“I am confident that the flag has found a good home and will be used in Lawrence County for history purposes,” he said.