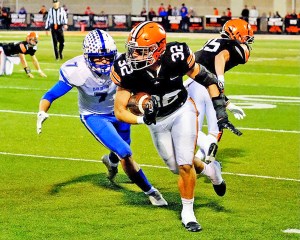 Ironton Fighting Tigers’ tight end Lincoln Barnes (32) hauls in a pass for a first down in the first quarter of Friday’s game against the Gallipolis Blue Devils. Ironton got a late touchdown to win 29-22. (Jeremy Holtzapfel/HoltzPhoto.com)

Things were ugly for the Ironton Fighting Tigers, but they found a couple pretty plays down the stretch that gave them a 29-22 win over the Gallipolis Blue Devils on Friday to clinch at least a share of the Ohio Valley Conference title.

“The kids fought with resiliency. It didn’t go pretty and we didn’t coach a very clean game, so we have a lot to clean up. But our kids fought,” said Ironton coach Trevon Pendleton.

“We preach all the time that football games come down to three or four big plays and we were able to capitalize on those.”

The big ugly for Ironton was 14 penalties for 129 yards to go with the two lost fumbles.

“We’ve got to do a lot of good things in practice and make sure that doesn’t happen again,” said Pendleton.

With the game tied, Ironton went 72 yards in 10 plays sparked by the running of Landen Wilson and Jaquez Keyes.

Backup quarterback Braden Schreck replaced starter Tayden Carpenter for one play and ran 19 yards to ignite the drive. Keyes went 21 and 8 yards and Wilson had an 18-yard jaunted to the 6-yard line.

Keyes scored 3 plays later on a 3-yard run and Evan Williams kick put the Fighting Tigers up 29-22 with 3:03 to play.

But a 15-yard unsportsmanlike penalty forced Ironton to kick-off from the 25-yard line and the squib kick was covered by Gallipolis at the Ironton 40.

Ironton forced an incomplete pass on fourth down but a pass interference on the play gave Gallipolis the ball at the 15 with 36 seconds left.

The Blue Devils were again faced with a fourth down but quarterback Brody Fellure was pressured and threw the ball away for an intentional grounding to end the drive and Ironton took a knee on the next play to end the game.

Ironton took the opening kickoff and marched 77 yards in 11 plays with Carpenter hitting Wilson with a 23-yard touchdown pass on a fourth and 10 play.

Gallipolis was forced to punt but Cole Hines was forced to run under a heavy Ironton rush and flipped a pass to Gunner Peterson as he was being tackled and the play covered 13 yards but was well short of the first down.

Ironton then drove 57 yards in 8 plays with Carpenter going the final yard for the score. Carpenter passed to Lincoln Barnes on the conversion and the lead was 15-0 with 11:23 on the clock.

After forcing another punt, Ironton went 62 yards in 9 plays with a 40-yard pass to Bailey Thacker the key play to Gallipolis 18. Keyes ran 2 yards for the touchdown and Williams’ kick made it 22-0 with 6:48 left in the half.

Mason Skidmore returned the kickoff 47 yards to the Ironton 36 to set up a Gallipolis score.

With the aid of a facemask penalty, the Blue Devils were able to cover the distance in 7 plays capped by Hudson Shamblin’s 2-yard run. Shamblin ran 6 ties for 23 yards on the drive.

Stout kicked the conversion and the Blue Devils cut the deficit to 22-7 with 1:28 left in the second quarter.

Ironton needs a win at second-place Portsmouth next Friday to win the league title outright for the fourth straight season and sixth in seven years.

“We’re going to celebrate this one for 24 hours and then it’s off to the next week. We have clean things up and find a way to get better.”