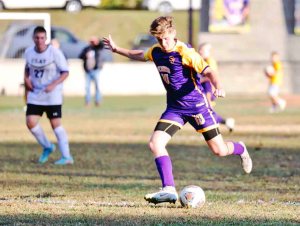 St. Joseph Flyers senior soccer standout Zachary Johnson had a goal in mind and he thought he had a chance to achieve it. Little did he know but he already had the goal in hand. 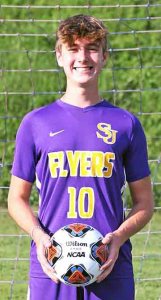 “We knew about it in the beginning, but I didn’t know I broke it for a little bit and then my parents told me. It’s pretty cool,” said Johnson said Johnson after learning he had become the Flyers’ all-time leading scorer of the boys’ soccer program.

“It’s pretty awesome having the record (at St. Joseph). I was kind of hoping to get it my freshman year. I was thinking I had a chance to get it, but I didn’t know I was actually going to get it.”

“My freshman and sophomore year, I’d say we were the best team in the area. My freshman year I didn’t have that many goals. My sophomore year we had three players in the top ten of the state in goals scoring. I think that’s pretty awesome. We had Jackson (Rowe) and Bryce Balestra. That was pretty crazy.”

Veteran Flyers’ coach Mike Balestra said it was no surprise to him that Johnson would one day get the scoring record based on what he had seen in the past.

“He’s probably one of the most dedicated soccer players I’ve coached in years His brother (Jared) was about the same. He’s played since he was four years old,” said Flyers coach Mike Balestra.

“I’ve watched him play on travel teams and he’s always been a very dedicated player. The best thing about him is he’s a great student. He has a great personality, he treats everybody the same and he takes responsibility for the team and leads them on the field.”

As a freshman, Johnson scored the winning goal in the district semifinals to beat North Adams who was the No. 1 seed. In his sophomore year, he scored the only goal of the game when the Flyers beat Lucasville Valley to win the Southern Ohio Conference championship.

“He’s been there for us. Even though he’s played with some good players, it’s always been a team effort for him. You just look at his stats and he probably has half as many assists as he has goals,” said Balestra.

Johnson is the target of the opposition and he said he’s learned how to deal with the extra attention he receives.

“It kind of happened last year with Elijah (Rowe) and myself. I wasn’t used to it at the beginning of this year. I let my anger get to me and said a few things I shouldn’t have and it got me kicked out of a game. Now, I’m more aware it and I’m used to it so it’s not bad,” said Johnson.

The Flyers are 12-4-1 on the season and sitting second in the SOC. Johnson said it’s been a team effort all season.

“We have a pretty tight group just like last year. This year we’re doing pretty good so far. We’ve done better than people thought we would,” said Johnson. “We hope we can get to the district finals this year but it’ll be tough.”

If the Flyers do make it to the district, Balestra knows Johnson will be a key to achieving that goal because he wants that goal for his team.

And as far as the Flyers are concerned, they want Johnson’s scoring to continue to grow because it will make both him and the team better.