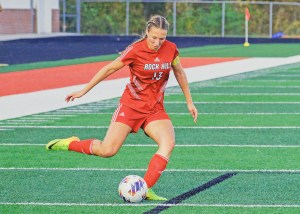 Rock Hill Redwomen’s Bri Reynolds gets ready to pass the ball against South Point Lady Pointers during an Ohio Valley Conference soccer game on Tuesday. Reynolds scored 2 goals and became the Southeast District girls’ soccer all-time leading scorer as she helped lead the Redwomen to a 8-0 in and their fourth straight OVC championship. (Jeremy Holtzapfel/HoltzPhoto.com)

Boy, how many times have you heard that over the past four years? How about a 136 times.

The Rock Hill Redwomen senior soccer standout scored 2 goals and had 4 assists in an 8-0 win over the South Point Lady Pointers on Tuesday to clinch a fourth straight Ohio Valley Conference championship.

But with those two goals, Reynolds not only helped the Redwomen win the league title but she became the Southeast Ohio all-time leading scorer with 136 goals to lead the 67 schools in the district.

Besides her scoring record — she had 42 goals this season — Reynolds also has 28 assists this season to give her 79 for her career.

And she’s accomplished all of this despite having surgery in February to repair a dislocated PMFL and torn articular cartilage which had her chance of even playing this season in limbo.

Reynolds said she hasn’t taken time to think about the records but figures when this season ends and the dust settles, she can appreciate what she has accomplished.

“I’ll just sit back and reflect on what they really do mean. I don’t like thinking of it as ‘wow.’ I can’t really fathom that I’m the number goal scorer in the district. I can’t wrap my head around that,” said Reynolds.

“I didn’t think about those when I was starting out. My 100 goals after my freshman year that was kind of my goal. I made that my goal. That’s the one I’ve known the longest. The OVC, I figured I’d get that just because we beat the second team in the OVC 8-0 and that’s just kind of how its been so I didn’t really give that one much thought.

“As far as the district goes, I just really figured it out about it like two days before. My dad said ‘you’re tied right now’ and I said “WHAT?’”

Being the top scorer and the target of the opposition, Reynolds said there are times when she feels the pressure to score.

“Yeah, a little bit,” said Reynolds. “But I have confidence in my midfielders. I also just got the single season assists record for district all-time, so it’s not like I think I have to do it all myself.”

In fact, Reynolds said she thinks about lots of things before a game and not just what she needs to do to help the team win.

“I always have a game-plan in my head for I want to do individually and as a team, like, how can I get this girl who has never scored a goal to score,” said Reynolds.

“(Tuesday) obviously I wanted to get the record, but the pressure kind of got to me because I didn’t score until the second half. The having more people in the crowd there than ever before and there was a college coach there.”

Reynolds began playing soccer when she was a mere 4-years old but she has also ran cross country and is one of the top runners in the area who should make all-conference again this season.

Although she has been the top offensive player not only on the Rock Hill team but in the district, she plays the defensive position of center back (sweeper) with her club team.

“I’m a pretty versatile player and we don’t have a lot of those on my club team. Everyone is cut out for their positions and we didn’t have another center back and thy felt I was the only one who could be back there,” said Reynolds. “I don’t really have a preference honestly, just anywhere they put me.”

Speaking of the district, Reynolds said the Redwomen are now turning their sights on the postseason tournament.

“We tied Wheelersburg and lost to Minford, so we want another shot against this teams again,” said Reynolds. “If we win the sectional, we’ll probably play North Adams in the district semifinals. We’ll have to play well every game.”

With an outstanding prep career, Reynolds will focus on the future once this season ends. With a 4.0 grade point average, college coaches won’t have many worries about her being accepted into their school.

“I definitely want to play college soccer, hopefully D2 or NAIA. These are the two of the divisions of schools I’ve been talking to. Probably my most interested coach is West Virginia Wesleyan. He said as soon as I get my FAFSA stuff ready he’ll be ready for an official offer package,” said Reynolds.

Some schools have recruited Reynolds as a center back but most of the schools who have contacted her prefer to use Reynolds as a midfielder or a back.

“They didn’t specifically recruit me as one or the other,” she said. “I like doing them both. I like scoring goals obviously, but I also like being on the back line.”