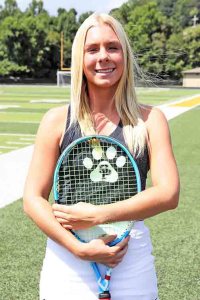 ATHENS — If tennis players wore numbers on their shirts, Meredith Riley could be only one number: 6-0.

Not 60, but 6-0 which reflects her winning scores at the Division 2 district tennis tournament Wednesday on the campus of Ohio University.

The South Point Lady Pointers junior standout swept through the competition as she beat senior Lindsey Riddle of Vinton County 6-0, 6-0, junior Katie Lovejoy of Marietta 6-0, 6-0 and in the finals senior Kathryn Nelson of Portsmouth Notre Dame 6-0, 6-0.

Riley said her past experiences at the state level should help her this trip.

“I feel like I practice a lot more and I’m more aware of what state is like, so I feel I’m more prepared,” said Riley. “My freshman year, I felt like I was overwhelmed. It was something I’d never been to before.”

Riley lost 6-4, 6-0 to Summer Mu of Shaker Heights last year in the first round of the state tournament. Riley was leading the first set 4-1 when it started to rain which caused an extended delay.

“Last year, I was playing pretty well and winning most of the match. I had to sit for a few hours and then we went and sat inside. I just kind of lost my groove,” said Riley.

As a freshman in 2020, Riley fell to senior Ellie Hire of Toledo Central Catholic by identical scores of 6-2, 6-2.

But Riley has played against some of the players at the state tournament during summer tournaments and she said it has given her more insight about some of her opponents.

“I feel like it’s helpful playing travel with a lot of them because I know how they play and how good they are. I just know a lot about them,” said Riley.

Although the goal is to win the state tournament, Riley said she plans to think short-term in her approach and focus on the opponent at hand in her first match.

“I just want to keep my nerves down and realize I can win because I’ve come close every year and I think if I just make sure my nerves stay calm that I’ll be able to do that,” said Riley who won’t know her competition until the draw is released next week.

Being just a junior should also take some of the pressure off Riley since she still has her senior year to play.

“I feel like I’ve gone to state every year and I know I’m not done,” said Riley. “I can continue to get better every year.”

During the offseason, Riley tries to play in a tournament at least once a month. But after the end of September, players are not allowed to participate in tournaments. As the only tennis player for the school, she spends her time just practicing against other people who are practicing and also getting instruction from her coach.

“”It’s just helpful when I go to practice playing against other people. I think that’s how I continue to step up,” said Riley.

While tennis is a major part of her life, education takes the forefront. Riley carries a 4.0 grade point average on a 4.0 scale.