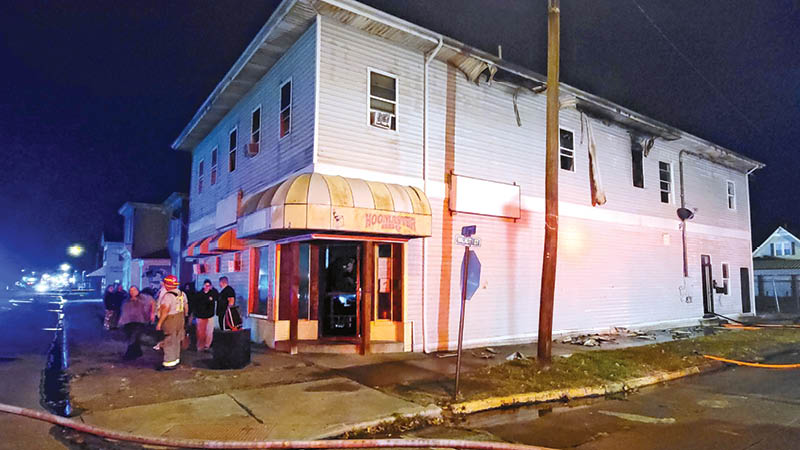 Ironton Fire Department Chief Mike Mahlmeister said the call about the fire in the apartments above Boomers bar on the corner of Third and Walnut streets came in around 9:30 p.m. and that there was the possibility of someone trapped, which turned out not to be the case.

Mahlmeister was off duty and when he arrived at the scene, a fire truck was already there and firefighters were knocking out the fire through a window. Another one was prepared to go inside.

“They took a hand line up into the apartment and they were able to knock it out pretty quickly once they were able to get inside and gain entry into the room,” Mahlmeister said. “The room was locked very securely, so we had to force our way in.”

He said there were four apartments but only two had residents renting. He added there were no injuries.

The occupant of the apartment that caught on fire wasn’t present because he was at work.

The resident of the other apartment was able to leave.

“No one was trapped,” Mahlmeister said. “When it was first called in, they said there was an entrapment, but they were able to self-evacuate by some back stairs to get out safely.”

The Red Cross was called in to assist the residents with temporary housing.

Mahlmeister said that it appeared the fire started in the kitchen area of the apartment.

“It looks like the fire started around the area of the stove and an electric heater that was in the kitchen area,” he said.

He added that it will be awhile until the apartments can be occupied again.

Boomers suffered water damage and around 10:45 p.m., people were taking things like band equipment, an ATM and the cash registers out of the bar.

“It will be a bit before they can open for business again,” Mahlmeister said.

Mahlmeister said there was a fire in the same apartment 15-20 years ago and that may have been why this fire wasn’t worse.

“When it was remodeled and I think the newness of it, with the sheetrock, I believe that it was able to keep the fire to the one apartment,” he said. “I guess a previous tragedy helped it from being worse this time.”