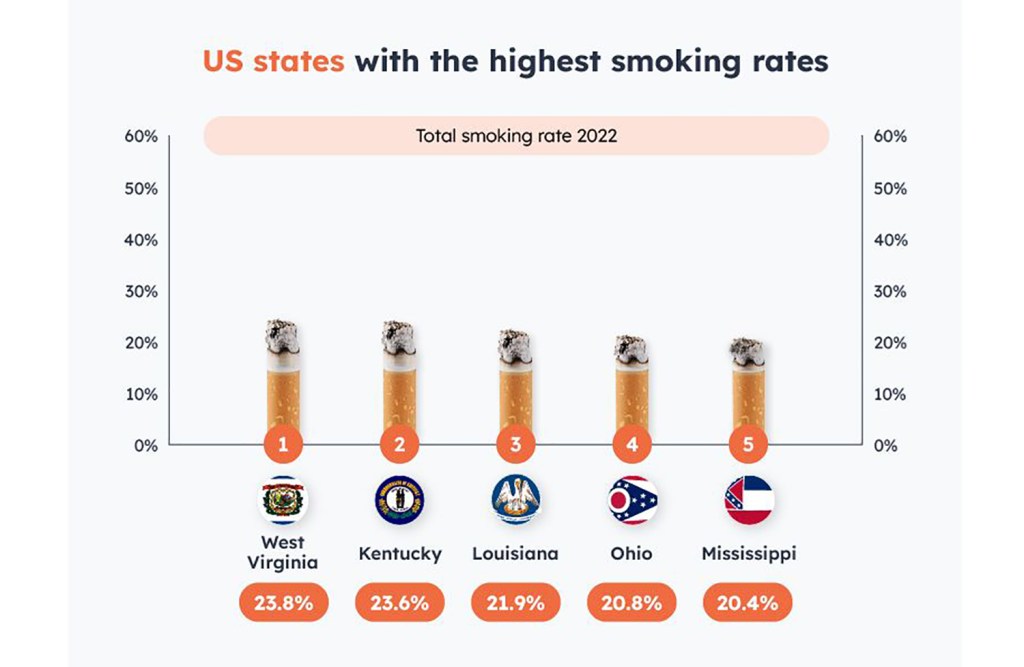 A huge portion of the world’s population are smokers, in fact, according to the World Health Organization, 22.3 percent of the global population used tobacco. The primary reason people smoke is to reduce stress, at the risk of addiction. This is because tobacco contains a chemical called nicotine, which creates a sense of relaxation when consumed.

Tobacco is one of the biggest causes of preventable deaths in the world, killing more than 8 million people worldwide, annually. It also increases the risk of a variety of health issues, such as an increased risk of a stroke, risk of multiple forms of cancer, as well as heart problems, such as heart disease.

West Virginia in the Southeastern region of the U.S. is one of the smallest states, with a population of a little over 1.79 million, making it the twelfth least populous state. Despite that, it has the highest smoking rate in the states, at 23.8 percent.

Bordering West Virginia, is Kentucky which is also in the Southeast of the US, with a population of over 4.5 million people, as of 2020. It also has a smoking rate that rivals West Virginia, being just 0.2 percent lower.

Louisiana is located in the deep South of the United States and is the 25th most populous state with 4.65 million people, despite being the 20th smallest state by area. As of 2022, the smoking rate for Louisiana is at 21.9 percent, making it the third highest in the whole United States.

In the Midwestern region of the United States lies the state of Ohio, the seventh most populous state with a little under 11.8 million people. Ohio’s smoking rate stands at 20.8 percent of the population for 2022, which is over 2.4 million smokers.

And with the fifth highest smoking rate, we have Mississippi, another state located in the Southeastern region of the United States. It has a population of around 2.96 million people and is also the lowest-income state per capita.

It also has a smoking rate of 20.4 percent, almost three times higher than Hawaii, the state with the lowest smoking rate.