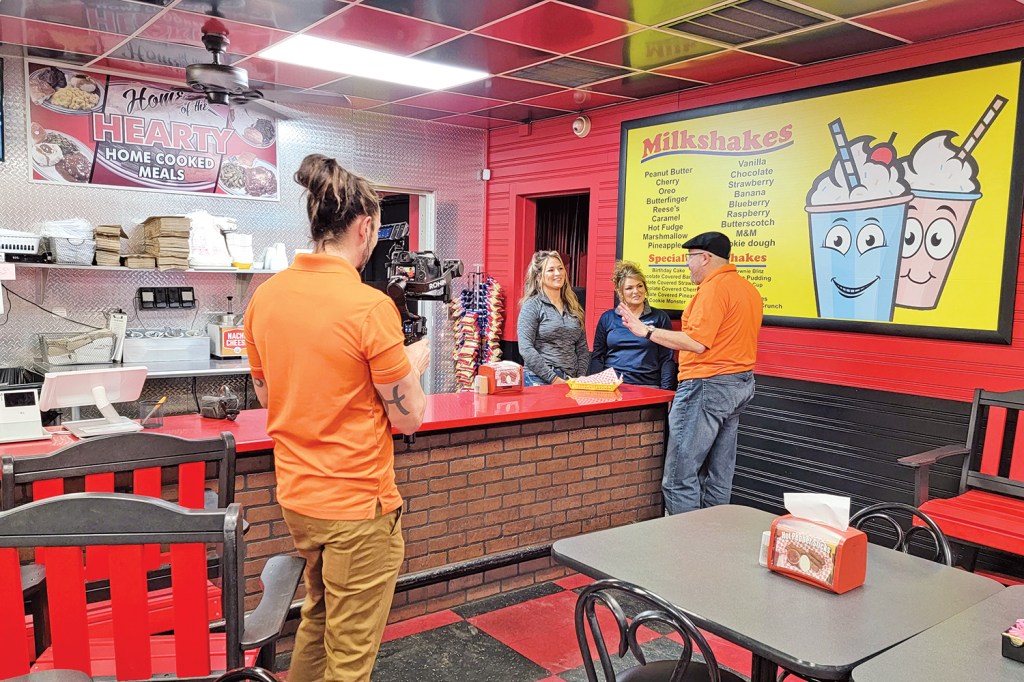 Freezette to be featured on America’s Best Restaurants

COAL GROVE — The customers who came into the Coal Grove Freezette on Monday morning got a show to go along with their meal. 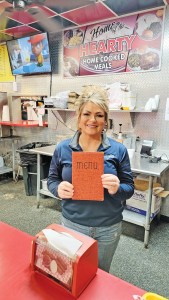 Co-owner Leah Blake shows off a Freezette menu from the 1960s. Many of the food and drink items were priced under 25 cents. (The Ironton Tribune | Mark Shaffer)

That’s because America’s Best Restaurants, which does a show about local, independent restaurants, was in town to film a segment on the Freezette and their menu.

The diner has been a mainstay of Coal Grove since it opened in 1960. Around 17 years ago, Freddie Hayes Jr. bought into the business. When the original owner decided to retire, Hayes bought it along with his daughter, Kayla Fulford, Leah Blake and Meranda Back.

On Monday, Fulford and Blake were a bit nervous about being on camera despite

having known it was coming for a couple of weeks.

“We’ve never been on anything like this before,” Fulford said.

Back in September, they had been contacted by America’s Best Restaurants.

“We thought it was a joke,” Fulford said. “That it wasn’t real.”

“Who is going to pick a small town like Coal Grove?” Blake said.

But it was indeed real. America’s Best Restaurants, a media and restaurant marketing company from Florence, Kentucky, has a mission of traveling the country to highlight the unique food of locally-owned independent restaurants. Places just like the Freezette.

Once they found out it was going to happen, Blake said they felt a bit “overwhelmed.”

It didn’t show as they were interviewed by America’s Best Restaurants’ host and executive producer Luis Rivera.

“We found out about the Coal Grove Freezette because we have a post on social media where people nominate restaurants and this one came up a lot. So that’s how we found them,” he said.

And when asked whether it was worth driving a couple of hours to taste the food, Rivera said “Let me think about it… Yes! They have great, great stuff here.”

He was especially happy with the hot dog sauce.

Rivera said they have put out over 700 shows and what they look for is “independent restaurants, because at the end of the day, they don’t get the voice, all the big guys get the attention. So we are the voice for the mom and pops, that is what we look for.”

Blake said that they hoped the segment on America’s Best Restaurants would open doors for the restaurant.

“We would like to attract people in other areas that may not know about us or may not even know where Coal Grove is at,” she said. “We hope more people visit us and see what we are all about.”

Word had already spread around social media about the restaurant being featured on the show and had attracted a person who drove 40 miles to sample their menu.

“They tried one of our fresh burgers and a hot dog and one of our specialty shakes,” Fulford said. “They wanted to get a little taste of everything while they were here.”

After completing a couple segments where the Rivera sampled a foot-long hot dog with sauce and fries and then a double cheeseburger and curly fries, Blake was happy with how it had gone so far.

After the Freezette segment is edited, it will be available for viewing on americasbestrestaurants.com and on the Freezette’s Facebook page.