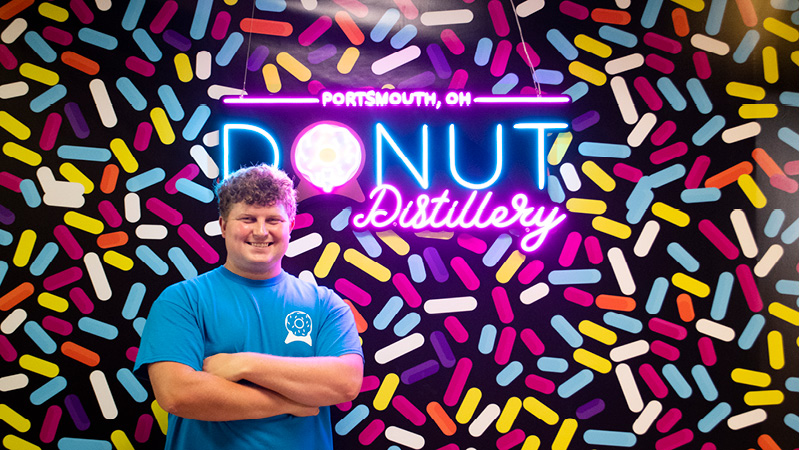 “The first three days we sold 15,000 donuts,” said Donut Distillery owner Nate Hinze. “We ran out of supplies and had to close that Monday to go to Louisville to pick up another shipment of ingredients.”

Donut Distillery started as a food truck in Nashville in 2017, and there are now two brick-and-mortar locations there — one in East Nashville and one in Assembly Food Hall on Broadway.

“My wife’s family [Shauna and Todd McCoy] started it,” Hinze said. “We visit a few times a year, and I called them a little over a year ago — they had been thinking about franchising — and pitched the idea of opening one up here in Portsmouth.”

Hinze is a Clay High School graduate and former Shawnee State tennis player. He co-owns the business with Mike Scott, whom he has known since childhood.

“He was my basketball coach when I was younger, and I was good friends with his son,” Hinze said.

Scott previously owned a business as a DirecTV and Dish Network retailer, which closed during the pandemic, and Hinze also worked for him for a time.

In fact, the downtown building in which Donut Distillery is housed, at 416 Chillicothe Street, is where the two had planned to move the previous business.

“I’ve actually had the building for about four years,” Hinze said.

And with its proximity to Shawnee State (it’s less than a quarter mile from campus) and the fact that it’s inside the DORA (Designated Outdoor Refreshment Area — which allows alcoholic beverages outside), it made sense to open their new business in the spot. Hinze and Scott worked with a local contractor to transform the space.

“We completely gutted it,” Hinze said. “We renovated the entire thing other than the floors.”

The interior, which offers plenty of seating along with a front and back entrance, is done up with string lights, bright wall art with touches of neon, a disco ball, locally crafted custom bar and of course, a sprinkle wall for selfies.

There are two main components to Donut Distillery’s menu as evidenced by its name: made-to-order mini donuts and adult beverages.

There are also standard coffee drinks and non-alcoholic Donut Shakes, made with two donuts blended in ice cream with a donut on top.

“You can mix it up and choose whatever flavors you’d like,” Hinze said. “The two donuts that you put in the shake is going to determine the flavor.”

As for the donuts, there are a dozen varieties of minis, ranging from the original Whisky Glaze (with real Tennessee whisky) to Sweet Swine (maple bacon) to the Homer D’ohnut (strawberry frosting and rainbow sprinkles) to Reese’s Cup (chocolate frosting, PB drizzle, Reese Cup chunks). Donuts can be purchased in 3, 6, 12 or 25 packs.

“Whisky Glaze is the most popular,” Hinze said. “It’s the signature.”

“Everyone in Portsmouth loved them,” Hinze said. “We got in contact with them and worked it out to where we could use the recipe. It’s only available at this location.”

There is a rotating Donut of the Month, too.

“Some of the ones we’ve done are a powdered sugar with cream filling and peanut butter and jelly,” Hinze said.

To add to the total Donut Distillery experience, Hinze is adding live music, comedy shows, karaoke and other activities.

“We want it to be a place where people can come in and hang out for a while,” Hinze said. “It’s pretty exciting, and I have a lot of ideas.”

For updates, check out the Facebook page @donutdistilleryportsmouth. More information is also available on the Donut Distillery website: https://donutdistillery.com/portsmouth.