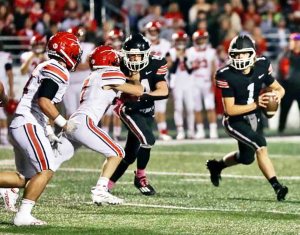 Coal Grove Hornets’ quarterback Whyatt Mannon (1) rolls out as Rock Hill Redmen’s Brock Friend (7) and Chase Delong (21) looks to keep him from getting outside. Coal Grove outscore Rock Hill 56-28 in an OVC game on Friday. (Photo By Tim Gearhart)

COAL GROVE — Chase Hall had a record-setting night as he and the Coal Grove Hornets downed the rival Rock Hill Redmen 56-28 on Friday night at Lemaster Stadium.

Hall was all over the stat book in the game. He finished the night with 247 yards on 16 carries with five touchdowns on the ground, a touchdown pass, a fumble recovery and even an interception. And on top of all that, it was a historic night for the senior, as he became the all-time leading rusher with 2,028 yards. The record had previously been held by Austin Stapleton.

The Hornets would strike first as Chase Hall would break through the Rock Hill defense with a 34-yard run to give the Hornets an early lead. Whyatt Mannon would convert the two-point conversion pass to Devin Bloomfield to give the Hornets a 8-0 advantage with 9:19 in the opening period. The scoring play was set up on the previous play, by a muffed punt and recovered at the Rock Hill 34.

The Redmen answered later in the quarter as Kordell French would take a toss to the left side, jump stop, and cut back to his right and go untouched for a 38-yard touchdown score and make the score 8-6 with 2:42 in the first quarter.

Coal Grove (6-4, 3-4 OVC) would quickly respond with an answering touchdown as Hall would score his second of the night with a 30-yard burst to extend the Hornet lead. He would also add the conversion run to make the score 16-6 with :05 left in the quarter.

On the ensuing kickoff, French would field the kick, dodge his way past the arms of three Coal Grove defenders,  and burn past the kicker for a 95-yard touchdown return and score the two-point conversion run to make the score 16-14 to end the first quarter.

Hall would be involved in all four of the Hornets touchdown scores in the second quarter. Three using his legs and one with his arm.

On a first down play, Mannon would be under duress and shovel a lateral toss to Hall in desperation. Hall would decided to let the porkskin fly to Kaden Murphy, who broke deep and hauled the ball in for the score and extend the Hornets lead to 44-28 for the halftime score.

Rock Hill (5-5, 3-4 OVC) would cut into the Hornet lead late in the half, as Brayden Adams would air it out to a wide open Chanz Pancake for a 31-yard touchdown. Hazley Matthews would add the extra point to make the score 38-28. However, that would be the closest the Redmen would get, as Hall would throw his touchdown pass one play after the ensuing kickoff.

Gavin Gipson and Kaden Murphy added long touchdown runs of their own. Murphy would account for 61 yards on the ground and 72 yards receiving in the win.

French finished the night compiling 227 yards rushing to go along with his two rushing scores and kickoff return.

As for playoff pairings, early indications suggest that Rock Hill will finish 10th in the region and be on the road against the 7th seeded Loudonville Redbirds next Friday night.

Coal Grove will be figure in as 5th seed and most likely host 11th seed Malvern in a possible “Battle of the Hornets” on Friday.