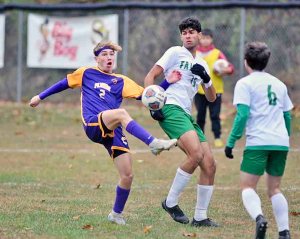 Any time a team beats a good team, they played well. And if they post a shutout against that good team, the defense had to play well.

The St. Joseph Flyers did play well and their defense played really well.

The Flyers strong performance enabled them to blank the Fairland Dragons 3-0 in the Division 3 sectional championship game Thursday.

“Our defensive backs had an excellent game. They controlled the aggressive attack from Fairland and transitioned the ball to allow our attacks to be successful,” said Balestra.

“This was an excellent team effort to bring home the sectional title.”

The sectional title was the third for the Flyers in the past four years. St. Joseph will play Lucasville Valley in the district semifinals on Wednesday. The site and time are to be announced.

Zachary Johnson scored 2 goals for the Flyers while the other score was an own-goal by Fairland. Wesley Neal had anassist.

Goalkeeper Evan Balestra had 5 saves to record the shutout.

Fairland took 16 shots with 5 on goal. The Dragons had 8 fouls, one offside penalty and 2 corner kicks.