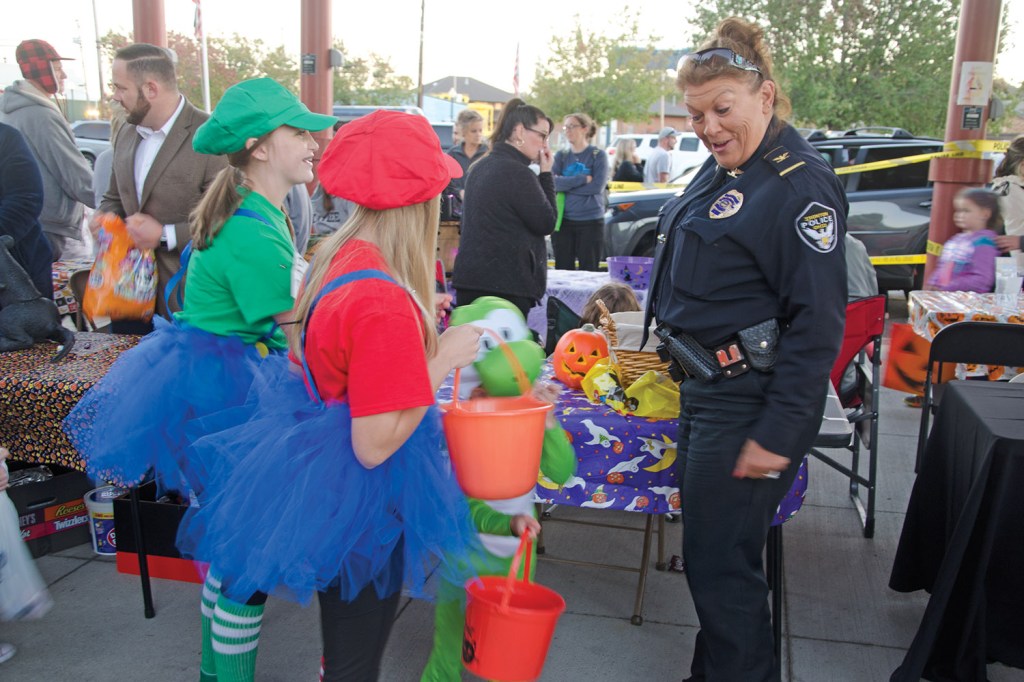 Ironton police chief Pam Wagner hands out candy at the downtown safe Trick-or-Treat in 2021. This year’s event is set for Monday. (The Ironton Tribune | Heath Harrison)

Families will take to downtown Ironton on Monday as two of the city’s Halloween events make their return.

Businesses will host a safe trick or treat, running from 5:30-7 p.m. And, this year will differ from past years in that it will be coincided by a trick or treat at the Lawrence County Courthouse, which will run during those same hours.

These events will lead into the annual Lions Club Halloween Parade, set  for 7 p.m. at the Rotary Fountain, at the intersection of Third and Center streets.

Lou Pyles, with the Ironton Lions Club, said those in costume who want to walk in the parade should arrive at the fountain by 7 p.m.

The Ironton High School Million Dollar Band is set to perform in the parade, for which the city’s fire department will close streets.

The parade will end at the lot of the Ironton splash park, where the city’s rotary club will then judge the costumes in a number of categories and by age groups and prizes will be awarded.

These events will precede the citywide residential trick or treat by a week, which is set for 6-8 p.m. on Oct. 31.

The first bit of advice was not for the trick or treaters, but the drivers around town.

“We want to tell everyone to watch their speed,” she said. “We have our smallest citizens out, who are very excited and we want them to have a great time. We do not want to have any type of accident involving kids.”

Wagner recommended kids carry a flashlight or a glow stick to increase visibility.

And when it comes to candy, she always recommends that parents check treats and make sure the packaging hasn’t been tampered with.

“There are different agencies around that will X-ray candy if you have any questions,” Wagner said. “But most importantly, if the packaging looks suspicious, throw it away.”

She said that in her 26 years on the IPD, they haven’t had a case of tampered candy.

“A lot of the stories about that are myths, but you never know,” Wagner said. “We want people to be safe and we want them to have a good time.”

She added that there will be extra IPD officers on patrol for the events.