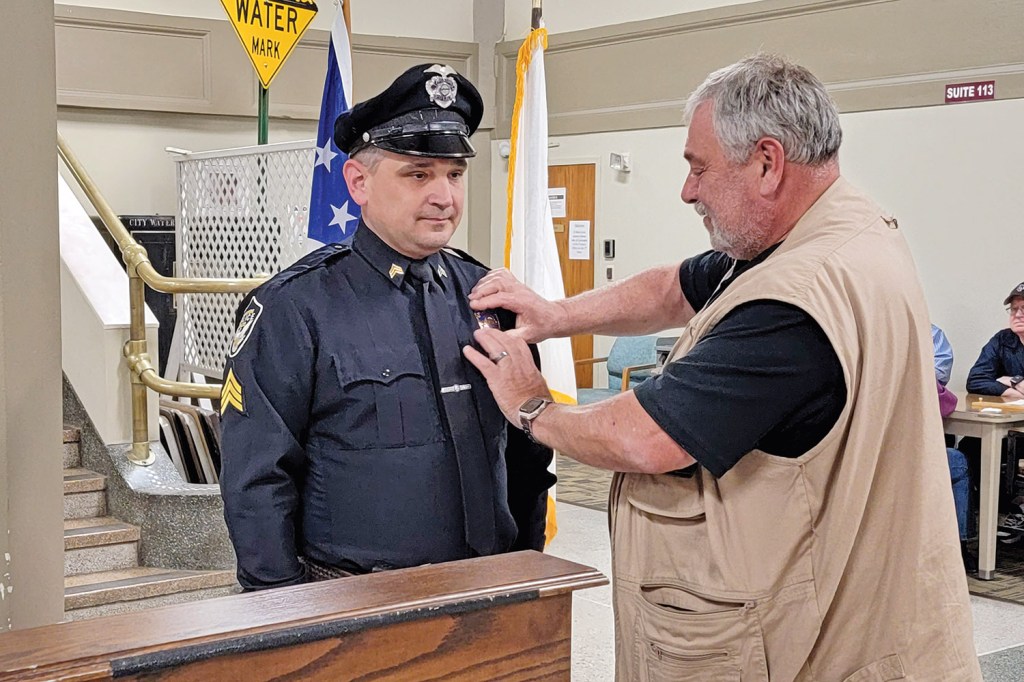 On Wednesday, Ironton Police patrolman John Hammons was promoted to sergeant. His father, Charlie Hammons, pinned his son’s badge during a swearing in ceremony in the City Center Lobby. (The Ironton Tribune | Mark Shaffer)

On Wednesday, the Ironton Police Department got a new sergeant.

John Hammons was promoted from patrolman to sergeant in the detective division, a move he was happy with.

“I think it was just time for me to move up from patrolman to being the rank of sergeant,” he said. “I got the opportunity to be moved off the road to the detective division. I think it is going to be a great opportunity.”

He has been in the detective division since 2020 and is also the IPD’s certified TASER trainer.

“I have been inspired pretty much my entire life to serve the public. Since I was nine years old, I was on the volunteer fire department with my dad.”

After graduating from high school, Hammons worked at what he refers to as a “sit down job,” but he wasn’t really happy with it. He spoke to his father, Charlie, about going to police academy.

Charlie Hammons was a long history in law enforcement, having started his career with the Scioto County Sheriff’s Office in 1986 before working on several law agencies in Lawrence County including the sheriff’s office, the Coal Grove Police Department, being the Hanging Rock Police chief and spending several years on the drug task force before he retired. He was the one who got to put the new badge on his son.

“He helped me get into the police academy and told me where to go,” Hammons said. After graduating in 2005, he worked for the Lawrence County Sheriff’s Office as a special deputy and at a heating and air company. “But I always wanted to work for the Ironton Police.”

IPD Chief Pam Wagner said she has known Hammons for years, since she was his training officer on midnights shifts when Hammons started.

“We are really proud of his promotion,” she said. “And I want to say congratulations.”

In his years with the IPD, Hammons has gotten two awards for his work.

One was helping to break up a massive bar fight in 2010 at the American Legion 590 post that then IPD Chief Jim Carey told The Tribune at the time was “pure chaos.”

On May 22, 2010, just after midnight, the IPD got a call from someone about the Legion saying “We need the police here now, they’re destroying the place.”

When officers arrived, there were 15-20 small fights going on and the officers called from more manpower.

One officer told the dispatcher, “Get us all the help you can.”

Several people were taken to area hospitals with injuries. Officers said several chairs, a big screen television set and glasses were all broken in the incident.

In another case from 2010, Hammons was part of a group of officers that helped to track down two small children that had been kidnapped from Houston, Texas and reunite them with their family.

“That was a very emotional case because it involved little ones,” he recalled.

A mother had the parental rights of her two children, ages 2 and 3, terminated because of drug issues and the two girls had been living in their aunt’s home. The mother was visiting the house and took the children. An Amber Alert was sent out nationwide and their kidnapping was featured on Nancy Grace’s nightly show on CNN.

The FBI notified the IPD that three were in Ironton and the children were found unharmed at their grandmother’s house. The mother was charged with kidnapping and unrelated drug charge.

“This was a huge, huge case,” Wagner said. “It involved a lot of many of our federal law enforcement partners. We had John and a couple other officers involved in it. It was a great outcome. It could have gone a lot different. It was a good day for the Ironton Police Department and those children.”