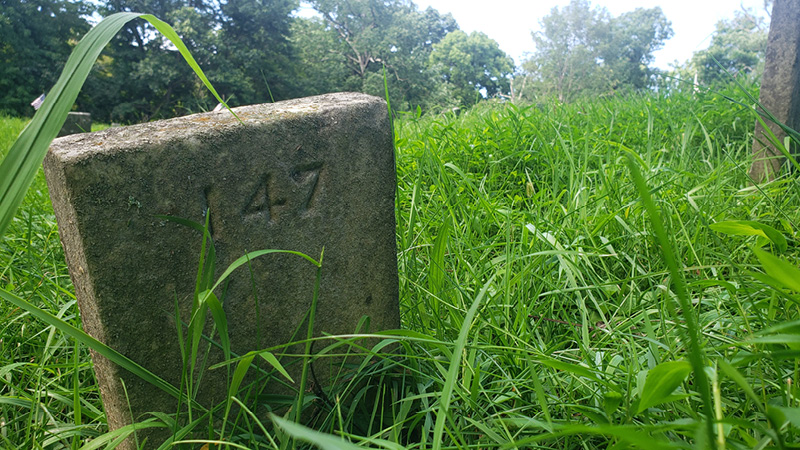 High atop a hill overlooking the city of Athens, Ohio stands the old Athens Lunatic Asylum, a sprawling facility that once housed 1,800 patients and served 15 surrounding counties. Operational from 1874 to 1993, the asylum’s grounds spread over 1,000 acres and over 70 different buildings, most of which feature the beautifully imposing architectural stylings from the Victorian Gothic era.

After a period of inactivity in the 1990s, the facility was purchased by the state of Ohio and repurposed into The Ridges, a multifunctional campus used by Ohio University for classrooms, auditoriums, museums and storage facilities.

Despite the modernized updates, parts of the former hospital remains shrouded in mystery. Still nestled throughout the grounds are multiple historic cemeteries filled with weathered gravestones marked only with numbers. Now, WHO Lies Beneath: The Asylum, a new podcast launched by WOUB Public Media, aims to put names to the numbers.

“If you go to another cemetery, you’re going to find a name and a blurb on the gravestones that say, ‘great father, loving husband,’ something of that nature.” says podcast host and co-producer Cheri Russo. “And in these cemeteries, you just don’t find any of that. If they were a woman or man, if they were married or had kids, none of that is on their grave marker.”

The new podcast is based on the 2013 documentary “The 1900: Voices From The Athens Asylum,” which was also produced by Russo and her co-producer, archivist Doug McCabe. However, the research into the anonymous tombstones has been going on much longer.

“I started working with Doug around 2009, and a lot of the work had been done by then. He started digging deeper into individual stories that we wanted to feature in the documentary, using Ancestory.com and reaching out to potential family members who were working on their genealogy. The work has been going on for a very long time.”

Unraveling the mystery behind the nameless gravestones has not been easy.

“Even before I met Doug, I know that one of the big challenges was that these records of the name that goes with the number in these cemeteries were considered protected by HIPAA, they were considered health records. Doug and the Athens County chapter of NAMI, the National Alliance on Mental Illness, worked together with State Representative Jimmy Stewart to put legislation forward that would free up those documents. That was a big hurdle, but that eventually gave them access to the gravebook, which tied the names to the numbers. And even today there are still barriers because mental health records can be considered health records, and there’s so much protection around that and each of the 88 counties in Ohio can interpret the laws differently.”

Though the process has been difficult, the search has yielded incredible results, uncovering much more than just names to match the numbers. In each of the season one’s eight episodes, a different individual’s life story is detailed and portrayed using voice actors and scripts based on McCabe and Russo’s findings. This format not only illuminates the mystery that has long surrounded the asylum cemeteries, but more importantly, gives a voice to once forgotten patients who may not have had one in life, and certainly did not in death. In the wrong hands, such sensitive material could be easily sensationalized and exploited. Thankfully, “WHO Lies Beneath” takes the higher road, opting for a more academic and mindful approach, avoiding the familiar “haunted asylum” tropes that have been endlessly rehashed by Hollywood producers, reality TV and paranormal pop culture.

“That was a very conscious decision on our part. One of the first lines I say in each episode is ‘This is a podcast about restoring dignity and respect.’ We just wanted to get that out of the way early on. If you’re looking for ghost stories, this isn’t it,” Russo said with a laugh.

“Of course you will find the theories out there about ghosts at the asylum, and I know that several of the ghost hunting TV shows have asked about filming there, but that was something that we wanted to stay away from. This is about learning who the actual person was. It was important to us to be respectful of these people, because they were people, and many of them have amazing life stories and many of them suffered unbelievable tragedy to end up where they did. And they didn’t get that dignity and respect when they were buried. The one thing all of us kind of expect is that we are going to get buried with something that has our name and our dates and a little something about ourselves on it. These people didn’t get that, so we are just trying to give that back to them.”

Season one of WHO Lies Beneath: The Asylum is now available on all the standard podcast platforms like Apple, Amazon and Stitcher, as well as through WOUB’s website. Season two is in the works. For more information, visit https://woub.org/tag/who-lies-beneath/.