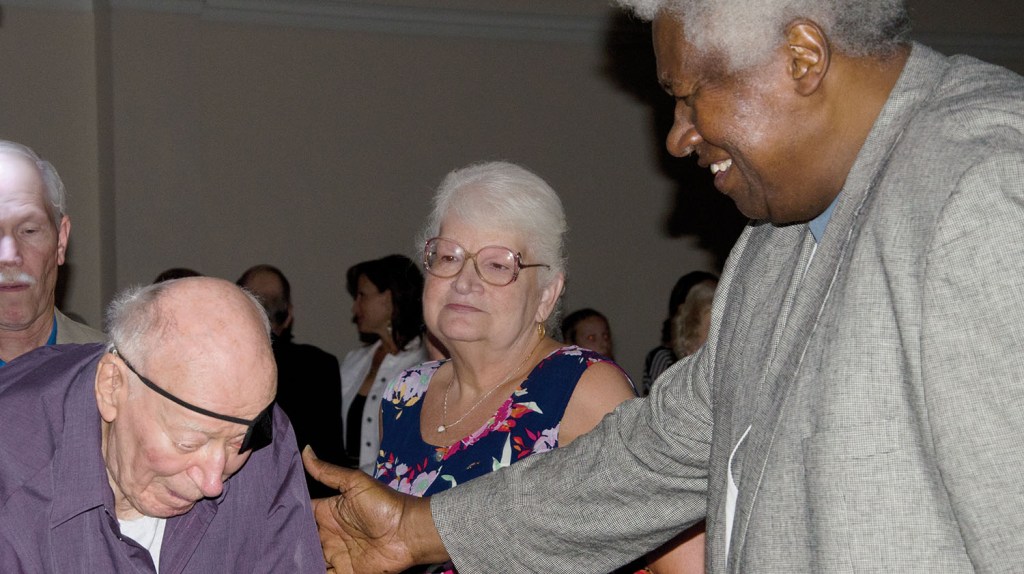 Marshall University social work professor Phil Carter, right, greets former U.S. Rep. Ken Hechler, D-West Virginia as he arrives at his 100th birthday party at Marshall university in Huntington on Sept. 27, 2014. Carter will be honored Friday with a street dedication in Huntington, as a portion of Ninth Street is dedicated in his honor. This street will meet the portion of Fifth Avenue that is named for Hechler (who died in 2016). (Photo by Heath Harrison)

This Friday, longtime Marshall University social professor Phillip Carter will be honored by the City of Huntington, West Virginia, when a portion of Ninth Street will be dedicated in his honor.

When Carter first came to Huntington to attend Marshall, on a basketball scholarship, from the Clarksburg area in 1959, the atmosphere of the city was quite different.

In one of Huntington’s three theaters, Black students were denied entry entirely, while, in another, they were forced to sit in the balcony, while an exception to the usual segregation in place was granted to Black Marshall students at a third, the Keith-Albee.

The situation in many Huntington restaurants was no different, with establishments like the White Pantry, Bailey’s Cafeteria and Thabit’s Delicatessen denying service to Blacks.

It was as a student in the early 1960s that Carter became involved and one of the leaders in protests against segregation in the city, taking part in sit-ins and demonstrations at these establishments.

At the White Pantry, the staff reacted with hostility, seizing every plate that a Black person had touched and shattering them on the floor. Carter was also attacked with a cattle prod by one of the workers there.

The protests were successful in desegregating the theaters and drew attention to the issue in the restaurants, which was settled by the passage of the Civil Rights Act at the national level soon after.

Carter left the area for a while for work, but returned in 1980, when he began teaching at the university and has, for more than four decades, trained multiple generations of social work professionals and remained engaged in activism.

When Carter was involved in demonstrations in the 1960s, he was supported by U.S. Rep. Ken Hechler, the Democratic Congress member representing the district that included Huntington.

Hechler, the only member of Congress to march with Dr. Martin Luther King Jr. at Selma, Alabama, was a strong supporter of civil rights, taking a stance that could have risked his political future in West Virginia.

Carter later got a job as a U.S. capitol police officer through Hechler’s office, something that was unprecedented for a Black student at the time.

Hechler and Carter formed a friendship and alliance that would last decades, with the congressman singling out Carter for praise during his 100th birthday celebration at Marshall in 2014.

It was at that event that a portion of Fifth Avenue in Huntington was dedicated in honor of Hechler (who died in 2016 at age 102). And fittingly, the street being dedicated for Carter this week will end on a corner with Hechler’s honorary way, leading the two to meet again.

Also of note is that the street dedicated to Carter will pass the Cabell County Public Library, which is now in the former White Pantry location, while a reception for Carter will take place at the formerly segregated Keith-Albee, showing the ultimate triumph of the tireless work of those activists of the ‘60s.

(Also, it’s worth mentioning that the one downtown restaurant of that era that survives to this day, Jim’s Steak and Spaghetti House, located just around the corner from Ninth Street, never engaged in segregation and it’s owner and founder, Jim Tweel, was a longtime friend and supporter of Carter.)

Vile establishments like the White Pantry and the racist policies they practiced have since disappeared into the trash pile of history, but, with Friday’s ceremony, the accomplishments of Carter will be enshrined for the ages in Huntington to serve as an inspiration to future generations.

This is a great and well-earned honor for Carter and we commend the city for doing this.