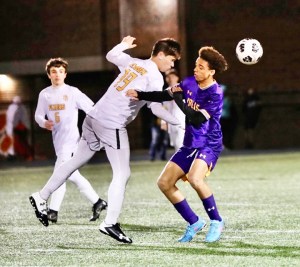 St. Joseph Flyers’ Wesley Neal (19) uses a header to get the ball past a Lucasville Valley player during Wednesday’s Division 3 district soccer semifinal game. The Flyers won in a shootout. (Photo By Tim Gearhart)

WAVERLY — The late, great ventriloquist puppeteer Shari Lewis introduced “The Song That Never Ends” during one of her shows. In fact, it also includes the words “it just goes on and on my friend.”

Wednesday night in the Division 3 district soccer semifinals, players, coaches and fans were beginning to think it was the game that never ends.

After two halves and two overtimes and the score tied 3-3, the St. Joseph Flyers won the shootout 3-2 over the Lucasville Valley Indians and earned a berth in the district finals on Saturday.

But it was defenseman Bryson “Smokey” Burcham who stepped up on offensive side with the third and deciding penalty kick goal that gave the Flyers the win.

St. Joseph (14-4-1) will face Wheelersburg who blanked Lynchburg Clay 4-0 in the first game.

The win proved the third time is the charm for the Flyers who lost two tough decisions to Valley (9-5-1) in the regular season, 5-4 and 2-1.

Flyers’ goalkeeper Evan Balestra had 19 saves and had 2 saves on Valley’s 4 penalty kick attempts to preserve the win.