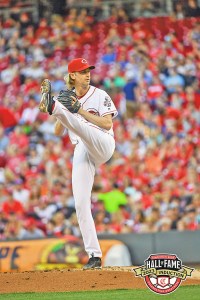 “We congratulate Bronson on his election and look forward to celebrating his exceptional Reds career next summer during Induction festivities,” said Rick Walls, executive director of the Reds Hall of Fame and Museum.

“Bronson’s accomplishments, aptitude, and influence on the game and teammates will live forever in the Hall of Fame.”

A 2006 National League All-Star, Arroyo paced the league in both innings pitched (240.2) and starts (35) that season. Arroyo led or tied for the club lead in games started seven times in his career and was the club’s leader in innings pitched in five different seasons.

In Reds history, only six pitchers have started more games for the club than Arroyo’s 279 and his career total of 1,761.1 innings pitched has been topped by only 15 pitchers in franchise history.

He won Gold Glove honors that season and finished 12th in voting for the NL Cy Young Award. In 2012, he contributed 12 victories to the 97 wins recorded by the Central Division Champion Reds, a team victory total that has been exceeded by only seven other Reds teams.

Relying on pitch location, movement and changing speeds, Arroyo struck out 1,157 batters as a Red, a total bested by only five pitchers in club history.

Arroyo will be the 29th pitcher inducted, bringing the Hall’s total membership ranks to 91.