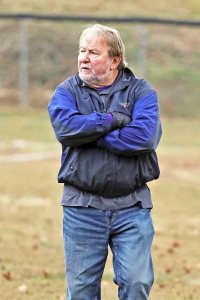 Father knows best. And now that Mike Balestra is the “Father of St. Joseph Soccer Coaches,” he’s pretty smart, too.

Now in his ninth season, Balestra has led the tiny Catholic school to an impressive 108-44 and the Flyers have two Southern Ohio Conference titles, two runners-up, four sectionals and two district runners-up. The Flyers advance to the district finals this year.

Balestra credits the lessons he learned from his father for any personal accomplishments as well as the success of his teams.

“My father taught me if you going to do something, do it to the best of your ability. As long as I coach at St. Joe that is what I will give them,” said Balestra.

“It’s the same for our players and coaching staff. St. Joe is a special place.  I had sons that went there from kindergarten through high school. The players are very respectful, disciplined and a family. We are the smallest school in the state to field a high school boys soccer team. St. Joe is always the underdog and we love it. There is nothing better than showing what a small group can accomplish with hard work, dedication and teamwork.”

Although he gets a lot of credit as the coach, Balestra points toward the players who have been a part of the program the past nine seasons.

“It is a proud accomplishment to see that our program has been successful during this period. I am proud of the players, coaches and athletic director (Greg Bryant) for the role in our success,” said Balestra.

“The 100 wins is a result of their hard work. They have bought into our system and work hard to be successful.”

Duane Johnson has spent the past five seasons as an assistant coach for the Flyers and he said Balestra is not only a good coach, but he is there for the students first and foremost.

“Really, the biggest difference I believe is how committed he is to the kids. As you know at St Joe though we get a little stipend to coach but  it’s not nearly what public schools are getting and Mike keeps doing it and has spent a ton of money out of his own pocket to improve the soccer equipment and program,” said Johnson.

“He has paid for stuff for kids who could not afford stuff. He has a true heart of gold for the kids.”

And Balestra noted long-time girls coach Dan Blair who had 91 wins did the same.

But it is on the practice and game field where Balestra makes his biggest impact as a coach.

“He stays focused on developing the kids and then the soccer side of things,” said Johnson. “We have been blessed with some great kids. Mike is really good at getting kids in the right spot for them to succeed.”

Balestra heaped praise on not only Johnson but other assistant coaches like Al Bush and Jimmy Rowe.

“I have been into coaching for years. I enjoy watching, playing and coaching sports. Al Bush, Duane Johnson, Jimmy Rowe and I have been coaching and working together for years with the St, Joe and St. Lawrence youth,” said Balestra.

“We started with some of the players we have coached over the years when they were 4 years old in the local youth soccer league. I got into coaching at the high school level when Mike Arrington asked me to be his assistant. We coached together for a year and he taught me a lot about the game. He resigned before the next season and Sissy Clyse asked me to take the program. I’ve been there since.”

Balestra understands that St. Joseph is about education and religion first but the students, coaches and fans still like their athletics and like to win. But Balestra said it’s the lessons the program teaches that have had the most impact on him.

“I believe that high school sports are an extension of the education system. Our coaches are not only there teaching the techniques of the sport and teamwork, but teaching the players concepts they can use off the field and in life. This is the most important part of coaching high school sports, not the record,” said Balestra.

Now that’s a record that can make any father proud.