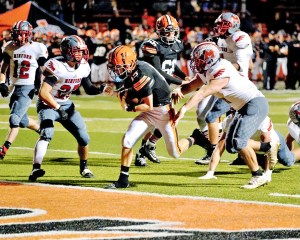 Ironton Fighting Tigers’ Landen Wilson (15) scores a touchdown in a 51-7 rout of the Minford Falcons in the first round of the Division 5 playoffs on Friday. (Photo by Jeremy Holtzapfel/HoltzPhoto.com)

Last week, quarterback Tayden Carpenter threw for 195 yards and 6 touchdowns while running for 111 in a win over Portsmouth.

On Friday night in the opening round of the Division 5 playoffs, the Fighting Tigers ran for 200 yards and 5 touchdowns in a 51-7 romp over the Minford Falcons.

“Obviously, we got off to a real good start. We was clicking on all cylinders. We got a three-and-out and then we were able to score on our first play of the possession and things got rolling,” said Ironton coach Trevon Pendleton.

“We was able to establish the running game early and then we was able to throw the ball off that. That’s the best our offensive line has played all year.”

The ground game was led by Jacquez Keyes who ran 10 times for 72 yards and scored twice. DeAngelo Weekly came off the bench late in the second half and ran 6 times for 58 yards and a score.

Carpenter still had a good night as he went 9-for-11 for 199 yards and 2 TDs. Ty Perkins had 3 receptions for 80 yards including a 57-yard touchdown catch.

The Fighting Tigers (11-0) will now host Portsmouth next Friday in the second round. The Trojans held on to upset Belmont Union Local 28-26.

Ironton forced a 3-and-out on the first series of the game and then got a 26-yard punt return by Landen Wilson to the Falcons 36.

Shaun Terry then took a pop pass on the first play and went the distance for the score. Evan Williams’ kick made it 7-0 with 9:25 on the clock.

Another 3-and-out gave Ironton the ball at the 48. It took 8 plays for Ironton to cover the ground with Keyes going the final 3 yards for the touchdown and it as 14-0 after Williams’ kick.

A third straight 3-and-out gave Ironton the ball its own 35. This time it took 7 plays to score with Wilson running 9 yards for the TD. Williams’ kick made it 21-0 as the clock expired.

Perkins came up with an interception that gave Ironton the ball at its own 43.

Another Minford punt and a 10-yard penalty on the return pinned Ironton back at its own 6-yard line.

But it took only 3 plays for the Fighting Tigers to score again as Carpenter hit Aiden Young for 19 yards, Trevor Carter ran 18 yards to the 43 and then Perkins got behind the defense for a 57-yard pass play and it was 35-0.

Ironton’s final possession of the half stalled at the 4-yard line. A penalty on fourth-and-one moved the ball back to the 9 and Williams came on to kick a 26-yard field goal on her first attempt of the season and it was 38-0 at the half.

The Fighting Tigers backups took the second half kickoff and drove 67 yards in 6 plays capped by Tyler Carmon’s 7-yard touchdown run. The key play was a 22-yard pass completion from Braden Schreck to C.J. Martin.

Minford (6-5) avoided the shutout as they drove 75 yards in 7 plays with Jeff Pica running the final 12 yards for the score with 8:41 to play. Myles Montgomery kicked the conversion.

Ironton got the final touchdown of the game by driving 80 yards in 12 plays with all but one play on the ground including the final 24 yards when DeAngelo Weekly went the distance for the score.

Minford was limited to 138 yards of offense with all but 3 coming on the ground. Pica ran 24 times for 120 yards and the TD.

The Falcons were missing four starters due to injuries including starting freshman quarterback Peyton Caudill.