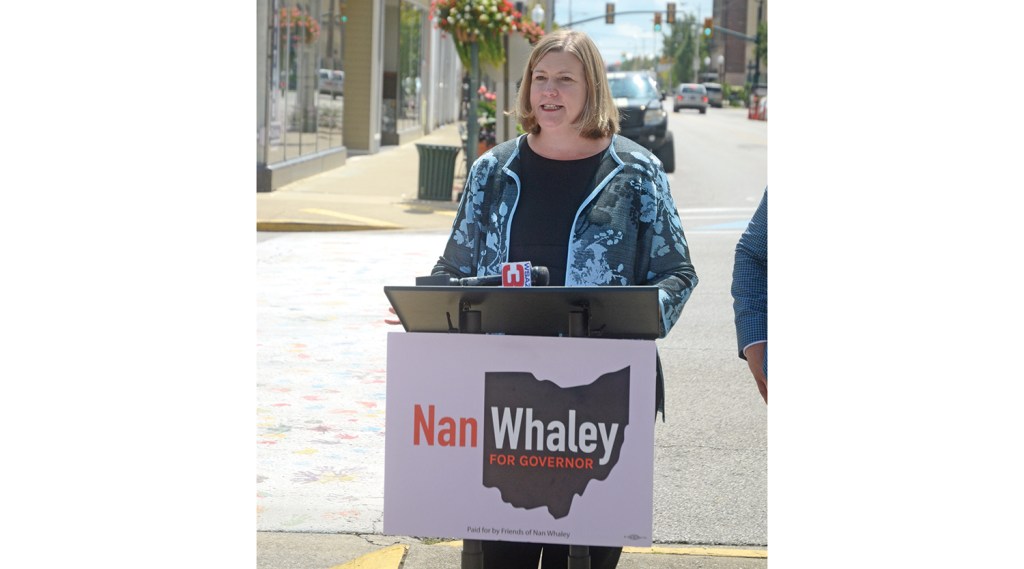 Democratic gubernatorial nominee Nan Whaley has made multiple stops in southern Ohio and Lawrence County over the course of her gubernatorial campaign, and she said she finds here the same issues and concerns as her hometown.

“I’ve been to Ironton quite a few times,” Whaley, who served two terms as mayor of Dayton from 2013 to earlier this year, said. “It’s a place we’ve visited regularly and I have a lot of respect for the folks of Lawrence County. I think it’s very similar to Dayton, frankly.”

Whaley spoke with The Ironton Tribune on Tuesday about her candidacy and said her motivation to challenge incumbent Republican Gov. Mike DeWine was to give local leaders across the state a voice in Ohio government.

“The main reason I got in this race was that I’m a local leader and I saw local leaders, Democrat and Republican, doing their level best to move their communities forward and they have no partner with the statehouse or the governor,” she said. “And, unless you live in the Columbus metro or are a leader in Columbus, you don’t get anything from these guys.”

On Whaley’s last visit to Ironton in August, she touted her plan for investing in Appalachian Ohio. At the time, she said the key difference from DeWine’s announcement of $500 million of American Rescue Plan Acts funds into the region is that her plan would be an ongoing push, versus what she said was DeWine’s one-time effort.

When asked what she would prioritize for the region, she said a plan for universal broadband service by 2028 would be first on the list.

“I think the key for southern Ohio is to have affordable and fast broadband for all areas and that is going to require government to step in,” Whaley said. “Because we know the connectivity issue. We saw it during COVID and we see kids going to McDonald’s at night to do their homework.”

As mayor, Whaley was thrust into the national spotlight in 2019, following a mass shooting at a Dayton bar, in which 10 people were killed, including the perpetrator, and 17 were injured.

Whaley, along with U.S. Sen. Sherrod Brown, D-Ohio, and then-President Donald Trump, visited survivors in the hospital. Along with 200 mayors, she urged Congress to act on gun control legislation.

She was asked how she felt about how state leaders had responded on the issue.

“Not much is being done at all, frankly,” she said. “These shootings are all too regular across our state and not just across our county. In Ohio, just this year, there have been three shootings at Friday night football games across the state, so even something as Ohio as football games aren’t sacred on this.”

She said DeWine is “too weak to stand up and make our communities safe” and that she is in favor of “common sense approaches that the majority of Ohioans are in favor of.”

Whaley said these proposals are “not extreme ideas – they’re ideas that make a difference.”

“We also have to roll back these terrible gun laws that the governor put in place,” she said. “He is bought and sold by the gun lobby. He has received the most money from the gun lobby than any state elected official over the last 10 years and it’s clear he says what is politically convenient at the time, but, when it is time to take action, he protects his power and that means he cowers to the extremists and radicals.”

Republicans currently control both houses of the General Assembly with large majorities. Whaley was asked how she would work with a legislative branch of the opposing party.

“Look – I want to be clear that this legislature is an illegitimate statehouse,” she said, referring to the redistricting controversy in which the Ohio Supreme Court struck down maps drawn by the state’s redistricting commission. “It has been ruled unconstitutional seven times by the bipartisan Ohio Supreme Court and we have extreme actions going on in this statehouse.”

The governor would serve on the redistricting commission and Whaley was asked how she would approach the issue.

“I’d follow the law – something these guys have blatantly flouted,” she said. “And the law has points about how they need to be competitive in general elections. I have no thought it won’t still be a Republican legislature, but imagine if those legislators had to look at all voters, rather than just primary voters.”

Whaley said she would also “work with the public to put pressure” on a Republican majority in getting an agenda passed.

“I know, too, that this state is a common sense state and my policies are common sense,” she said. “Both with redistricting and working with the public, I think that’s how we get stuff done.”

Whaley has said, in the aftermath of the U.S. Supreme Court’s ruling earlier this year, overturning Roe vs. Wade and giving states the power to regulate abortion, that she would seek to codify abortion rights into state law.

“We would immediately work to put it on the ballots so Ohio voters can decide,” she said. “We know it would pass. The majority of Ohioans — I think it’s around 62 percent — support Roe.”

Whaley said this would be first on her agenda as governor.

“A freedom has been lost for a woman to make decisions, tough decisions about her own body with her doctor and her family,” she said. “And this is a state that values freedom and I would work to reinstate that freedom.”

There has been no debate in the gubernatorial race. Whaley said she has agreed to take part in one, but the governor has refused.

“I get why he doesn’t want to debate me,” she said. “I’m disappointed because it shows how anti-democratic he is.”

She outlined issues she would raise in a debate.

Whaley was asked, as a challenger to an incumbent, what her argument for change is.

“Mike DeWine has been in office since I was 10 months old and I’m 46 years old,” she said. “I look at where Ironton was in 1976 and where it is now and I can’t say that it’s doing better under Mike DeWine’s leadership.”

Whaley said the state is on “the wrong track,” and that she is “offering a direct change” to communities she said are forgotten by current leadership.

“I am from a working class city and I’m a working class person who thinks we need somebody who cares about people who work for a living, and that we need to grow all of our communities, and not just Columbus,” she said.

— The Tribune welcomes all interviews with statewide candidates.